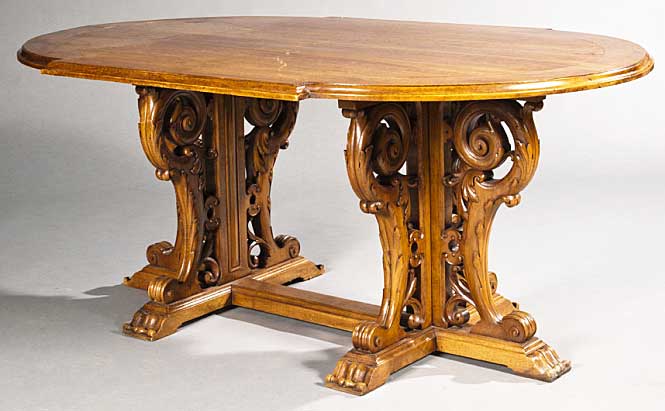 This table grabbed our attention for three reasons: the unusual shape of its top; the light-toned color of the wood; and the exquisite carving of the base.

We're not sure why oval tables were uncommon in 19th century France, especially ones used for dining, but it may have had to do with limitations on the number of people who could be seated comfortably considering that meals involved multiple courses whose glassware, serving dishes, and cutlery all vied for the limited square footage of a table top. In this instance, the oval shape enhances the visibility of the base, which for us, is a preferable rationale for choosing an oval instead of the typical rectangular top. Rather than completely oval, the table top has notches on the longer sides. Between them, the edge is straight so as to accommodate comfortably anyone sitting at the table, if dining were its purpose (but see "Uses," below).

The light-colored walnut is unusual and results in showcasing the table's carving to the fullest extent. Walnut is typically stained a darker brown although not as dark as oak in Neo-Gothic style furniture. As a result, some are surprised when they see a light-colored item such as this, which the French called noyer blond or blond walnut, meaning that the wood came from the softer and more highly valued exterior sections of old-growth trees. Antique dealers sometimes refer to it as blois naturel meaning wood that was prized for its color approximating that of unstained wood. It allows the beauty of the walnut itself, including its extremely fine grain, to shine through. Records from the Renaissance affirm that buyers in that era preferred the natural color of the wood to distinguish their new furniture from older items. Certain 19th century furniture-makers, seeking to pass their pieces off as several hundred years' older and therefore pricier, are credited with starting the fashion for staining new furniture a color far darker than this table's in a mistaken belief that "darker" equated with "older." We are delighted that the designers of this table bucked that trend.

The focal point of this table is the magnificent carving on the base, making us want to reach out and touch it, to caress the intricate carving, to marvel at the interplay of light and shadow, and then to step back and view how it all works gloriously together. An "H" shaped stretcher is the starting point for the base but with the cross-member of the "H" elongated on each end so that there is sufficient room for an elaborate corbel to terminate on it. Rising from the intersection of the members are the basic columns that form the vertical starting point from which three corbels emerge on each end.

The design of each corbel is grounded in a fundamental element of Roman architecture involving a triangular-shaped marble support that is wider at the top, to help bear the weight of a ceiling, and narrower at the base where it attaches to a wall. These were often elaborately carved and using the fashionable acanthus leaf as the decorative theme.

As did their ancient forebears, the Italian Renaissance designers who inspired this table embraced the acanthus leaf in conceiving buildings as well as furniture. Whether rolled up, unfurled, or curving gently around, it proved indispensable to Renaissance artists, architects, and furniture-makers as both a central element and a handy space-filler. It is tempting to wonder how Renaissance design would have developed without this versatile decoration based on a plant that thrives to this day, as we witness whenever we visit the Forum in Rome.

With this background in mind, we can imagine that the 19th century French creators of this table were fans of Rosso Fiorentino (the red-headed artist from Florence) and of the stucco elements he designed for King Francis I, in the Galerie François I, at Fontainebleau Castle in the early 16th century. The sacking of Rome in 1527, whose defacing of Raphael's frescoes in the Villa Farnesina is visible to this day, led to an exodus of talent pursuing the lucrative commissions that the former imperial capital and its papal court could no longer sustain. After fleeing Rome and then roaming the Italian peninsula, Rosso accepted an invitation from King Francis and arrived at Fontainebleau in 1530. "For he alone was bringing the grandness of Italian art to France and no one there had the comparable artistic knowledge to judge his performance," in the words of Rosso expert, Eugene Carroll.

Considering the king's enormous ego and the artist's ability to harness it, the resulting long and narrow Galerie had a wow factor hitherto unknown in Valois France. The elaborate stuccoes conceived by Rosso to frame the frescoes he painted in the Galerie proved a tour-de-force of Renaissance art, memorialized by engravers and print-makers for centuries thereafter and circulated widely around Europe as inspiration for furniture designers such as those who made this table. Acanthus leaves abounded in Rosso's stuccoes along with putti in mischievous poses, grotesque masques, garlands of fruits and flowers, strapwork, salamanders, dogs, lambs, satyrs, caryatids with baskets of fruit on their heads, and slouching youths. No one had seen anything like it -- before or since.

With our table, the acanthus is dominant as reflected in an unfurling, scrolled leaf at the top of each of the six identical corbels, and reminiscent of the stucco designs of Rosso and of the Roman architects who inspired him. Bits of leaves are carved intricately into the walnut, including a "crocket" or tiny curl breaking up the sweeping curve from top to bottom of each corbel. Gracefully joining leg to base is a "leg atop a leg" ending in a scrolled "foot atop a foot" and reminiscent of the stylized lion's paw that furniture-makers adored in 15th century Florence.

For another decorative use of acanthus leaves, see the armchairs in the subsequent Louis XIV style such as the following items as lovely accompaniments to this table: armchair (covered in fleur-de-lys; and armchairs (whose upholstery is a design of gold acanthus leaves against a violet field).

Just as the Galerie François I became a French triumph of Italian design, this table is unabashedly French in the beauty of the wood while evoking the style of a Florentine genius who achieved immortality by serving a French master.

For dining, this table is ideal for a breakfast area or small dining room. It could double as desk for any executive committed to preserving a masterpiece of 19th century craftsmanship and thereby inspiring all who enter his or her office. But this table's highest and best use is undoubtedly as a commanding presence in an entryway where its extraordinary base could be readily admired from all sides. Atop the table, a jardiniere from Gien or Blois in their Renaissance patterns would create an impression of grace and elegance, especially if it contained a flower arrangement incorporating acanthus leaves!