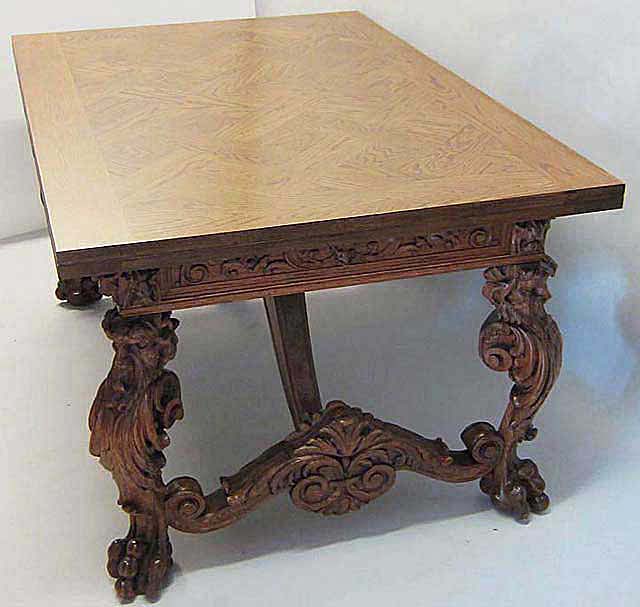 We found this magnificent solid oak frame, at one time the base for a table, languishing at an antiques auction in France. It was held together with a metal brace and was missing its top; as if someone had started a restoration project and given up. We concluded that this relic deserved a new lease on life as a dining table and dedicated ourselves to making it happen. Thanks to the skills of remarkable woodworker, George Greider, the result is a magnificent oak dining table that comfortably seats six and extends to seat ten, possibly even twelve, people. 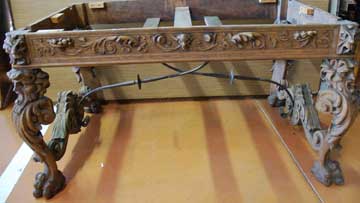 What persuaded us to take on this project was the magnificence of the four terms or figures forming the four legs of the table. A term, named for the Roman god Terminus, who was responsible for boundaries, was used in Roman architecture to delineate space such as support pillars for temples. In furniture designed during the Renaissance in France, terms were used as decorative elements providing the boundaries at either side of a cabinet and as supporting members for table tops and cabinet layers. Terms are distinguished from their better known cousins, caryatids, by being male rather than female figures. Such male figures are also known as telamons and atlantes and were used extensively by Hugues Sambin in the furniture he designed throughout his career that got its start at Fontainebleau at the time of King François I.

For this table, the figures are fantastic, in the sense of springing from fantasy -- an elongated face surrounded by bushy hair at the top and a luxuriant beard below, the mouth wide open in the tradition of the grotesque figures so prevalent in Roman design and adopted enthusiastically by Renaissance painters such as Raphael and especially Rosso Fiorentino while at Fontainebleau.

Viewed from the side,the long, flowing beard bends outward while a scroll, where the figure's shoulders would be, twirls backward and balances the outward thrust of the front of the figure. The result is a graceful curve from just below the top of the table to the base. In keeping with traditional terms as seen in roman architecture, the base takes the form of a lion's claw. All in all, these four terms are masterpieces of carving, especially considering they are sculpted from solid oak. And with their exuberant hair and flowing beards they bear an uncanny resemblance to the self-portrait that Rosso Fiorentino included in the "Elephant" fresco for King François I's Galerie at Fontainebleau (below, left). 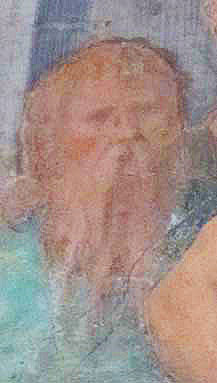 For the source of this and the balance of the decorative vocabulary of this table, our source is the Château at Fontainebleau, the hunting lodge turned into a sumptuous palace by France's King François I and his successors. To do this, François summoned some of Italy's most famous artists and craftsmen to design and execute the Galerie François I. Building on designs he had seen in Rome, Rosso Fiorentino conceived a brilliant series of frescoes on themes promoting the power and wisdom of the monarch. Tall stucco figures frame the frescoes in scenes evoking mythology, including grotesque masques, arabesques, terms, and putti at play with garlands of fruits and flowers. Bearded figures, resembling those on the legs of this table are are at the center of scenes in stucco on either side of the fresco depicting the battle of the lapiths and centaurs.

So enchanted was François I by these tableaux that he established a tapestry workshop at the Château. Six of the scenes were reproduced in wool and silk so that they could be packed into chests, taken along, and hung up to remind the king of home no matter where he took up residence in his far-flung realm. Thanks to a gift from François' grandson, Charles IX, to the Holy Roman Emperor Maximilian II upon the occasion of Charles' marriage to the Emperor's daughter Elizabeth, the six tapestries eventually ended up at the Kunsthistorisches Museum in Vienna. The one entitled Danaë is a faithful depiction of the fresco and stuccos, including the terms. It was featured in the 2015 exhibit of tapestries at the museum, entitled Threads of Power.

The designs created by Rosso made their way into prints and books of engravings during his lifetime and beyond, including a set created by Antonio Fantuzzi around 1545 (now in the British Museum) showing the terms from the Danaë stuccoes but with a different image in the middle. Even the legendary Jacques Androuet du Cerceau and Hugues Sambin incorporated these elements in their treatises from later in the 16th century on the design of furniture, including items crafted at the Château and copied faithfully by 19th century craftsmen.

As if all of this were not enough, during our visit to Fontainebleau in 2015 we happened upon a table in the Galerie François I that evokes the spirit of this one. While not original to the Château, whose furnishings disappeared during centuries past, the magnificent 19th century walnut library table has legs carved in the same spirit of fantasy. It depicts a chimera with the face of a lion, its mouth wide open and tongue sticking out, above a base in the shape of a lion's claw. 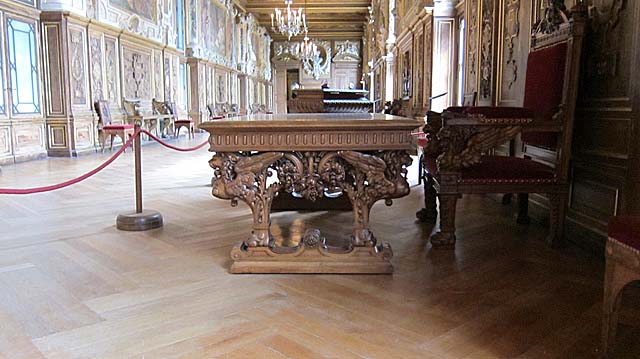 Ornamenting the frieze comprising the border of the top of this table, are more elements inspired by Rosso's designs for the Galerie François I. These include a grotesque masque with horns at the midpoint of each side accompanied by garlands, curved acanthus leaves and scroll patterns extending out to the corners where masques with prominent noses mirror those seen at the corners of Rosso's stucco designs and the tapestries memorializing them.

The top of this table complements the richness of the base. It is made from oak in a parquet design for both the main section of the top and the leaves drawn from underneath to extend it. This is in contrast to what the original top was probably like -- opening in the middle with a framework underneath on which unfinished leaves would have been placed. During this table's heyday, the top would have been extended for special occasions and covered by a tablecloth, eliminating any need for inserted leaves to be finished. Most likely, the original top warped and the mechanism for extending it no longer functioned and so the whole thing was tossed to make way for a replacement that never materialized.

This table top, on the other hand, is designed to be admired with the rich grain of the oak visible both in the main section and in the leaves that pull out from under it. The frame and the parquet are solid oak built over a special laminated base designed to prevent warping. For this project, we relied on the creativity and flawless execution of Woodwork by George. Progress photos from the project can be viewed on that website. Using a modern adaptation of the traditional extension mechanism for draw-leaf tables, this one operates with ease and represents the ultimate in convenience when converting to seat more guests.

This table is ideal for a large dining room where it should seat 10-12 people. Guests should be encouraged to bend down and view, up close and personal, the magnificent terms and the frieze!