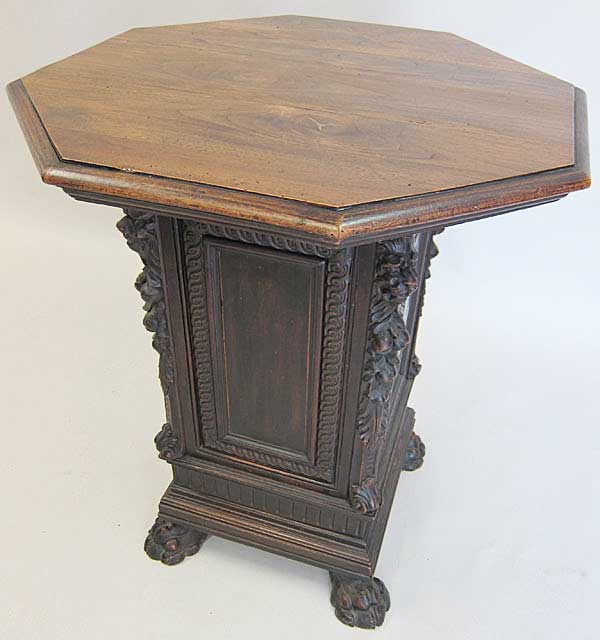 For sheer volume and virtuosity of Renaissance design elements amassed in a single diminutive item, it is hard to imagine a better example than this small table. That it is made of solid walnut and in excellent condition reflects the esteem in which it must have been held for decades in France before we acquired it.

We need look no further than Fontainebleau Castle outside Paris for inspiration in describing why we too find this table so captivating. When Rosso Fiorentino (Giovanni Battista di Jacopo) crossed the Alps and began work on the Galerie François I as part of the transformation of what had been a rural hunting lodge into a royal palace, he established a vocabulary of design that influenced painters, sculptors, and furniture designers around Europe for centuries to come. And while some of these elements seen on this table, such as garlands of fruit and flowers, were used by earlier artists including Carlo Crivelli, it was the Europe-wide dissemination of designs from the Galerie that forever link them with Rosso. Ultimately, the garlands date back to ancient times and were featured in frescoes on the walls of Roman villas. Renaissance artists such as Rafael and Pinturicchio used to descend on ropes at night by torchlight to marvel at and later to incorporate the images they discovered in these "grottoes" as "grotesque" ornamentation in their own masterpieces.

Roman architecture provided another feature visible on this table and also used by Rosso Fiorentino. It involves the human and animal figures defining a column or division on the facades of ancient buildings and found in Rosso's stucco figures in the Galerie François I. A term, named for the Roman god Terminus who was responsible for boundaries, was used in Roman architecture to delineate space such as support pillars spread out along the fronts of temples. In furniture crafted during the Renaissance in France, designers such as Sambin and Androuet du Cerceau used terms as decorative elements providing the boundaries at either side of a cabinet and as supporting members for table tops and cabinet layers. Terms, also known as telamons and atlantes, are distinguished from their better known cousins, caryatids, by being male rather than female figures.

At the four corners of this table, we do not have complete terms but rather a combination of elements creating an architectural feel for the decorative vertical boundaries. At the top is the head of a lion, its muffle intricately carved and effusive to the point of resembling a man's beard. Below the lion's head is a vertical garland of fruits and leaves above an extended acanthus leaf. At the base of each corner is a curled leaf punctuating the overall design with the acanthus, that most versatile of Roman vegetation embraced by imperial architects and sculptors.

Each of the four sides of the table is identical -- an unadorned panel framed by a border of interlaced curves. In their lack of carving, the panels allow the beauty of the walnut to shine through and function as a contrast to the elaborate carvings at the four corners. Photos cannot do justice to the rich patina of this walnut.

Supporting it all, and continuing the lion theme from the upper part of the table, is a lion's paw at each corner of the base. While definitely a French table, use of the lion's paw in a support role also has its roots in Italy as evidenced by an octagonal table in the Victoria & Albert Museum in London with a number of similarities to our table. It may even have been its inspiration, considering that the Museum's table was already at the South Kensington Museum during the 1870s.

The Museum's table is far more ornate than ours, having been made in a workshop in Tuscany, or possibly southern France, in the 16th century. It is slightly larger than ours and has eight sides to the base instead of the four for our table. Instead of unadorned panels, the space is open between the columns that also function as the table's legs. The pattern of carving on these legs is very similar to the interlocking design framing each of the unadorned panels on our table. And like ours, carved lions' paws are used as supports for the base.

The top of our table is octagonal in shape and slightly lighter in color than its base, owing to the top being made of three pieces of walnut cut "across the grain." The elements comprising the base are cut "with the grain" and therefore accept a darker stain more readily. The walnut top is especially beautiful in the grain and unique pattern of the wood, reflecting that this is old-growth walnut used in the 19th century for its sheer beauty. Furniture made in the 20th century would have been less distinctly grained and more darkly stained, as by then the magnificent old-growth trees had all been used and furniture was no longer about the beauty of the wood.

Our table's panels do not open despite the temptation to look for a secret compartment or drawer. Nevertheless, it would be ideal as an end table or occasional table in a living room or study. It could also function as a stand for statuary or ceramics as the focal point for an entryway or foyer where its artistry could be admired from all sides.