About the Owners of M. Markley Antiques

We are Meril and Michael Markley, and we are delighted to have you visit our website.

When we lived in Paris as newlyweds, we learned the antiques business from the inside out while sparking our passion for Gothic and Renaissance styles. M. Markley Antiques combines Meril's background in the Arts with Michael's retailing prowess to offer one-of-a-kind pieces by 19th century artisans who were recreating and preserving the intricately carved designs of centuries past. 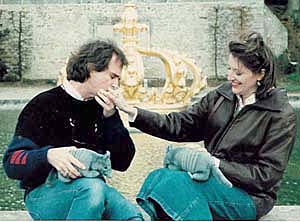 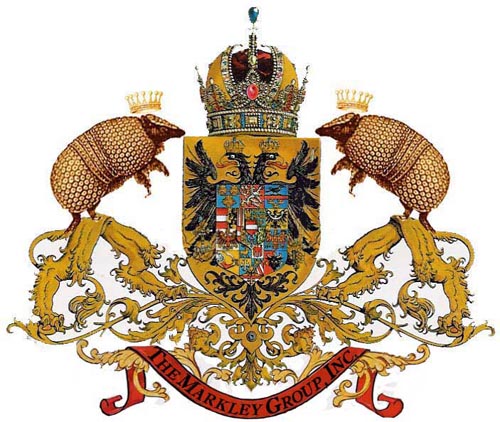 Our company logo with "armadillos rampant"

Ours is a niche, web-based business focusing exclusively on Gothic and Renaissance styles popular in France in the second half of the 19th century and coinciding with conservation work undertaken by Eugène Viollet-le-Duc at Notre Dame de Paris and other monuments of France. We offer solid wood furniture that is heavily carved yet sturdy. It yearns for another hundred years of use and enjoyment. Sourced in France (and occasionally from Italy), each item has been meticulously researched including a detailed description of its stylistic origins and current condition. 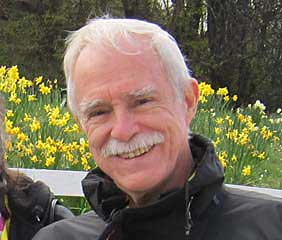 Michael Markley got his start in the antiques business by accident, when he accompanied Meril on a two-year assignment in Paris. When his promised work permit never materialized, he found himself in the position of putting his lifelong love of learning to good use – not only to find furniture for their apartment but to satisfy his curiosity about the styles and techniques that make French antique furniture both beautiful and durable.

Drawing on skills learned in his earlier careers as a lawyer, a homebuilder, a retailer and a lighting designer, Michael needed only to learn French in order to make his dream into reality and his passion into a thriving business. Thanks to the kindness and enthusiasm of many French dealers, Michael picked up the "antique French" necessary to learn the business from the inside out and to negotiate and buy his inventory.

After returning to the U.S., Michael established M. Markley Antiques as a division of The Markley Group, Inc. in order to offer the Château des Bois Collection to those in the U.S. who treasure beauty and fine craftsmanship. M. Markley Antiques combines creativity and passion while ensuring the preservation of the work of gifted craftsmen of centuries past.

Michael works with designers for large projects such as hotels, but especially enjoys working with individuals who contact M. Markley Antiques when starting or adding to a collection of Gothic or Renaissance style furniture.

His background in the entertainment business has made Michael the ideal advisor for movie, television, opera, and ballet productions looking for that "wow factor" for their set design. Pieces from the Collection have appeared in productions of Boston Ballet, the Chicago Lyric Opera, and the TV series Reign. They have also found their way into a castle on the coast of Newfoundland, a haunted mansion in Indiana, and a chateau in Nebraska.

Michael is fortunate to rely on Woodwork by George and George Greider for planning and execution when items need a highly creative approach to repair and restoration. The idea is not to make old items look new, but rather to strengthen infrastructure by, for example, re-gluing chairs so they no longer wobble and replacing missing pieces of mouldings and tracery. Sometimes this involves a total makeover, as when an empty oak framework in the Fontainebleau style was transformed into a magnificent dining table with a parquet top featuring draw-leaves.

Michael has been interviewed for numerous publications, including the U.K.'s Financial Times, about trends in the antiques business and his ground-breaking approach as a web-based dealer within a niche market (where we also sell furniture with beautifully carved niches). 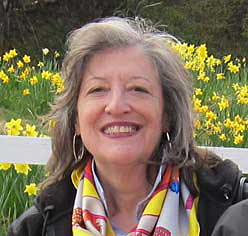 Meril Markley is responsible for research and preparation of the description for each piece offered by M. Markley Antiques. In the course of her research, she unearthed the fascinating story of the first modern corporations, founded during the Middle Ages in France, and has published several articles as well as given numerous speeches about these pioneers of free markets and capitalism.

To her task in writing about antiques for this website, she brings a background in the Arts. Her four years spent earning a B.A. degree as a Music Major in Vassar College's Skinner Hall cemented her devotion to French Gothic architecture and Gothic Revival furnishings. While at Vassar, she was an art history student of Linda Nochlin and of Eugene Carroll, who inspired her lifelong love of Italian Renaissance painters.

After Vassar, Meril was awarded a Maguire Fellowship. She studied at the Music Academy in Vienna, Austria, where she trained with the legendary Hilde Rössel-Majdan. As a coloratura soprano, Meril has sung in such iconic venues as La Scala, the Hollywood Bowl, Vienna Konzerthaus, Holywell Music Room, and Houston Astrodome.

She holds a J.D. degree from the University of Cincinnati College of Law and an LL.M. from McGeorge School of Law. Studies for the latter included course work in Salzburg and internships at law firms in Hamburg and Stuttgart. During her subsequent thirty years as a tax lawyer at global accounting firms, Meril specialized in advising clients on cross-border tax planning, including film production companies while living in Los Angeles, and global energy firms while living in Houston. Assignments included a two-year stint in Paris (during which M. Markley Antiques was born) and shorter sojourns in the U.K., Mexico, Argentina, and Brazil. She was privileged to serve for more than two years on the staff of U.S. Representative Kevin Brady, formerly the Chair of the House Ways and Means Committee.

Owing to her overseas experiences, Meril speaks three foreign languages (Spanish, French and German) and can order a beer in several more. She enjoys writing about travel, and the food and beverages that go along with it, in her columns for the Newsletter of the Wine Society of Texas.

As an outlet for her passion to preserve and promote interest in classical music, Meril previously served on the boards of organizations including Houston Grand Opera and Mercury Baroque. In 2016 she founded the Art of Business quarterly luncheon series to celebrate business people passionate about art and music.

Click on the links for a complete list of media, including speeches, publications, and videos or to see UHY's Spotlight on Meril and her career journey from opera singer to tax advisor.


If you are wondering how we get items from Europe to Texas, the answer is EDET International. For years, we have trusted the folks at EDET to pick up our purchases and pack them with loving care for the trip across the ocean. Below is a photo of EDET team members in front of one of their trucks on the rue des Rosiers at Saint-Ouen, the huge antiques market located just outside Paris. 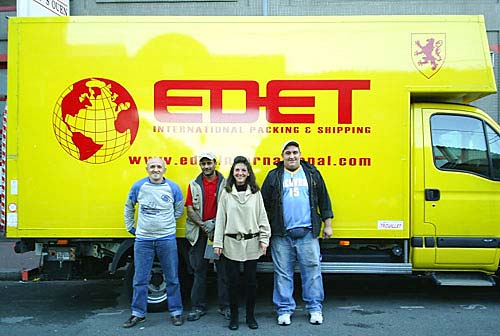 When items arrive and are in need of repair or restoration, we rely on George Greider of Woodwork by George in Houston. 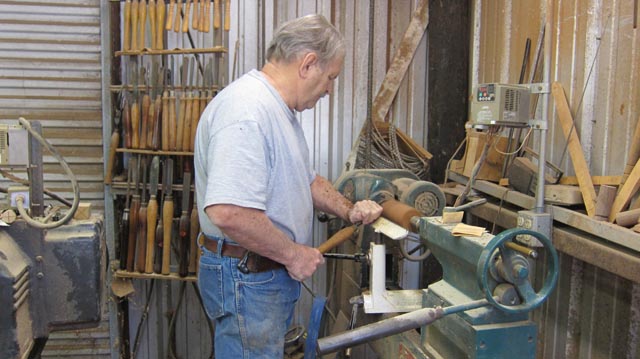 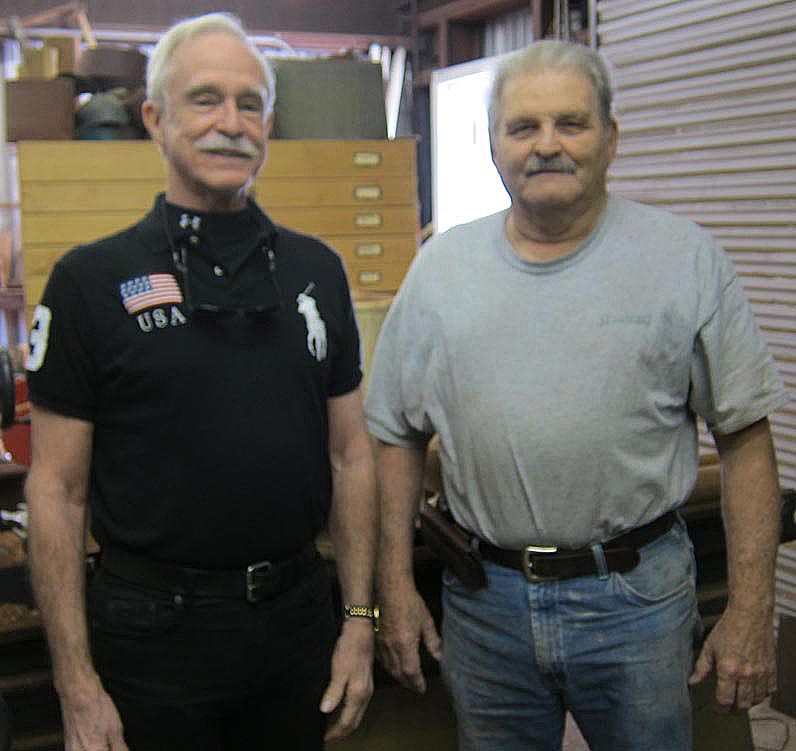 He understands the techniques used in the 19th century, which are essential to repairing and renewing furniture, resulting in pieces that will be treasured by current owners and future generations. We admire George's commitment to excellence and his dedication to preserving the output of artisans of centuries past.

When we lived in Paris, one of the most charming aspects of the antiques business was seeing the dealers with their dogs. The business required long hours in a shop and things could get lonely between customers. So what better companion than a pooch? Most were small dogs, frequently Poodles, and they all seemed uncommonly smart and friendly, just like their owners.

True to that tradition, M. Markley Antiques needed a dog too and, for close to sixteen years, Mischa filled that role with gusto and grace. Although he is no longer with us, his courageous and loving spirit lives on in our hearts.

Named after Mikhail ("Mischa") Baryshnikov, whose agility, grace, and leaping abilities he shared, our Mischa enjoyed living in a home filled with antiques but never had any accidents involving them.

While Mischa was not born into our antiques business, he got there as soon as he could. When he was a young pup looking for a home, he was taken by his owner to her job at our Internet service provider, where Michael happened by one day and Mischa promptly fell asleep in his lap. It was love at first sight. But the little puppy was already promised to someone else. With little hope that anyone could possibly decline to take such a precious creature, Michael left his phone number with the owner just in case things fell through. That evening the call came and we learned that we would soon have a dog. Before long, Mischa was home with us and fulfilling his genetic role of protector, especially when cats, armadillos, or turtles happened by the office window from which he surveyed his domain.

Although he looked like a Poodle, Mischa was a Schnoodle (Poodle-Schnauzer hybrid), combining the best of his French and German heritage. His favorite things included long walkies on the nature paths in the Woodlands, visiting with his pals, squeaking his carrot toy, snoozing in Meril's lap while listening to music of his preferred composers (Rameau and Telemann), and eating any kind of cheese but preferably Neal's Yard Colston Bassett Stilton. 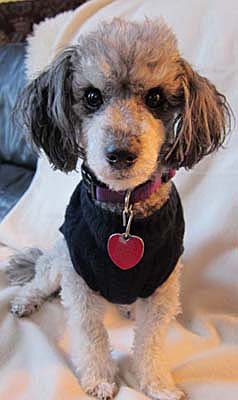 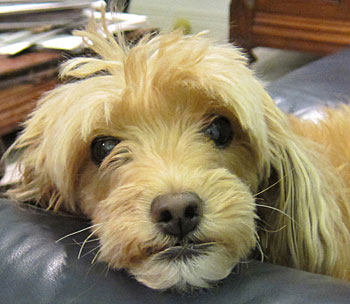 Margaux is a more recent addition to the M. Markley Antiques Team and came to us thanks to two serendipitous encounters. The first involved Mischa, who was sprayed by a skunk in the pre-dawn hours as he ventured off the back deck to begin his morning toilette. While visiting the groomer's to seek out a replacement for Mischa's violet collar that was doused by the skunk, the second encounter occurred. Michael saw Margaux, a 3½ year-old apricot Maltese-Poodle mix who was up for adoption after being rescued from difficult circumstances. It was love at first sight, just as when he encountered Mischa.

Margaux has proved a challenge in helping her to overcome the lingering behavioral problems from her former life. For example, we learned that she had lived indoors and had never experienced rain. The first time we had a light drizzle and took her for a walk, she was terrified and refused to budge. Since then, she has been adapting to a host of new experiences. Having a role at M. Markley Antiques has helped her to focus and to adjust to a stable routine Chez Markley. Her favorite toy is a plush carrot (see photo below) that she loves to shake and throw in the air or to walk around the house with it in her mouth until someone volunteers for a game of fetch.

While Mischa always enjoyed listening to music, we have learned that Margaux excels at performing and is definitely a dramatic coloratura (the same classification as Meril had during her operatic career of decades ago). During a practice session for her annual performance at Austrian National Day in Houston, Meril was surprised to hear Margaux join in, matching pitches and intervals as arpeggios unfolded. We're still not sure if Margaux was voicing her approval, howling in disgust, or aspiring to sing Queen of the Night — but her abilities have proved uncanny.

With Margaux's long, silky hair, we think she bears a certain resemblance to the star of Botticelli's Birth of Venus. This could help explain Margaux's contentment when listening to Respighi's Three Botticelli Pictures and a fondness for Gorgonzola cheese over Roquefort (although peanut butter may be her ultimate treat of choice). 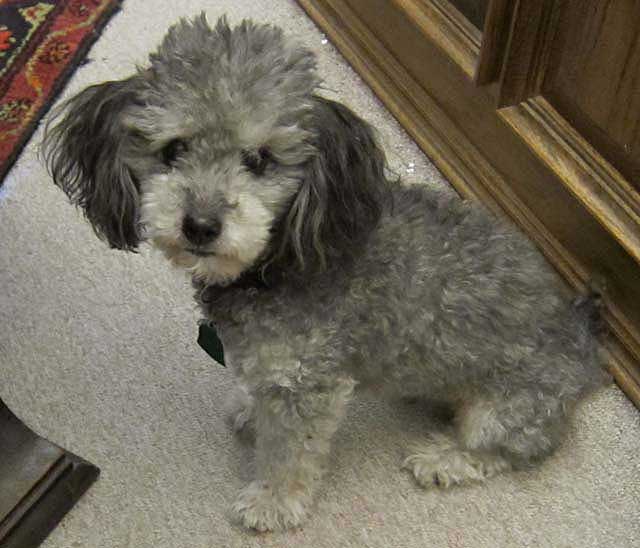 "Enough with the antiques...it's time for a walk!"

"I'd rather stay on the sofa and snooze."

We have other helpers too, such as this eager research assistant who sprang onto Michael's shoe in the gardens at the Villa Borghese in Rome... 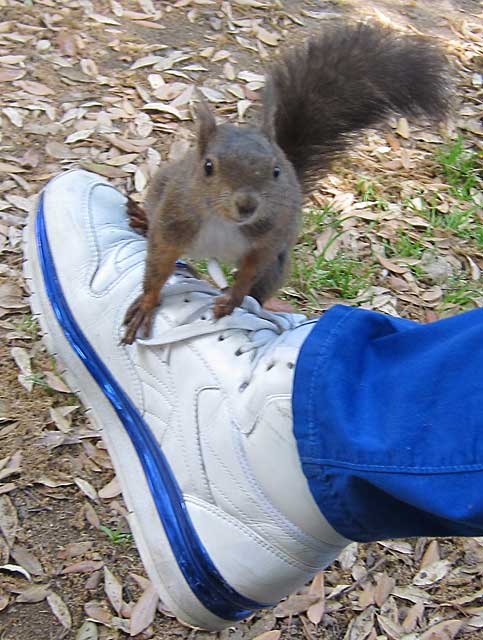 And when we head off to France in search of more exquisite items of French Gothic and Renaissance style furniture, Margaux is blessed to have a vacation of her own at Almost Home Pet Retreat in Conroe, TX.