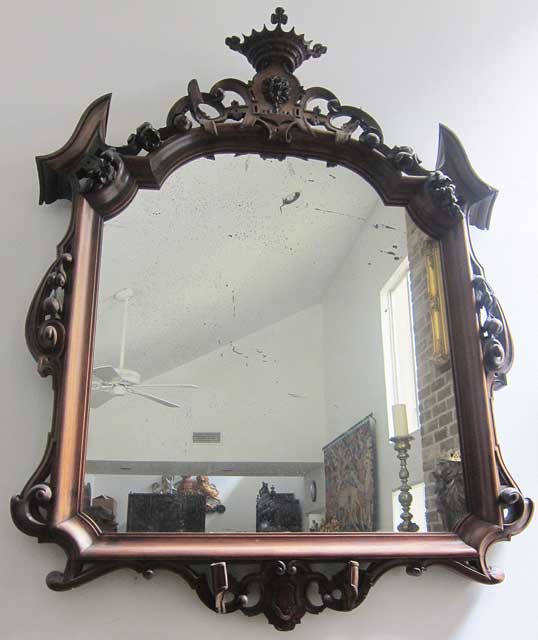 That this most unique and utterly extraordinary mirror survives in such good condition is either entirely serendipitous or the result of centuries of tender care by those who treasured it for its sheer beauty and its enigmatic coat of arms.

The glass is original and, although the silvering has deteriorated in some places, retains significant reflectivity as shown in the photos. We can date the mirror to before the 19th century owing to the wood but also because the glass is not beveled, as was typical in the 19th century.

The wooden frame is entirely hand-carved from Cuban mahogany, which is unmistakable and inimitable in its fine grain and rich, deep coloration. Such mahogany was highly treasured and scarce, even in the 18th century, but became virtually extinct and unobtainable in Europe by the early 19th century. That the frame is solid wood could never be in doubt, given its weight and the number of people it takes to hang it.

In style, this mirror evokes the Galerie François I at the Château of Fontainebleau and the combination of frescoes and stuccoes designed by Rosso Fiorentino. We might never have recognized this close connection had we not visited the Château on an unsuccessful mission to resolve an art historical mystery posed by Rosso expert and Professor Emeritus of Art History at Vassar College, Eugene Carroll. While our attention on a previous visit to the Château had focused on the frescoes themselves, our visit in 2015 broadened our interest to the decorative themes of the stuccoes framing the frescoes as we wandered the Galerie on Eugene's behalf. These elements were preserved in books of engravings and prints that inspired generations of French furniture makers, probably including the designer of this grand mirror.

Chief among Rosso's decorative motifs found on this mirror are: strapwork, chutes de fruits, or garlands, and heraldry. The strapwork is seen in the sweeping curved pieces jutting out from either side of the top. Smaller versions are found in the areas on either side of the central crest. Part of one of the smaller strapwork pieces, the one on the right, has been broken off, as seen in the photo below.

The concept of strapwork or cuir découpé goes back to medieval times when pieces of leather were cut and arranged artistically as attachments to a flat surface such as a manuscript. Often the strapwork had circular holes incised into it, as represented on the pieces of wood connecting the top part of the mirror on either side of the central crest. The larger strapwork pieces, at the outer edges of the top, draw the viewer's attention to the central crown and the unique crest. Other elements of strapwork appear in the curled shapes at the bottom corners of the mirror and the small pieces curving outward to frame the central part of the bottom.

Working closely with Rosso at Fontainebleau was the master woodworker, Francesco Scibec da Capri who designed and executed the walnut paneling for the Galerie François Ier, including heraldic designs using strapwork elements.

Heraldry played a prominent role in the Galerie at Fontainebleau since the room was designed to glorify Francis I as supreme monarch of France in a time when kings were also warriors (although not always victorious ones, as Francis found later in his life). His emblem, the salamander with a crown atop it, is everywhere including in paneling created by Scibec and in the stucco frames of several of Rosso's frescoes. The salamander was believed to be invincible -- capable of being thrown into a fire and not burning.

The heraldry on this mirror involves the crown at the top and a coat-of-arms below it. There are none of the typical symbols such as crosses and fleurs-de-lys on the crown. Instead, there are 3 three-leafed clovers around the top. Finely carved cabochons form a band below the top of the crown to represent the enormous jewels typically set into a monarch's crown.

The heraldic crest below the crown is the most unusual we have ever seen. A tall tree with a lush and bushy top is at the center. On the right side of the tree's trunk is a branch that has been lobbed off. Perhaps this symbolizes a branch of a family that died without issue, even perhaps "cut off at the knees," to explain the two pairs of unshod feet facing outward on either side of the tree. So far, our research has not identified the family associated with this crest, nor did the antique dealer from whom we acquired the mirror have any interesting tales to tell. But the crown atop the mirror implies some royal connection, perhaps cut short by the French Revolution.

The sketch for one of Scibec's designs (below), now part of the State Collection of Graphic Arts in Munich, was included in the exhibition Le Roi et L'Artiste at Fontainebleau in 2013. In the catalog* for that show, Valérie Carpentier speculates that this drawing, including strapwork and a crown, formed the basis for a portion of the paneling that has since been removed from the Galerie.

It is tempting to speculate that the designer of our mirror saw the original paneling by Scibec and was inspired to create a mirror incorporating many of the same design elements. Indeed, the mirror can be viewed as a giant coat of arms, in the style of the heraldry in the Galerie, into which a family could peer and see themselves reflected.

In his stuccoes, Rosso used chutes de fruits or lengths of fruit and flowers attached together as uniting elements, especially when draped as garlands. Here the chutes are vertical and limited to three levels of richly carved fruits. Although we have not identified the type of tree in the coat-of-arms, perhaps the chutes on either side of the mirror represent the fruits it bears.

This mirror is extraordinary in the state of its preservation, the beauty of the materials used to create it, and the symbolism that captivates us across centuries -- all harking back to the Château at Fontainebleau and the genius who created the Galerie François I.

To appreciate fully the beauty of the mahogany, the mirror should be hung on a wide expanse of wall, preferably white. It will be the center of attention in any room it graces. In keeping with the themes of Fontainebleau and François I, this mirror would look beautiful on display with chest 5154 where the salamander emblem features prominently.