Dragon Mirror 5304 in the Style of Viardot 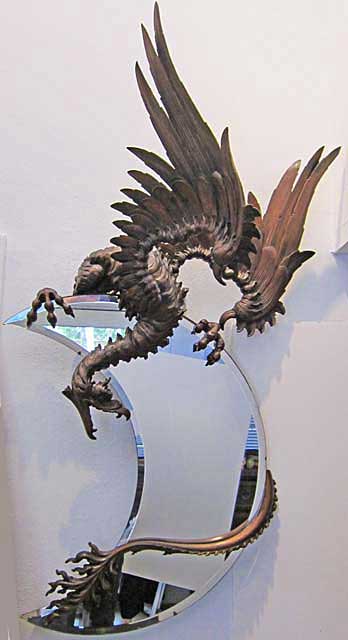 Ever since we first encountered a "dragon mirror" attributed to Gabriel Viardot (1830-1906) at the Musée des Arts Décoratifs in Paris, we have bought all we could. These mirrors fit wonderfully with Gothic style decor, what with the dragon crouching on the glass while its ample tail twists around the base. The dragon's luxuriant wings lend the look of a crouching bird of prey while its claws cling to the sides of the crescent-shaped mirror. A flight of fantasy embodied in magnificently carved sycamore.

The dragon mirrors of Gabriel Viardot had their origins not in the French Gothic Revival spearheaded by Eugène Viollet-Le-Duc with his emphasis on gargoyles and other fantastic creatures ornamenting the great cathedrals, but rather in the fashion embracing the Orient, otherwise known as Japonisme. The fascination of 19th century furniture makers and interior designers with all things Chinese and Japanese was just the latest example of the French embracing the exotic along with the iconography of distant lands.

Interest in Europe for all things Japanese arose in the second half of the 19th century with Commodore Perry's arrival in Japan in 1853 and the gradual increase of commerce with the Chrysanthemum Kingdom in subsequent decades. Woodcuts and other art from Japan were a fad with European collectors, including those depicting dragons. Artists such as James Abbott McNeil Whistler were intrigued, culminating in his Peacock Room (Harmony in Blue and Gold) that introduced the style to England.

Exotic and distinctive, Japonisme swept across France as a new fashion, but simultaneous with Gothic Revival focusing on rectilinear and other elements of architectural design and Art Nouveau emphasizing vegetation and graceful curves. The world's fairs with their expositions of manufactured goods created a passion for new and different styles amongst a growing middle class with the means to afford them. Japonisme was also embraced by ceramics companies including Gien, whose earlier output had featured dragons and other fantastic winged creatures copied from Urbinoware, the "grotesque" decoration developed in 16th century Italy.

As a young furniture maker, Gabriel Viardot caught the orientalist bug while captivated by exhibits of furniture in the "Chinese-Japanese" genre on display at the Universal Exposition of 1867. He set up a workshop to produce furniture in this style, including heavily lacquered cabinets with elaborate inlays and panels originating in the Orient, as well as beds (including "opium beds"), chairs, and mirrors. All except the mirrors look very Chinese or Japanese to us, including the dragons ornamenting the furniture.

We had not appreciated what a profound effect dragons had on Viardot until a chance meeting with antiques dealer Laurent Vanlian at Marché Paul Bert in Saint-Ouen, the sprawling antiques marketplace on the outskirts of Paris. He had a magnificent Viardot mirror on display and we loved it. Sensing a shared passion, he gave us a copy of his book, Dream of the Dragon, which is chock full of photos of furniture from Viardot's workshop.

Coming back to our mirror and the others we have sold, we would never have guessed their relationship to Viardot's Chinese-Japanese furniture because the dragons do not display oriental characteristics. They resemble more closely the gargoyles and ornamentation on Gothic Revival and Renaissance Revival architecture and furniture such as the griffins on cabinets 5183A and 5183B, and the basilisks on cabinet 5216.

Dragons have a long and rich history in European art and folklore where they lurk about in caves and emerge to menace knights such as St. George along with young princesses the knights are sworn to protect. Slaying the dragon took on heroic and ominous overtones associated with protecting the innocent but also recognizing and banishing one's own demons. It celebrated the triumph of good over evil, but not without a gory struggle.

Compared to their Eastern cousins, the dragons portrayed in Western art generally have shorter bodies, elongated snouts, and long, whip-like tails. The addition of wings makes them far more menacing than their Eastern counterparts, as they can attack from the air while the knights who oppose them remain stuck on the ground. Overall, European dragons seem more like huge airborne lizards or salamanders while Eastern ones are more akin to land-loving snakes with feet or to giant caterpillars.

One of our favorite Western versions of St. George and the Dragon is by Carlo Crivelli and on display at the Isabella Stewart Gardner Museum in Boston. Originally it formed part of the Saint George altarpiece from 1470 created for the church of the same name in the town of the same name on Italy's Adriatic coast. Incomparable master of drama, tenderness, and detail, Crivelli captures the moment when a youthful St. George raises his sword to administer the coup-de-grace to a dragon already wounded when the knight's lance pierced its lower jaw and neck. St. George's horse, its mane swirling from rearing leftward, stares out at us, eye bulging with terror. The dragon's mouth is wide open in a pose similar to our mirror's dragon, showing its teeth. With its bat-like wings thrust wide while leaning on its haunches, the dragon is rich in detail including minuscule scales and a slight beard. Incorporating a hill town in the background and a female figure (the king's daughter who had been destined to be the dragon's next victim) praying just below it, the momentous event seems all in a day's work for the courageous and comely St. George.

Apparently Crivelli's patrons loved the theme of knights slaying dragons, as another portrayal is found in a panel from the altarpiece of Saint Dominic in Fermo, now in the Metropolitan Museum of Art in New York. This panel illustrates a later point in time of the drama. A dying dragon is curled at the feet of the nonchalant and supremely confident saint who peers out at us from the panel. A wizard at recreating texture, Crivelli gives this dragon richly rendered scales, pointy claws, and even some perfectly coiffed curls of hair on its foot. Punctuating the drama that has just taken place, the tip of the knight's lance can be seen jutting from the top of the dragon's head. The mouth open to an extreme, the dragon's tongue emerges from it to touch, ever so gently and perhaps in submission, the leg of the knight below his elaborate kneepad. The end of the dragon's tail hangs over the parapet on which the saint stands, a tiny and tantalizing invasion of the viewer's space, drawing us into the drama unfolding before us.

As creatures that were not real, dragons became part of the bestiary of 19th century Gothic Revival design and imagination, fitting in with the use of intricate tracery and arches that continue to fascinate lovers of this style of furniture. How else to explain Viardot's embrace of Gothic style dragons for his mirrors instead of the Japonisme used for his furniture? We speculate that the pull of Viollet-le-Duc and the resurgence of Gothic fantasy were for Viardot irresistible.

This brings us to a mash-up of Japonisme and Gothic in two wall panels painted by the great French writer Victor Hugo (1802-1885), involving a dragon, a knight, a princess, and a crane against the black background of night. The poet, playwright, artist, and novelist created these for the bedroom of his home in exile on the island of Guernsey (and are still on display there), while including Japanese influences is his novels. All the while he adored Gothic furniture, collected it, and placed it throughout his home while conjuring a hunchback at Viollet-le-Duc's renovated Cathedral of Notre Dame de Paris. 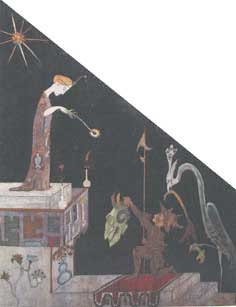 The Offering to the Maiden 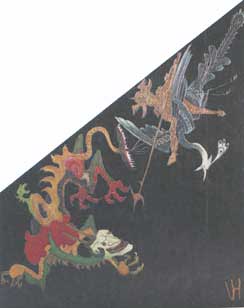 Combat of the Knight and Dragon


In the overall design of these panels, there is a striking resemblance to how the figures are presented in Uccello's version of St. George and the Dragon, acquired in 1959 by the National Gallery in London. The princess stands off to the left of one of Hugo's panels while in the other the knight aims his lance at the dragon from above and to the right. In both Uccello's and Hugo's works the dragon's legs are spread, its wings are opened out, and its tail coils upward toward the knight. However, Hugo's dragon appears to float in space, more delicate and kabuki-esque than Uccello's muscular and toothsome version. While it is tempting to speculate that Hugo's panels were inspired by the Uccello painting, our research has not revealed when he might have viewed the masterpiece owned by the Lanckoronski family and displayed at their palace in Vienna. We feel sure, however, that Hugo would have snapped up one of Viardot's mirrors had he encountered them during his final years in Paris. 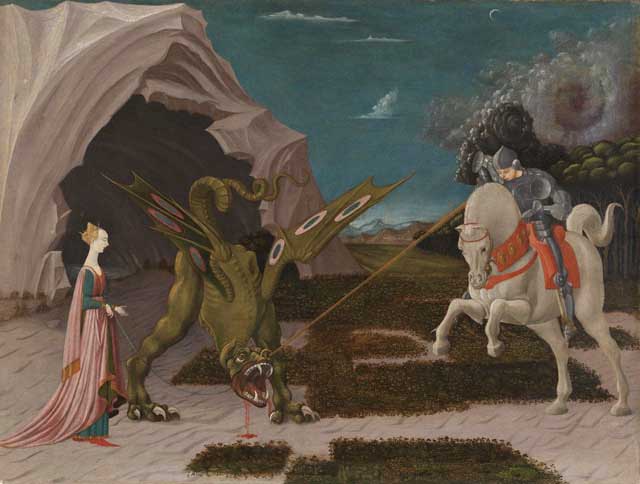 Saint George and the Dragon by Paolo Uccello


Our dragon, coupled with the mirror in the shape of the crescent moon, evokes nighttime when fantastic creatures roam the earth and populate our Gothic nightmares as well as literature from the Castle of Otranto in the 18th century through Harry Potter in the 21st.

We know that our mirror did not come from Viardot's workshop because it lacks the stamp incised into the back of goods made there. Instead, it is a faithful evocation, a homage to the master, and displays key characteristics of the mirror attributed to him at the Musée des Arts Décoratifs (and pictured above). For example, the dragon is winged and crouches above the mirror with claws grasping onto it firmly. The neck is long and twists so that the head is menacing and the eyes have an arresting gaze. Wide open and ready to chomp, the mouth includes beautifully sculpted teeth. Sweeping a broad arc above the mirror, the wing leans outward at us and is rich in detail resembling the wing of a giant bird of prey. Clenched and dagger-like, the claws are realistic, brimming with pent up force. The tail is long, elaborate, and graceful, bending around and clinging to the left side of the crescent-shaped glass.

Both our mirror and the Museum's are made of sycamore, a relatively rare wood in France at the time, and preferred by Viardot for his mirrors. The glass portion of the mirror is in excellent condition. Overall, this magnificent mirror is ready for another century of reflections and admiration evoking Gothic splendor and fantasy.

This glorious mirror deserves pride of place, for example, in an entryway or foyer. It could be placed above a low chest such as 4189 and flanked by chairs such as 4193 or 4149.