These chairs are old (possibly dating as far back as late 18th century) and are French through-and-through, but boasting a number of intriguing design elements from Italy. In overall structure, the chairs can be classified as Fauteuils Dagobert after the style of throne used by King Dagobert, the first of the Frankish Kings buried in the Basilica of Saint-Dénis outside Paris. A replica of his throne is still on display in the Basilica.

What makes a chair in the Dagobert style is the distinctive curule design of the base, where intersecting curves or an "X" define the legs and the seat. Such chairs, typically without backs but with separate seat cushions, were used in ancient Rome by political leaders of a certain rank. Images of the curule chair were included on coins depicting an emperor, seated, and receiving tributes from citizens. A variation on this design of X chair with its origins in Renaissance Italy is the Savonarola Chair.

Made of bronze in ancient times, it was not until a rediscovery of the style in the Renaissance that versions in wood began to appear. For that, we have the unearthing of Emperor Nero's Domus Aurea to thank. Nero's grand palace was supposed to take up a huge swathe of Rome after the fire of 64 A.D. but was only partially completed. It was later abandoned and eventually covered by other buildings. As the story goes, a young Roman fell into an underground chamber in the late 15th century and found some of the elaborately decorated rooms that had comprised Nero's Domus Aurea. Thought to be underground caves or "grottos" the identity of the long-buried palace was not immediately evident. Word spread about the magnificent frescoed decoration and so the leading artists of the day, including Pinturicchio and Raphael, had themselves lowered into the site on ropes while bearing torches to illuminate the subterranean masterpieces. Sadly, water and earthquake damage to the Domus Aurea make it off limits to today's artists, even without rope and torch, but the decorative bounty remains pervasive.

A decorative style became known as "grotesque," from its source in the mis-identified "grotto," and is characterized by long narrow panels filled with intricately entwined vegetation, animals, vases, garlands, and mythological beings, including bearded ones with very scary visages. These last figures also took on the term "grotesque" and gave rise to the widely used term for something distorted, extravagant, and bizarre. The designs from Nero's palace became favorites of Renaissance painters when artists such as Carlo Crivelli, Perugino, and Pintoricchio incorporated them in biblical scenes, reflecting the heights of imagination and creativity to which a basic stylistic element can rise.

This pair of chairs takes its decorative language directly from the grotesques of Renaissance design. Grotesque figures frame the central portion of the back of these chairs. Heads resembling dogs, wings instead of arms, elements of human anatomy, all combine to striking effect both in the intricacy of the carving and the overall structure. Even the teeth are realistically carved and menacing.

Other grotesques incorporated in these chairs include long, narrow faces at the tops of the arms. More frightening is the magnificent central medallion at the intersection of the "X." It is a fearsome, frowning creature meant to command the viewer's attention. Its ears morph into wings. The beard transforms into arcs of acanthus leaves, that other staple of ancient Roman design re-imagined in the Renaissance and still growing in abundance just a hundred yards from Nero's palace (see photos, below, from our recent trip to the Roman Forum).

Other figures contribute to the richness of these chairs. Each arm ends with stylized faces of dogs, mouths open with teeth bared. The central, oval panel of the top of the chairs is comprised of a lion's head, the face seeming to float out at the viewer yet embodied within an intricately carved mane. In its right paw, the lion supports a shield, although no inscription is visible.

The "X" members themselves are beautifully articulated by an interlocking circular design, typical of Renaissance furniture in France, and ending with the flourish of a scroll. The front and back "X" shapes are connected at the base by turnings.

The seat platforms of the chairs have been covered in green velvet to match the plush, removable cushions designed for seating. This upholstery does not appear to be original, but it is in very good shape and would not need to be replaced. We find that the rich, green hue reminds of acanthus leaves in springtime.

One of the chairs has had a very old repair to the back (shown below), presumably to deal with a split. The wood itself is a dark, rich walnut whose grain is almost invisible. This is further evidence that the chairs could be as old as late 18th century.

While we might be tempted to call these chairs "baroque" for the exuberance and elaborate nature of design and carving, they nevertheless fall squarely within the Renaissance style due to the incorporation of grotesques and the overall "X" design. These chairs are also a reminder that the Renaissance in France involved a heavy influence from Italy, whether the furniture craftsmen brought by Catherine de' Medici from Florence when she married the future King Henri II, or artists such as Rosso Fiorentino who spent years at Fontainbleau Palace overseeing decorative workshops and inspiring innovations in design that radiated out across the country.

Like all our chairs, these are sturdy and comfortable for sitting. That being said, they're probably more fun to view without a sitter obscuring the back panels. It is remarkable that they have been preserved as a pair and therefore they should have pride of place in an entryway, living room, bedroom, or library.

The following illustrates how these chairs have been used in a library setting. 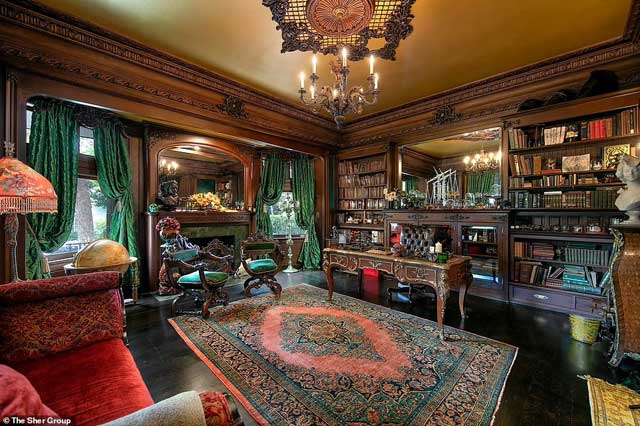 Additional and detailed photos of Chairs 4193