We adore the sgabello style of chair and have little ability to resist when it comes to buying them for our collection. Not meant to be sat upon (although ours can be), they are intended to be admired — preferably in pairs — as examples of Renaissance furniture design at its most scrumptious. To achieve this objective, these chairs needed a critical and creative intervention, as detailed below.

For more about the origins of the sgabello (in French, an escabelle) and the decorative elements commonly present on sgabelli, see Bench 5220. As with Bench 5220, this pair of chairs is rich in elements traceable to the Italian Renaissance, including through the Galerie François I at the Chateau of Fontainebleau as created by Rosso Fiorentino and preserved in prints and engravings circulated around France to inspire furniture makers for centuries.

When these chairs arrived from France, the backs were seriously unstable because the open carving, intricate yet fragile, invited damage when moving or sitting in the chairs. Master woodworker, George Greider at Woodwork by George, suggested putting a panel of wood behind the central design to stabilize the structure while preserving the carving.

The chairs are now sturdy and can be used as seating, although this would obscure one's view of the artistry that makes them unique. The magnificent carving is safe and highlighted against the slightly darker backdrop of the reinforcement.

These chairs caught our attention because of the unusual element of the portrayal, at the top of the chairs, of a young man with luxuriant hair. The rendering is so lifelike and the expression so genuine that it leads us to wonder who the model was — perhaps the son of the carver or of the patron who commissioned these chairs. The earnest expression and intelligent gaze convey a sense of calm and confidence despite how small the figures are in proportion to the rest of the chairs. Isn't this someone you would want to sit down with and engage in conversation? He must have an intriguing story to share.

The young man wears an elaborate cap whose top flops over in the Phrygian style dating back to ancient times. Back then, the cap was associated with the cult of Mithras, who apparently wore such a cap when killing a bull in his quest to secure eternal life. Artwork depicting this scene, from the time when Rome ruled Britain, was found in London when excavating to lay the foundation for what is now the European headquarters for Bloomberg. It can be viewed at the London Mithraeum. There is also this action-packed Roman era statue in the British Museum depicting Mithras in his Phrygian Cap. 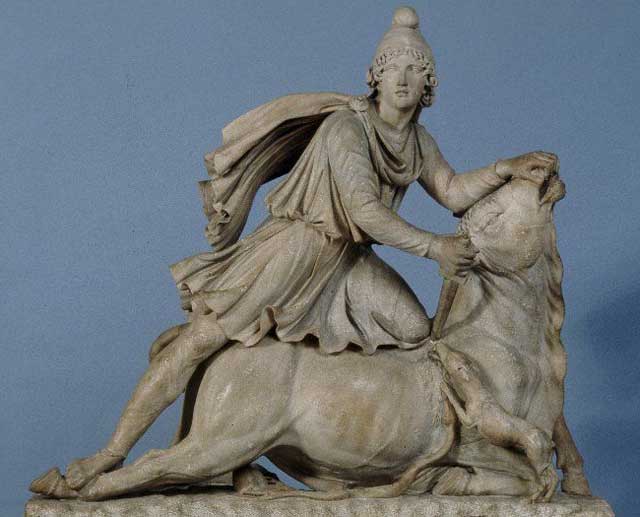 We have found no instance of the Phrygian Cap in Renaissance Italian art and so we speculate that its use on these chairs involves a 19th century French furniture designer "tipping his hat," so to speak, in honor of the French Liberty Cap or Bonnet Rouge. The cap became all the rage with tax protesters during the reign of Louis XIV. A century later, it was adopted by the sans-coulotte revolutionaries in Paris in 1790 after seeing such a cap, made of red cloth, on a statue representing liberty. Outside of France, the Liberty Cap appears on a seal of the United States Senate, below, and the Department of the Army. It was also the preferred head-gear of Smurfs, below, the Belgian comic book characters who live in a forest. 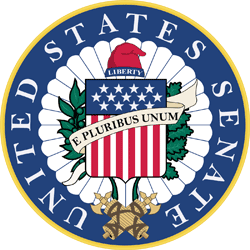 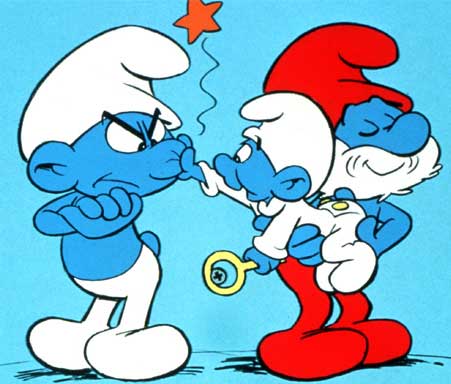 Reflecting political neutrality in our modern era, the tops of the caps on these sgabelli have been pointed in opposite directions. Below each cap is luxuriant hair flowing freely in the Renaissance style known as zazzero or mop-head that originated in Venice and spread throughout the peninsula. Wealthy young noblemen sported this hairdo under a soft wool cap without the point characteristic of the Phrygian Cap, as shown in the following famous portraits from that era by Raphael (1483-1520) and Botticelli (1445-1510). 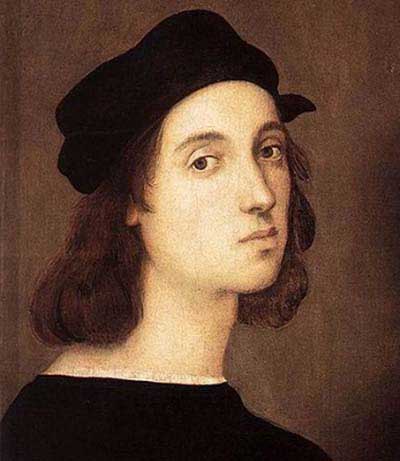 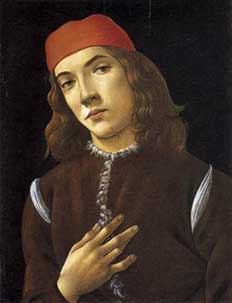 Below the male head and dominating the central part of the back of each chair is a classic figure from grotesque decoration, a putto or young male child, shown as head and torso surrounded by curving acanthus leaves.

Such figures were found in the decoration of Roman Emperor Nero's Domus Aurea in Rome. The frescoes in its buried remains were discovered and copied (by torchlight after lowering themselves into the "grottoes") by Renaissance artists such as Raphael and Pinturicchio. Raphael included such figures in his frescoes for the Vatican and at the Villa Farnesina in Rome where the following is a variation on the theme. 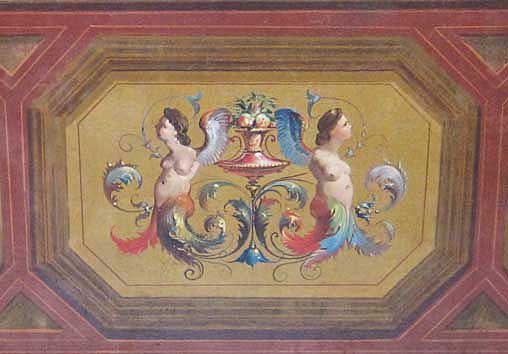 Raphael's helper on these projects, and his most gifted pupil, was Giulio Romano (1499-1546). At the height of his talents Giulio designed the interior frescoes of Palazzo Te outside Mantua, a pleasure palace for Duke Federico II Gonzaga. A triumph of grotesque decoration in the Mannerist style, the Palazzo's Sala delle Imprese includes the following wonderful figures in the spirit of the putti on our sgabelli.

These energetic figures are clearly enjoying themselves while they frolic amidst the tendrils of vines, arms outstretched. As on our sgabelli, acanthus leaves also provide attire for their lower torsos. Giulio's putto (on the left, below) lacks wings but in our case the intricate carving (on the right) includes acanthus leaves that appear to double as wings or arms. Both sets of putti have the tousled hair characteristic of Giulio's Mannerist designs. 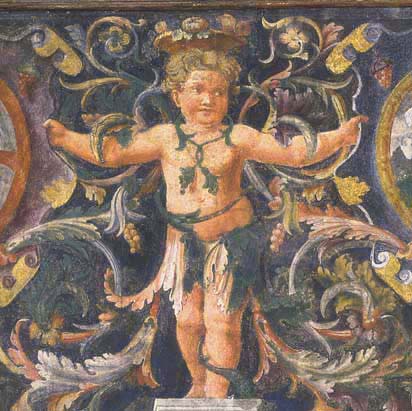 Forming the frame of the back of our chairs, in exuberant and exquisite detail, are carvings of other decorative elements typical of the Mannerist style including scrollwork as well as strapwork with an interlaced design.

The same motifs are employed to frame the base of the chairs. They are reminiscent of the decorations in stucco designed for the Galerie François I at Fontainebleau by Rosso Fiorentino and an indicator that the designer of these chairs may have visited the chateau or consulted books that depicted Rosso's works.

The seats of the sgabelli are typical in their design. In a square shape overall, they have a circle in the middle. The inner portion of the circle is indented, reminding us of a dinner plate. The space between the square and the circle is embellished at the corners by designs in low relief of acanthus leaves unfurling on a stippled background. Each seat has a crack visible on its face, a seemingly inevitable characteristic of sgabelli as they age.

The base of the chairs has the classic sgabello shape, tapering inward from the seat to just above the feet where it flares out to end with a flourish in a figure of double scrolls.

In the center of the base, surrounded by strapwork, is the tiny, intricately carved figure of a dolphin including scales and fin against a stippled background.

The dolphin was not uncommon in coats of arms, especially in Renaissance Florence where it was used by the Pazzi Family. Unlike their dolphin, whose head is at the top, ours has the head on the bottom. For more about the history of dolphins in French heraldry and their connection to heirs to the throne of France, see Cabinet 3094A. The position of this dolphin, with its head down and to one side and with its tail forming an arc at the top, is referred to as torqued. The torqued dolphin, used as an armrest, was a favorite device of the Renaissance master, Carlo Crivelli (1430-1495), as seen in this painting at the National Gallery of Art in Washington, DC. 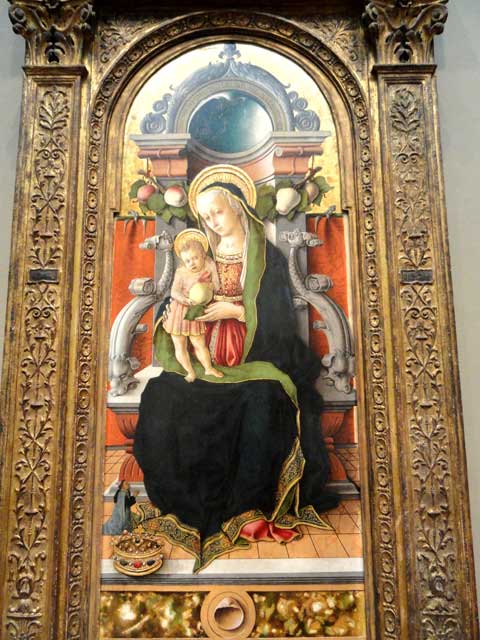 Another example of dolphin armrests is on our throne chair 4127.

The appearance of dolphins on these sgabelli may also be a nod to the Dauphiné region of France whose medieval ruler was known as the Dauphin, the French word for dolphin. This part of France, included with other mountainous areas both in Italy and France, were the legendary home of sgabelli first invented by dwellers high atop Alpine passes during their long winters of snow-bound isolation (and plenty of time to indulge in creating imaginative and intricate carvings). It did not take long for the design to be adopted and for chairs to be produced in the workshops of urban areas in northern Italy and then in France.

Below the dolphin is an exquisitely-carved grotesque mask. Usually, these faces are the main feature of the base of a sgabello but here the figure is smaller, as if ceding prominence to the dolphin as an important heraldic symbol.

With protruding eyebrows and spiky hair, the grotesque mask appears to be wedged within the scrollwork of the base and peering out to startle us. Such figures were found commonly in frescoes on the walls of homes throughout the Roman Empire. Speculation is that they were designed to entertain the inhabitants or perhaps to frighten their children into better behavior. Designs were embraced by Renaissance Italian artists as an important part of their design vocabulary, including Rosso Fiorentino's work in France.

Taken as a whole, these sgabelli are a triumph of Renaissance design with a distinctly French accent. They are ready for many more decades of being admired and treasured.

Ideally, these chairs would sit in an entryway on either side of a chest, such as Item 3213, also made of walnut and reflecting elements of the Fontainebleau style.