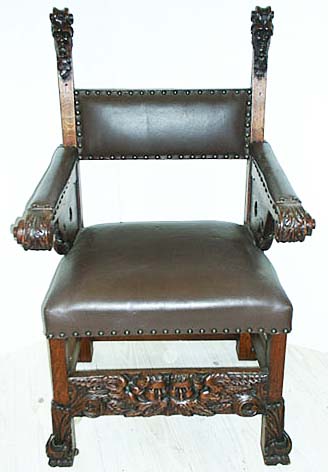 This impressive armchair combines the grandeur of a Renaissance throne with the comfort of a leather seat and the warmth of intricately carved oak. Taking his cue from the basic Tuscan armchair design (see item 3301), the French creator of this chair broadened the size, used more massive pieces of solid oak for the frame, and made the decoration far more elaborate.

Unlike chairs made in the Renaissance, whose back was left plain with the expectation they would be pushed up against a wall, this armchair has an elaborately carved back and sides so that it is designed to be enjoyed and displayed from all angles.

Unlike chairs made in the Renaissance, whose back was left plain with the expectation they would be pushed up against a wall, this armchair has an elaborately carved back and sides so that it is designed to be enjoyed and displayed from all angles.

It incorporates several standard decorative elements of Renaissance design. For the stretcher across the front there are twin designs of angel heads or angelots. The front of the arms ends in a stylized scroll or volute. The center of the back, on the reverse side of the chair, is an elaborate grotesque.

This fantastic ornamental design can be traced directly to frescoes by the imperial painter Fabullus in Nero's Domus Aurea in Rome. Adapted enthusiastically by Italian painters who rediscovered the ruins of the emperor's house in "grottoes" (hence, "grotto-esque") beneath 15th century Rome made its themes their own. The grotesque as design element crossed the Alps to France in the pattern books of the artisans brought to France by Catherine de' Medici when she married the future King Henri II.

As interpreted in this chair, it is typical of the stylized human head with a wild-eyed look and surrounded by swirling patterns of foliage. Other grotesque figures, in this case matching ones, are at opposite sides of the top of the back of this chair. Taking the place of the simpler finial seen on Tuscan armchairs, these grotesques lack the typical foliage of Italian design but the mouth is wide open as with those adapted from the original, ancient Roman designs.

Supporting each arm is an intricately carved, coiled dolphin, another classic Renaissance design theme (see item 4157) representing the heir to the throne (the dauphin) and suggests a special symbolism in this case. Just as the heir supports the king, as symbolized by the throne, the dolphin or dauphin supports the structure of this throne. Perhaps owing to this monumental task, the interior side of the right arm of the chair has a crack running between the hole (the center of the coiled dolphin) and the back vertical support but is aesthetic rather than affecting the chair's structural integrity. The upholstery is brown and does not appear to be leather. We have left it in place pending the buyer's selection of an alternative, such as a caramel-colored leather to complement the patina of the oak.

Commanding yet comfortable, this chair is ideal at the head of a dining table, or as an occasional chair in any room where its magnificence can be displayed and appreciated from all sides.