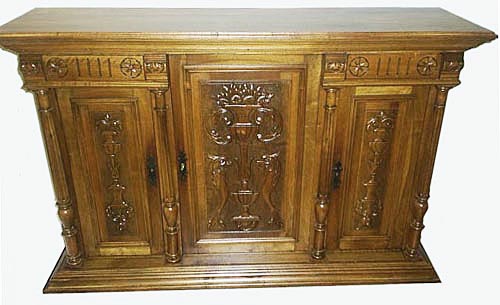 This cabinet dates from the first quarter of the 20th century but sports an abundance of Medieval and Renaissance motifs. The center door has a carved motif of urns with flowering leaves and fruit, contained therein, and overflowing as well. There are two dolphins flanking this stack of elements.

The fish are an allusion to the French word "dauphin" which means both 'heir to the throne' and 'dolphin.' The reference dates back to Guy VIII, Count of Vienne (the principal city in the Dauphiné region of France), whose coat of arms included a dolphin and who had been nicknamed the 'dauphin' from Dauphiné. Guy's descendant sold his holdings to King Philippe VI in the 14th century subject to the requirement that the heir to the throne assume the title "dauphin." Subsequent heirs to the throne incorporated the fish in their coats of arms with one of the best known being that of the future King Charles VIII of France (reigned 1483-1498, known as "the Affable"). Perhaps if he had chosen a more fierce symbol such as the lion or salamander (see item 5154) he might have survived the fatal and reign-ending accident in which he hit his head while passing through a doorway.

The two smaller doors on either side of this cabinet are similar, with carvings of urns and their contents, but are dolphin-free, as is the best tuna! All of the doors are flanked by fluted walnut columns. Directly below the top are carved, detailed support corbels including incised flowers. The elaborate mouldings below the top and near the floor, above the front bun feet, express the architectural spirit of the piece.

While the front, sides and top are all solid walnut, the interior shelf that runs the width of the cabinet, and the back, are both oak. This is in keeping with construction techniques in the 20th century. All hardware is original, locks are functional and keys are included. The cabinet has been refinished by our expert craftsmen, and gives almost a "Showroom" appearance. As with everything we offer there are no structural problems, stains or burns to contend with.

As so often happens when trying to photograph solid walnut furniture, there is a variation in the color in the photographs caused by the lighting and the angle. The color that is truest to the piece is that in the picture at the top of this page.

This unusually shallow, 3 door cabinet is a perfect piece to use in an entry hall or behind a sofa...and also to contain a goodly amount of those family treasures that pile up in all our homes.