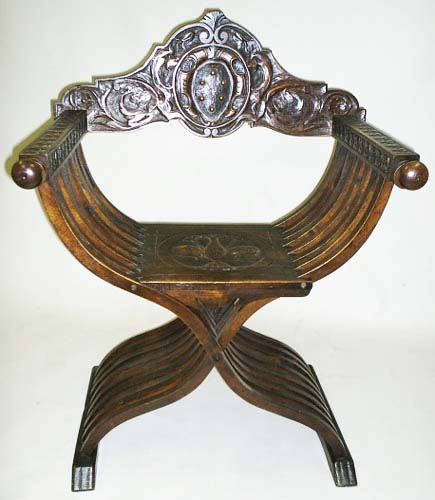 This chair is remarkable not only for the quality of its 19th century craftsmanship but also for the symbols incorporated in its design -- giving rise to two 21st century enigmas.

Historically called an "X" chair because of its curving frame, crossing at the central joint, this design is the original "folding chair." In the style's earliest incarnation, it was treasured by the military commanders of ancient Rome for being practical, comfortable and portable, since it could be strapped to the side of a pack animal on long campaigns to the far-flung edges of the empire. In Medieval and Renaissance times, particularly in Italy and southern France, it was made of walnut and updated for use in homes by adding a crest rail or back, for extra comfort, that could be removed when the chair was folded. Fabric could be draped over the chair and anchored using the rings on the arms.

Within the world of French antiques, this design is commonly known as a "Savonarola chair," after the Dominican cleric, Girolamo Savonarola, the éminence grise of the Florentine Republic until his execution in 1498. Although we cannot confirm it, we speculate that the association between Savonarola and French antique furniture stems from the occupation of Florence by the French army under King Charles VIII (known as "the Affable"), with whom Savonarola became allied in opposition to the Medici Family. Perhaps the French troops became so enamored of the "X" chairs they found in Florence, that they took some back to France and named them for their local hero. The Savonarola chair became a popular design in mid-sixteenth century France. This style of chair enjoyed a resurgence of popularity in France and Italy as part of the 19th century revival of Medieval and Renaissance styles. They remain in use today, including throughout the Monastery of San Marco where Savonarola was Prior, and one is included in the display of the cell where he lived.

This particular example was most likely crafted in Italy in the third quarter of the 19th century, or perhaps earlier. The chair does not fold, even though it is designed in the manner of the classic, folding "X" chair. It is made of a rich, dark walnut susceptible of the intricate carving found on the crest rail and the seat. Overall, the chair is wider than most Savonarola chairs, bestowing upon it a magisterial presence. The removable crest rail is wider, vertically, and more intricately carved than the backs of other Savonarola chairs we have encountered. In keeping with tradition, the reverse side of the crest rail is blank since the chair is designed to be set against a wall and to be admired from the front when not in use.

The central part of the crest rail is comprised of the coat-of-arms of the Medici Family. In its simplest form, the family crest consists of six balls on an escutcheon with a tapered border. As the family's power grew, the coat-of-arms became more elaborate, including the additions of fleur-de-lys symbolizing the royal family of France (Catherine and later Marie de' Medici were Queens of France), and of the Papal crown and keys (Pope Leo X). The oldest and most lasting element of the coat-of-arms is the arrangement of six balls of equal size (originally red on a gold field) in varying patterns. It is not clear what the balls are supposed to represent but speculation has included everything from pills (since "medici" comes from the Italian word for physician) to bisanti or small spheres used by merchants and bankers in confirming the value of coins based on their weight. Here the crest is in its simplest form of equally spaced balls in an oval pattern mirroring that of the escutcheon. Familiar with the crest from seeing it on buildings all over Florence and Rome, we purchased this chair with a burning desire to preserve it for future generations and to learn more about all the symbols carved into it.

Surrounding the coat-of-arms are various decorative shapes based on vegetation, but the crest is bordered on each side by a dolphin. Here is the first enigma associated with this chair. The dolphin was the symbol of the Pazzi family and incorporated into its coat of arms. There, two dolphins hauriant (swimming upwards) face outward, as opposed to inward in this instance. The family is best known for the Pazzi Conspiracy of 1478 involving a plot to murder members of the Medici Family. We prefer to remember them for the Pazzi Chapel, that embodiment of Renaissance perfection designed and built by Filippo Brunelleschi at the Church of Santa Croce. Why would the chair's designer incorporate elements of both families' crests in one piece of furniture - perhaps it symbolized a marriage or other alliance? Or the Pazzi's subsequent rehabilitation in Florence and importance in Tuscany as the Medicis declined?

That this chair is firmly entrenched in Florentine history is indisputable when the seat is considered. It is highly unusual for the seat of a Savonarola chair to be ornamented, but this one bears the symbol of the city of Florence - a fleur-de-lys. Unlike the fleur-de-lys used in French heraldry, the Florentine version contains a characteristic sprig on either side of the central foil. One might speculate that the chair was designed to cast a historic light on the Medicis and to use their coat-of-arms on the crest rail. To bring attention to Florence, the only other place on the chair susceptible of such a large carving would be the seat. That the bas relief carving is still so distinct, after more than a hundred years, is surprising and leads us to think that the chair has not been sat in much.

The second enigma goes to the heart of the chair itself. Why would a Medici coat-of-arms be displayed on a chair named after their sworn enemy, Savonarola, whom the Medicis succeeded in having burned at the stake? Or is the chair a symbolic triumph of the Medicis, who eventually returned to power in Florence and could turn to their own uses the chair named for their deceased adversary? In the extreme, is one sitting on or crushing the symbol of the Florentine Republic under Savonarola, while leaning on the Medicis, who returned the city to regional power under the oppressive rule of Grand Duke Cosimo? We speculate that the chair was designed more for symbolism than seating, as otherwise the Medici crest and the Florentine fleur-de-lys would be entirely obscured whenever someone sat in the chair.

The armrests of the chair are carved on three sides with a pattern that resembles leaves or perhaps palm fronds and was used commonly on the border of tables dating from the 16th century. Over time, the armrests have become less than completely parallel, but this does not affect their utility. The front of each armrest is a round ball rather than the lion's head seen commonly in French chairs in the Savonarola style. However, the traditional lions' feet are in evidence in the front part of the base of each side of the chair.

This chair is not only sturdy but comfortable owing to its proven design and its construction from solid walnut. Unlike some later, flimsier examples we have seen, this chair has eight ribs making up its "X" framework rather than six, and may help explain how it remains in such good condition after all these years.

While this chair can be sat in, its highest and best use is to display the magnificent carving of the crest rail and seat - visible when no one is in it. The chair would be ideal in a library or living room with other Renaissance style furniture.