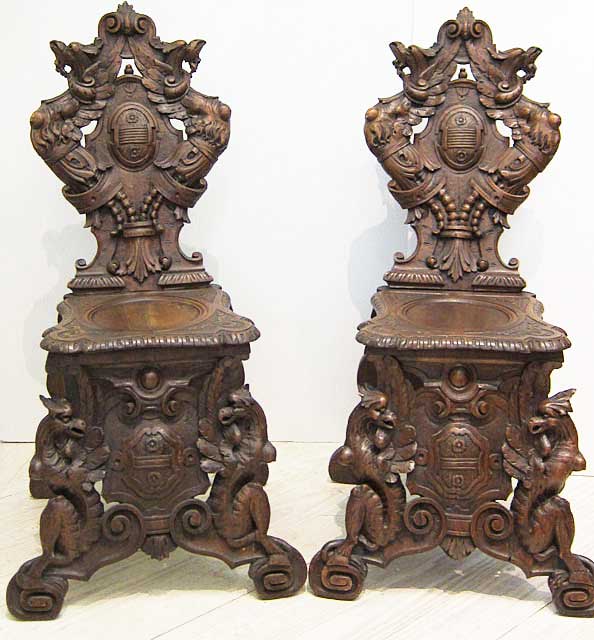 As we said in the description of another pair of remarkable chairs, Item 5222, we adore the sgabello style and have little ability to resist when it comes to buying them for our collection. Not meant to be sat upon (although ours can be), they are intended to be admired — especially in pairs — as examples of Renaissance furniture design at its most scrumptious.

However, when selecting sgabelli we have learned to be cautious and to select only examples that are solid and sturdy. Too often, they are falling apart or already in pieces! A primary indicator of excellence and longevity is the thickness of the wood, both for the back and the for the supports for the seat. In other words, a chair should be heavy even after much of the wood has been carved away in crafting the stunning artwork that covers it. If not, it was probably made more recently and for a purely decorative purpose. The sgabelli in our collection were intended to be works of art but also functional. When sitting in them, we are transported back to the Renaissance when the sgabello was first conceived as both a seat and a triumph of the carver's art.

The dominant ornamentation on these chairs, both top and bottom, is the chimère, a sort of catch-all term in French for a mythological creature with wings on a body that is a hybrid of two or more other creatures. Historians tell us that the origins of the chimère date back to Lycia, in Asia Minor, where the ancient Greeks believed it had the head of a goat on the body of a lion.

Over the centuries, the chimère turned up as a griffin, a winged figure with the head of an eagle or hawk and the body of a lion. Where the bird ended and the feline began was subject to a rich heritage of interpretation. A chimère might also be a hippogriff, a larger mythical creature with the head of an eagle and the body of a horse. The hippogriff appears to have been invented by the Italian poet Ludovico Arioso (1474-1533) in his epic entitled Orlando Furioso. More recently, it gained fame as a mode of airborne transport when Harry Potter rode Buckbeak, from the herd of hippogriffs at Hogwarts, in Harry Potter and The Prisoner of Azkaban (2004).

While chimère could be translated into English as a chimera, in the world of French furniture crafted during the Second Renaissance (approximately 1540 to 1600) the figure appeared in numerous forms derived from so-called grotesque decoration of ancient Rome. For more about Renaissance decorative elements, see stylistic origins

Chimères were especially loved by the influential architect and furniture designer Jacques Androuet du Cerceau (1510-1584) whose ideas dominated the Second Renaissance in France while he worked in Paris, the Loire Valley, and Fontainebleau. Generations of French furniture makers were inspired by his designs and his books of engravings, including for the mythological creatures he used as support elements for tables and cabinets.

This beautiful French table from the 1560s, on display at the Victoria and Albert Museum in London, has chimères whose graceful, arching bodies form the ends of the table and appear to support the top. 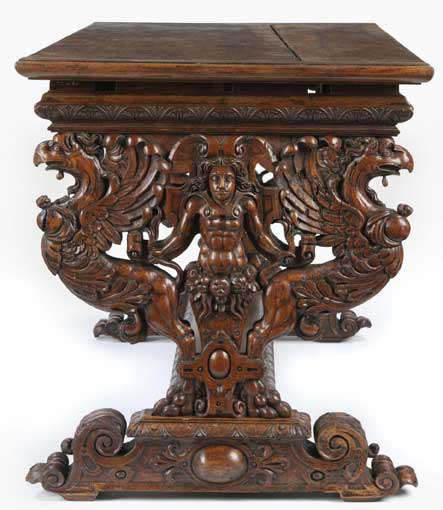 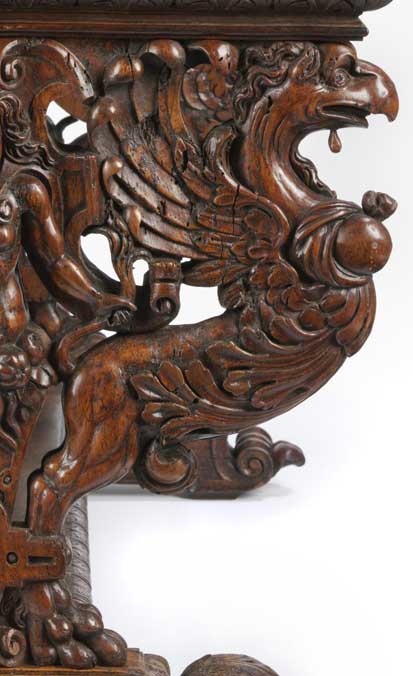 During the 16th century, there was an unprecedented interchange of artists and ideas between France and Italy, as documented in our description of Chest 5227. Italian craftsmen had workshops in Lyon and, along with their French counterparts, undertook commissions in the Loire Valley to provide innovative furnishings at the height of the building boom for chateaus. It is this spirit that our sgabelli evoke.

Viewing our sgabelli from the top down, the upper part of each chair is rich in decorative details made up mainly of the chimères whose backward arching bodies provide the overall framework for the backs. These are ornamented with other decorative elements typical of the period such as the scrolls, strapwork, and bands. They evoke Rosso Fiorentino and the stuccoes framing his frescoes in the Galerie François I at Fontainebleau Castle. The background is a delicate stippled pattern that provides contrast with the smooth texture of scrolls and strapwork elements. For more about this decorative vocabulary and the groundbreaking artist who conceived it, see the description of Scabello Bench 5220.

The chimères on the top part of the chairs are more elaborate than those of the bottom. Their wings are intricately carved and effusive as they form a sort of bridge between the top and middle parts of the backs of the chairs, encroaching onto and obscuring the underlying shape of the chairs. Intricately carved heads and beaks point upward and outward, as if held in place by the curled band around the neck. On the lower parts of their bodies, feathers are kept in place by bands and by strapwork designs. Their feet are not visible and so it is not possible to tell if they are those of a horse or a lion.

The uppermost part of the backs of the chairs is capped by a small acanthus leaf, pointing upward, between two large, elaborate scrolls.

The lower part of the back of the chairs has strings of pearl-like figures ending in a band above an inverted tip of an acanthus leaf between small scrolls.

The base of the chairs, like the top, has as its predominant elements the chimères that frame either side. They sit hunched on scrollwork that forms the base and front legs of the chair.

The chimères on either side of the base of the chair gaze across at each other. The upper parts of their bodies appear to face inward while the lower parts, based on legs of a goat in a crouched position, face outward. Such, apparently, are the contortionist capabilities of chimères. Their long wings stretch outward toward the center and upward to the seat, as if grasping and helping to support it.

As we often see with sgabelli, there are heraldic elements at the center of the upper back portions of the chairs. They are based on an oval with a rose figure at top and bottom and with seven horizontal bars at the center, all against a hammered background. We have not uncovered whether this represents a family's coat-of-arms or is merely an attractive decorative element.

A similar figure is found at the center part of the base of the chairs. However its frame is an escutcheon with a double outline. The central figure is three bars, of which the two outer ones are thinner than the one in the middle. It is unusual to have a heraldic element on the base of a sgabello where the central figure is typically a grotesque masque, as seen on Item 5220.

The seats of these sgabelli are trapezoidal in shape, curving gracefully as they widen toward the front. At the four corners are motifs involving acanthus leaves. The larger figures, at the front, include an unusual feature in the form of blooms extending beyond the acanthus leaves. In keeping with the traditional designs for sgabelli, there is an indented circle in the center of the seat and the background around it has a stippled pattern.

A small crack is visible on one of the seats, however it does not impact the integrity of the structure.

While the sgabello as a type of chair has its roots in northern Italy, they were also made in France, as we believe these chairs were in the 19th century. Interest in the haute époque (furniture from the Middle Ages through the mid 17th century) surged in France during the 19th century as a fashion called Henri II (after the king who ruled from 1547-1559). Books of designs for furniture and ornament from the 16th century, by Jacques Androuet du Cerceau, were rediscovered and reproduced for mass distribution in the 19th century using a new technique called heliogravure. Inspired by Androuet's designs, French craftsmen made pieces evoking the earlier time but updated and personalized — as with the coats-of-arms on these chairs — for contemporary patrons.

These chairs are ready for many more decades of being admired and treasured as the spirit of Renaissance Italy with a decidedly French accent. They are the ideal seating for reading about hippogriffs in Italian Renaissance poetry or viewing them in a Harry Potter film.

Ideally, these chairs would sit in an entryway on either side of a walnut table or chest. For example, Table 5181 has a similar chimère on each corner, just under the table top. Chest 5154 would also be attractive between these two chairs considering the exquisitely carved elements that are also directly traceable to Fontainebleau.