Missing the Crus on the Loire

Of all France’s wine regions we prefer the Loire Valley, in the country’s northwest quadrant, home to favorites including Sancerre (both red and white) and especially Chinon. But it is French history rather than a wine which beckons us on our annual visits to France. No other wine region can compete in terms of momentous events, such as regime-changes and sagas of royal intrigue, unfolding in magnificent Renaissance chateaus nestled amidst vineyards producing wines fit for a king.

It was monks who first planted grapevines in the central Loire Valley where France’s longest river makes a left turn near Gien and then flows westward for over 200 miles to reach the Atlantic Ocean at Saint-Nazaire in Brittany.

Things took off during the Hundred Years War (1337-1453) as local demand for wines increased dramatically. When English invaders spurred an exodus of France’s hereditary rulers from the capital at Paris, the seat of government shifted to the Loire Valley. Generations of kings and their courtiers took up residence there, ushering in an extended building boom of luxurious chateaus constructed from the region’s distinctive white tuffeau limestone.

Tourists flock to some 50 chateaus found in towns and in the countryside near the Loire and along the many tributaries including the Vienne, the Indre, and the Cher. While the French word château is translated as "castle," the versions in the Loire Valley look more like pastoral pleasure palaces than military fortresses. 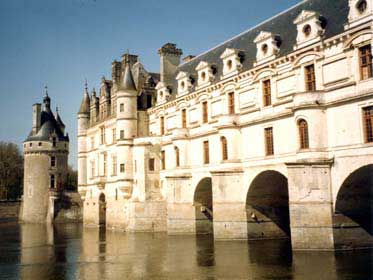 One of our favorite chateaus is the jewel of Renaissance design, Chenonceau, whose noteworthy history, including a contretemps between the queen and the mistress of King Henri II (reigned 1547-1559), did not end when the capital shifted back to Paris in the 16th century.

In the 20th century and in private hands, Chenonceau served as a hospital during World War I. When the Cher River functioned as the border between free and German-occupied France during World War II, the chateau’s enclosed bridge over the waterway was used to smuggle refugees. Five miles farther upstream at Montrichard, the Monmousseau winery aided the French Resistance by using delivery trucks to transport agents secreted in wine barrels past the German border guards along the Cher (as detailed on Episode 3 of the Wine Show).

Happily for the royals who erected chateaus along the Loire, delectable wines were on offer at their doorsteps to accompany the tasty meals of wild game which had made the area a favorite for hunting, the obsession of monarchs and their entourages but especially of King Henri II’s father, François I.

Born and raised at the chateau of Amboise, François I reigned from 1515 to 1547 and lived at other chateaus in the Loire Valley, such as Blois. He left his mark on the region by spending a massive chunk of French tax revenue building its largest chateau, Chambord, on reclaimed marshland in the midst of one of the country’s largest forests.

The design, including an ingenious double staircase and an exquisitely complex roofline, is said to have been influenced by Leonardo da Vinci (1452-1519). The artist’s job description was "Chief Painter, Engineer, and Architect to the King" while he lived out his final years as François’ neighbor in Amboise. There, the king kept him busy on a plan to divert the Loire River as part of the concept for a Renaissance "ideal city" and new French capital to be constructed at Romorantin. Leonardo did not live long enough to lay eyes on Chambord, but in a twist of fate his beloved Mona Lisa enjoyed a sojourn there when the Louvre Museum’s most precious works were evacuated from Paris in 1939.

Construction that began on Chambord in 1519 remained incomplete when King François I died in 1547. But not before his royal symbols, an "F" with a crown atop it and a salamander, were emblazoned throughout lest anyone forget who built it. The sheer enormity coupled with the superbly detailed exterior strike awe, as intended 500 years ago, into any visitor approaching the chateau from afar (as the remoteness of the parking lot requires). With the structure looming ahead, it appears to float weightlessly in regal isolation from encroachment by the woods that still border it. 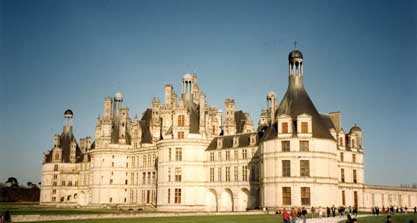 Unlike other chateaus in the valley, it was never destined to be home for extended periods. François spent no more than 50 nights there during his lifetime, doing what he loved best — hunting. Presumably the resulting game dishes were washed down with generous amounts of another of the monarch’s passions — wine.

According to the chateau’s official website, King François I arranged for a delivery from Burgundy of grapevines to be planted in what is now the appellation d’origine controlée of Cour-Cheverney, some ten miles from Chambord. The grape he chose, used to make white wine, was re-named Romorantin in honor of the unfinished project for the new capital of France envisioned by him and his Italian protégé.

At least one of these vineyards survived the phylloxera infestation that devastated the Loire Valley in the 19th century. In 2015, pre-phylloxera Romorantin and several other varieties of grapes (including Gamay and Pinot Noir) were planted on the grounds at Chambord, where an on-site winery is planned. Bottles of wine from this vineyard were unveiled at the chateau in May of 2019 marking a visit by French President Emmanuel Macron and Italian President Sergio Mattarella to celebrate the 500th anniversary of Chambord’s birth and Leonardo’s death.

During France’s Third Republic, Chambord was owned by the Duke of Bordeaux (1820-1883) who was also the Count of Chambord and the last eligible male in the royal line dating back to King Louis XV (1715-1774). It was at Chambord in 1871 that the Duke renounced all rights to inherit the French throne and to become King Henri V. This brought the curtain down on Chambord and the Loire Valley as the stage for centuries of kingly drama, except for a battle royal over wine which erupted two years ago. 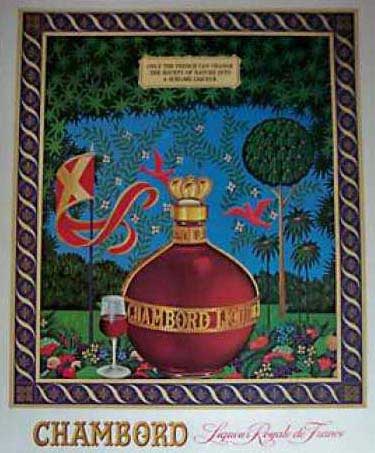 If you ask an American “what is Chambord?” the answer you may get is “a raspberry liqueur in a fancy orb-shaped bottle with a crown on top, famed for ads in glossy magazines at Christmas time.” Ask a French person and they’ll say “a chateau in the Loire Valley,” but have likely never tasted a Chambord-branded liqueur.

Legend has it that King Louis XIV (reigned 1643-1715) first sampled at Chambord an enchanting liqueur made from wild raspberries picked in the forests surrounding the chateau. We were astonished to learn, on our first visit to the chateau, that Chambord Liqueur was not for sale in the gift shop. Instead, the clerk directed our gaze to a high shelf where a dust-covered display with a miniature version of the orb-shaped bottle sat. She confessed that although the liqueur bore the chateau’s name, it was not known in France. While on vacation in New York she had picked up the tiny sample in order to have something to point out whenever Americans inevitably inquired about it.

This disparity between American and French notions of Chambord came to a head in 2018 when a trademark lawsuit was filed in France in conjunction with the launch of the wines, mentioned above, to be marketed as Clos de Chambord.

Brown-Forman, the Kentucky-based owner of brands such as Jack Daniels, had acquired Chambord liqueur royale de France for $255 million in cash in 2006 from its Philadelphia-based owner, Charles Jacquin et Cie. Inc. As owner of the right to use the Chambord name for its liqueur in France and the European Union, Brown-Forman argued that the chateau would create confusion by marketing wine using the Chambord name. The chateau countered by claiming that it was Brown-Forman who created confusion because the producer of the liqueur was not the 500 year-old chateau nor were the spirits made there. Even the website of a national beverage retailer perpetuates the mix-up when it states that Chambord is "produced on the grounds of a historic chateau" yet fails to mention which one. In fact, the liqueur is distilled at Château La Sistière in Cour-Cheverney.

The jury is still out on whether any wine made from the chateau’s vineyard will ever bear the Chambord name or become a cru of its own. Whatever the outcome, the chateau will remain a favorite destination for us in a valley filled with history and the wines that made so many moments memorable.

The original version of this article appeared in the Summer, 2020 edition of the Quarterly Newsletter of the Wine Society of Texas, a non-profit organization dedicated to wine education and appreciation.