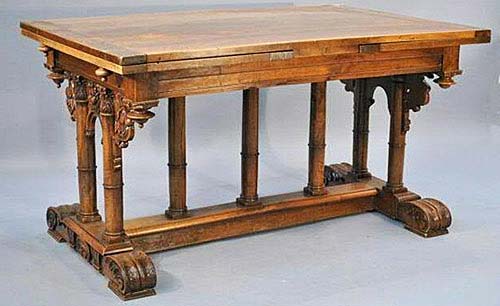 We purchased this table, along with a magnificent Renaissance desk (item 5182,) at an auction in northwestern France. Our suspicion is that they had once been part of a single collection because they evoke Italian Renaissance design and craftsmanship in a town and region not known for such objects.

Fast-forward to our most recent trip to Rome, and our heads are filled with Renaissance shapes and designs traceable to Nero’s Domus Aurea. Nero’s grand palace was supposed to take up a huge swathe of Rome after the fire of 64 A.D. but was only partially completed. It was later abandoned and eventually covered by other buildings, notably the baths built some forty years later by the Emperor Trajan.

While we have not found evidence that any library tables were recovered from the archaeological site at Domus Aurea, apparently Trajan was responsible for a library, in the forum named after him, that reportedly included small rectangular tables made of marble (known as a “cartibulum”). A table would have been central to an ancient Roman library because of the need for a horizontal surface on which to unfurl the papyrus rolls that predated books in these collections.

This same design was popularized in France and featured extensions allowing leaves below the table top to be drawn outward and then the main part of the table top to drop into the vacated space. While called “à l’Italienne,” the draw-leaf was invented in the Ile de France and some have attributed the design of this type of library table to Jacques Androuet du Cerceau (see the description of Item 75 from the second sale of the Perrier Collection, listed below). The design was also very popular in Lyon, where many were made in the area during the late 16th and early 17th centuries. The tiny roses in the center at the top of the two columns on each end are typical of Lyon workshops and lead us to think that this table reproduces a design from centuries past.

This table is faithful to the original Renaissance trestle design, right down to the extensions, as seen in two French tables made in the late 16th century (figures 213 and 214 of Madame Boccador’s work, referenced below). Just as with the older versions, our 19th century table is characterized by a light walnut color with a richness of grain that reinforces the notion that the wood itself is the focus and just a little ornamentation is necessary.

The French influence and desire for more elaborate ornamentation are reflected in the feet of this table, resembling large, scrolled feathers, a motif repeated again on either side of the “H” pieces at the ends of the trestle. What delights us in particular is the ornamentation on each side, just below the table’s top. The two columns are united by an arch atop which a cherubim or “angelot” is carved – an angel’s head with wings on either side. The sculptural detail is glorious, especially the exuberant head of tousled ringlets surrounded by the layers of feathers carved outward in intricate patterns.

On the other side of each column is a griffin, functioning as an elaborate corbel, whose head butts up against the top of the table and whose feathered torso tapers into legs that form a platform for attachment to the column. The magnificence of the carving at the ends of this table may not be the easiest to view, as they can be obscured somewhat by the top, but they command attention and reward careful study.

This table is not only a magnificent example of Renaissance design at its best, but also the focal point for attention wherever it is placed. Because of its small size it can be used as a desk, occasional table, console table behind a sofa or even as a coffee table. Due to the extensions, it would also be suitable as a small dining table for a kitchen alcove or other dining area.