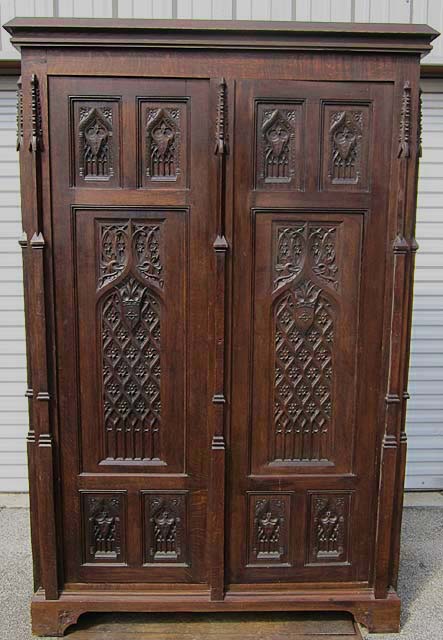 When we acquire an armoire such as this one, it is difficult to know where to start in describing all the aspects that delight and intrigue us. As the destruction and rebuilding of Notre Dame de Paris remain front-of-mind, we enjoy reveling in the utter "gothicness" of a piece of furniture in the style inspired by a renovation of this cathedral in the 19th century.

But first, we focus on how we came to acquire this piece and three others (5332B, 5332C, 5331) owing to an auction of the contents of the Château du Temple in the Loire Valley region of northern France. Unlike the historic chateaus built in the area during the 16th century, the Château du Temple dates to the 19th. Built by a French banker in 1886, the Château du Temple has changed hands over the years, including being owned for a time in the 1980s by the popular Greek singer Nana Mouskouri. It overlooks the town of L'Ile Bouchard, about 30 minutes from Chinon, home to one of our favorite red wines. 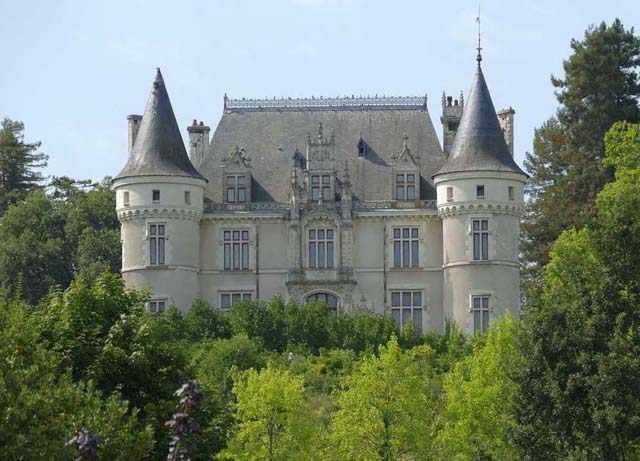 The outward design of the Château du Temple is in the “Troubadour Style," a sort of mash-up of Gothic and Renaissance elements. Popular in the late 19th century in France, this style dominated not only architecture but also painting, literature, and the decorative arts including furniture. For more about this style and others mentioned, below, see our page on Stylistic Origins.

When we discovered the chateau, it was being prepared for an auction on-site of the furnishings and fixtures at the same time as the house and surrounding land went up for sale. In the spirit of chivalry and Troubadour style, the auction included two knights in armor, crafted of zinc and almost ten feet tall, who previously stood guard at the chateau’s gate. 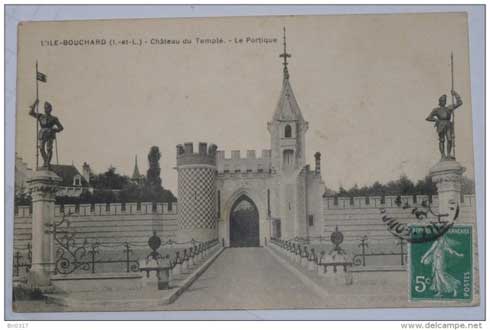 There were so many magnificent pieces on offer at a time when highest quality Neo-Gothic furniture has become increasingly scarce and so dealers from all over the world were converging on L'Ile Bouchard, poised to compete with us for the items we hoped to win and bring back to America. 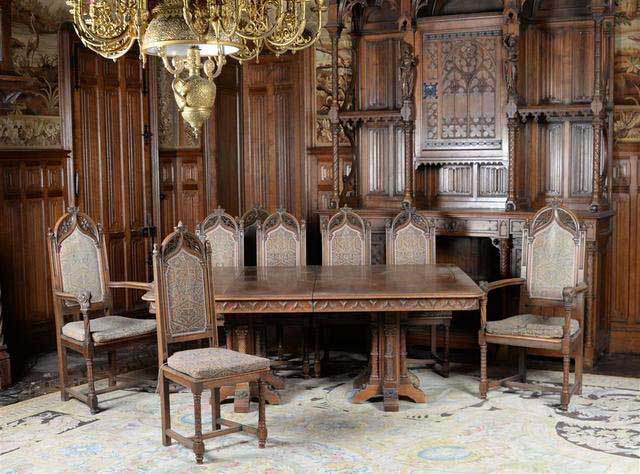 Photo of the Dining Room from the Auction Catalogue (with Tapestries, Gothic Furniture and Gilt Bronze Lighting Fixture)


We feel fortunate to have won the furnishings of a Gothic bedroom including this armoire. Made of solid oak in the late 19th century, it is a triumph of the carver's artistry in intricate details sculpted from this hardest of woods. Compared to other Gothic-style armoires in our collection, this one reflects a unique approach to fenestrage or tracery, as we'll attempt to describe in examining the piece more closely. But first, we propose that this is an armoire de mariage or a cabinet made to memorialize the coming together of two families, as reflected in heraldic symbols at the top and bottom of the doors. There is no way to know which is the bride's and which is the groom's, nor has our research revealed the names of the families.

Overall, each of the armoire's two doors is divided into three distinct areas, from top to bottom. At the top and bottom are areas taking up approximately one-quarter of the height. Each contains two identical window-like panels with coats-of-arms. In between these two areas is a central panel taking up approximately one-half of the height. It is devoted to elaborate fenestrage framed by an ogee or "S" shaped arch characteristic of the late or Flamboyant Gothic style named for the flame-like element at the top of the arch.

Anchoring the overall design firmly in the spirit of Gothic architecture are tall, spire-like pilasters on either side of the doors as well as one that separates the two doors. Each pilaster is topped by an elaborate finial that reminds us of Viollet-le-Duc's flèche that burned and collapsed with the roof of Notre Dame on April 15, 2019.

The heraldic panels on each door are framed within a wide arch atop columns acting like a gateway to invite the viewer to enter the world of the carving.

The columns are ornamented with a repeating rectangular design often seen on columns in Gothic-era buildings. The arch is ornamented with a repeating pattern resembling billowing drapery as one might witness in a church decorated for a wedding. The arch frames an elongated figure that encloses a trefoil (three-lobed element of tracery) resembling an inverted heart with a flower in the center. Just below it is a shield on which the armorial symbol of a stylized ermine tail is carved. Presumably, this symbol was part of the coat-of-arms of the family of the bride or groom. The heart and floral motifs reinforce the romance evoked by a cabinet made to grace the home of a newly-wed couple and house their most precious possessions throughout a long life together.

As described elsewhere on this website, the ermine tail is a symbol of Brittany dating back centuries, gaining prominence while Anne of Brittany was married to King Louis XII of France (whose symbol was the porc-épic or porcupine such as this one from their Château at Blois). At first glance, we thought that what appeared to be two cross-bars would indicate a cross of Lorraine. But because the edges are rounded and there is a slight curve at the base (called a fitchy), we researched further the possibility that we had a variation on the ermine tail and learned that it often appeared to have two (or more) out-croppings on each side. For more about the ermine tail and the history of Brittany, see Cabinet 3091. Supporting the central figure are two sets of lancet arches framed within two larger arches, enhancing the architectural feel of these heraldic panels.

The two panels on each door at the bottom mimic the panels at the top except for the heraldic symbol. Here, the ermine tail is replaced by three trefoils representing a stylized clover and using a fitchy-style element at the base. According to heraldry, this pointed element is meant to symbolize a stake or the insertion of the heraldic symbol in the ground whose ownership it symbolizes.

As mentioned earlier, the central panel of each door is comprised of an arch in the flamboyant style. At the bottom are pairs of lancet arches framed within other arches and mimicking the arches at the bottoms of the the heraldic panels. Above the arches are repeating diamond shapes containing soufflets or elongated quatrefoils with tiny floral figures in the center. Just below the intersection of the arms of the arch is another heraldic motif carved onto a shield. This time, it is a Celtic cross or a cross with a circle around the intersection of its members. This reinforces the notion that the cabinet is connected to Brittany since this region of France is one of the six original areas designated by historians as settled by the Celts. Filling in the space between the curves of the arch's arms and the shield are elliptical elements of tracery called mouchettes. The upper part of the central panel is unusual in the curving figures winding around and supporting pairs of soufflets with stylized flowers at their centers.

The sides of the armoire have four elaborately carved panels (two on the upper half and two on the lower), emphasizing the importance of this piece of furniture to whoever commissioned it and his or her erudition. Most 19th century armoires have little ornamentation on the sides — perhaps some square panels or a linen-fold design — as presumably no one would notice and so a costly "extra" could be avoided while attention was focused on the doors.

These four panels on each of the sides reflect a clever blending of decorative themes of the top and bottom heraldic panels with the central panels of the doors. Being of equal size, they divide the sides of the armoire in half both by length and width, being much narrower than the central panels of the doors. From those central panels, they take the motifs of the lancet arches and the diamond patterns framing soufflets. From the smaller heraldic panels they take the arch with the unusual decorative motif. The overall arch is in the ogee shape topped by a flame motif but bordered above by the slimmest of lancet arches.

As with the smaller heraldic panels on the doors, a an elongated figures is used to house a heraldic motif. This time it is a tree with a bushy crown, possibly meant to evoke a Celtic tree of life. We confess that trees have "stumped" us on occasion when researching their heraldic symbolism on other pieces in our collection such as Mirror 9227.

Underscoring the sophistication and richness of design characteristic of this armoire, the spires that framed the front of it, from top to bottom, are used to frame the side panels as well.

Overall, this armoire is in excellent condition reflecting the care and respect it has enjoyed over the decades since it was made and its intricate tracery was carved by unnamed yet gifted furniture makers passionate about the Gothic style.

This cabinet was once part of a bedroom including Bed 5332B but would do well in any room owing to its magnificent carving, including on the sides.