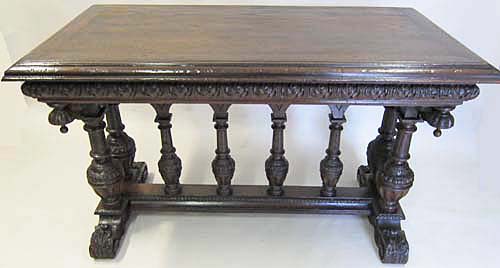 We can't seem to help ourselves when it comes to acquiring library tables in the Renaissance style. Each one we have had brings a new flurry of research and an unceasing affection for this ancient form that has proved a platform for boundless creativity in the hands of craftsmen dating back to the 16th century. For more about the history of the library table, see the following items: table 4176, table 9210, and table 9218.

This table has the classic "H" shaped stretcher from which columns rise to support the top. The columns on the outer members of the "H" are larger and more elaborate than the ones on the cross-member. However, they all incorporate an elaborately carved bowl-and-cup design for the base. The central columns are united by arches, above which a delicate floral design is carved even though it would be unlikely to be viewed.

In keeping with other Renaissance library tables, the sides of this table are particularly elaborate in their carving and the range of symbolism employed. The columns terminate in corbels carved to resemble palm fronds, a favorite decorative device in the Renaissance. Between the corbels is the figure of a woman's head with flowing hair. It is difficult to resist the urge to call her a Venus, with her flowing hair reminiscent of Sandro Botticelli's goddess seen sailing on her scallop shell toward land, in his famous Birth of Venus in the Uffizi Gallery in Florence.

On either side of the corbels are female figures, also with flowing hair, whose torsos taper into intricately carved dolphin tails and whose backs have sprouted wings amidst acanthus leaves. While similar to mermaids, the presence of the wings makes them melusines, mythical creatures of fresh water areas of France associated with the Celts, such as Brittany and Normandy. Conrad Kreutzer's opera, The Fair Melusine, based on a story by Franz Grillparzer, may well have been the inspiration for this table, especially after Felix Mendelssohn's own overture of the same name became a staple of the European orchestral repertoire. This may also explain why it appears that the female figures were carved and added later, perhaps in the early 20th century, to a table that dates from the mid-19th century.

Another unique aspect of this table is that instead of having a draw-leaf top, as a typical Renaissance library table would, this table has a drawer at each end. The drawers are only noticeable because of their pulls (replacements), set in the intricately carved frieze designed to look like small acanthus leaves.

The top of the table is massive and, owing to its age, displays some scratches. As the pictures illustrate, the oak has a magnificent patina and a rich grain, without the huge splits that often characterize older table tops that have warped or shrunk.

The base of the table has suffered some damage over the centuries, including from insects. Our tests have revealed that the holes resulting from insect damage are old and that there is no current infestation. It also appears that the feet have suffered the fate of too many antique tables - deterioration from having been swiped with a wet mop while the floors around them were being washed. What shines through is a magnificent paw design of the feet - tightly wound acanthus leaves topped by an intricately carved acanthus leaf. This is the typical design from a library table owing its origins to Renaissance Italy where the feet afforded an outlet for the carver's virtuosity and a whimsical take on what a table or a chest's foot could be. Bringing us firmly back to France are the fleur-de-lys at the center of the base on the outer sides of the table.

In addition to the female figures that we believe were added later, we doubt that the toupies were the original ones for this table. This is because they do not incorporate any of the design elements found elsewhere in the table and we would have expected them to be more similar to those on table 9210. Nevertheless, they enhance the overall look of the table and place it firmly in the firmament of library tables we have come to love.

This table would be ideal in any room of a house or office, in particular behind a sofa or, in its traditional location, at the center of a library or a wine cellar. Given the rich symbolism of female beauty, it could be an ideal gift for a special lady.