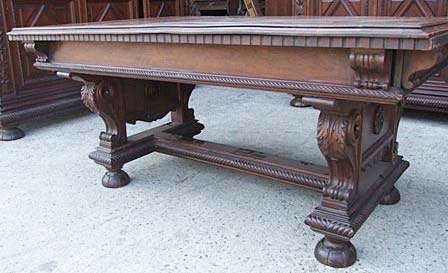 This Italian table is sturdy, solid, and timeless in construction and conception, harking back to the 19th century revival of interest in imperial Roman architecture and design at a time when modern Italy was uniting as a nation and asserting a greater authority within Europe, both politically and artistically. When we first laid eyes on this table, we were reminded of our visits to Rome, marveling at the staggeringly gigantic memorial to King Vittorio Emaneule II, the Altar of the Fatherland, atop its hill proclaiming the resurgence of Italy as a world power in the first half of the 20th century.

Symbolic of that new confidence is this table, incorporating architectural elements within the design of the Italian Renaissance based on an "H"-shaped stretcher and harking back to marble tables from Roman times such as one found in the archaeological site believed to be the Emperor Nero's Domus Aurea or golden house. In keeping with the design for library tables of the Renaissance, this table has carved, scroll-shaped verticals supporting the table top, incorporating intricately carved acanthus leaves and flowers. That these architectural flourishes are included on the sides facing inward, and less likely to be seen, is a testament to the sophistication of the designer and the funds lavished on creating this work of art.

Unlike French tables made around the same time, this table is typical of the Italian construction process in which the heavy top comes off, but when resting on the base is held there by the force of gravity rather than any fasteners.

The main horizontal elements of the table (below the top) are edged in a pattern of gadrooning or diagonal lozenges, but smaller and more finely carved than we typically see. Crowning it all is a massive top whose perimeter is defined by dentil moulding. The foregoing architectural elements plant this table firmly in a Neoclassical tradition that first radiated outward from Rome in the late 18th century only to captivate such French artists as Jacques-Louis David and Jean Auguste Dominique Ingres.

While incorporating the more feminine elements of Renaissance design harking back to Roman classicism such as the acanthus life, scroll, and flowers, these are used here with restraint and take a backseat to the more masculine gadrooning and dentil moulding whose rhythmic precision act as a unifying theme of balance and understated ornamentation. It all works wonderfully in a table that is pleasing to behold and adorned with a top whose magnificent grain and rich hue are the pinnacle of 19th century Italian artistry and craftsmanship.

Massive, masculine, authoritative, and defying its origins in an Italian dining room, we see this table's highest and best use as an executive desk or library table having pride of place in a home or a commercial setting.