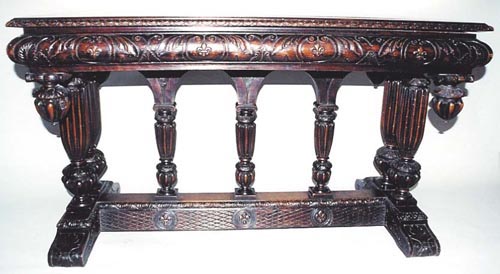 Despite over 20 years of viewing and acquiring French antique furniture, every once in a while one encounters a piece that takes the breath away, as this one did when we rounded a corner at a bustling antique fair in France and almost collided with this table. We recognized instantly that this ancient table epitomized our collection in its marriage of Renaissance Italian design with French carving in solid walnut. The result is a massive yet graceful library table of museum quality which rarely comes on the market.

The architectural nature of the table's structure owes its origins to Roman designs on a vast scale such as viaducts with their wide, rounded arches. On a smaller scale, heavily carved marble tables (cartibula) rediscovered in Renaissance times in ruins of ancient Roman homes, were more likely the inspiration for the Renaissance tables of Italy, and later, France

The overall trestle structure of French library tables has been attributed to Jacques Androuet du Cerceau (1510-1585) whose engravings of furniture designs inspired generations of French craftsmen to create oblong tables with "H" shaped stretchers, elaborate feet, and multiple pendentives or toupies. Such tables produced in the 16th and 17th centuries may still be viewed in the museums (e.g., Ecouen) and chateaux (e.g., Blois) of France.

This particular table hails most likely from northern France (anywhere from the Loire Valley to Flanders to Burgundy), undoubtedly predating the dealer's estimate of 1750 due to the quality of the walnut in terms of clarity of grain and richness of color. Indeed, during what is known in France as the Second Renaissance (beginning in 1545), such walnut was known as the "noble wood" and was used for pieces of commanding size (especially cabinets) defined by intricately carved elements elaborating columns and arches derived from the world of architecture.

Although the overall structure of this table is Italian in ancestry, the fleur-de-lis on the frieze below the top, on the sides of the central stretcher, and at the top of the trestle, are undeniably French. Were the table Italian, we would expect to see the stamen on either side of the central petal of the fleur-de-lis as shown in Florence. Those who commissioned and crafted this table were proud to graft a decidedly French identity onto an otherwise Italian design.

The origin of the fleur-de-lys as symbol of France is open to speculation but appears to have its origin in scepters of the Capetian kings. It was likely under the influence of Saint Bernard and Suger, Abbott of the royal Basilica of St. Dénis, that Louis VII adopted the flower as a symbol of French royalty.

On the lengthwise frieze below the top of this table, the vertical fleur-de-lis is encased in an elliptical flourish whereas on the narrower sides it is shown horizontally in back-to-back pairs, alternating with a stylized leaf. On the front and back of the central stretcher are fleur-de-lis in circles, resembling medallions or coins, below the base of each of the three columns. Visible only to those who bend down to look under the table are three fleur-de-lis incised on each side of the trestle where the arches intersect.

Other aspects of this design, which are unique to France, are the rounded shapes covered with gadrooning (reminding us of acorn squash) which are suspended from the four corners of the top and which form the base of all the columns. These are called either poignés, referring to the shape of a clenched fist, or pots à feu referring to a rounded cooking vessel with a top (and not to be confused with the beef stew known as pot-au-feu). This unique shape displaying the gadrooning is seen in furniture such as beds and dressoir cabinets from Burgundy but likely enjoyed a wider following among the nobility of northern France.

The feet, highly carved and tapering from the ends of the "H" shaped stretcher, have their roots in medieval design, the table à patins. The feet are intricately carved with a leaf design on top and sides, in harmony with the leaves carved into the narrow ends of the frieze. Perhaps this too is symbolic and comprises an element in the coat of arms of the family who commissioned the table.

Anchoring the table firmly in the tradition, if not the epoch, of the Italian Renaissance is its oblong design evoking the Golden Section, also known as the Divine Proportion. Buildings and objects created using the special ratios developed by the ancient Egyptians, later employed by the Greeks and Romans, and eventually "rediscovered" in the Italian Renaissance, were considered to have a powerful, almost mystical effect. In this case, the ratio of length to width of the table fits almost exactly the phi of the Golden Section (1.6180). Perhaps this is yet another reason for our profound attraction to this table.

The table's condition is, overall, excellent for a piece of its age and artistry but the top has developed several splits, which is not uncommon in modern interior spaces with carefully monitored heat and humidity. We have not repaired it and would leave this to the judgment of the buyer, but we caution that such a repair could jeopardize the table's value as an antique.

This table's traditional role is in a library but it would function beautifully in any room where, displayed prominently, its artistry will triumph. An extremely rare and undeniably exquisite collector's item, this table will delight its future owners as it has ourselves since the moment we first laid eyes on it.