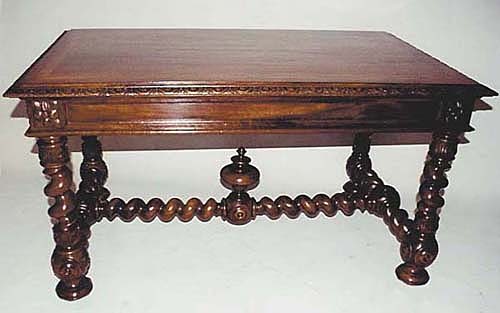 In a classic table-bureau design, the main structural elements of this unusually large antique desk reflect the Louis XIII style, characterized by graceful torsades or spiral turnings and a toupie ornament rising from the center of the “H” stretcher. Entirely hand-carved from solid French walnut, particularly distinctive are the rounded joints supporting the verticals and the toupie ornament punctuated at the four corners by fleurons or stylized blossoms. The top is bordered by a frieze in a palmette pattern.

Based on a late 16th century design, this 19th century desk has two drawers (not visible in the photograph) with original, highly ornamental drawer pulls. A larger, more heavily carved version of this same design was used by the author, Victor Hugo, at his home, Hauteville House, on the island of Guernsey during his exile from France. Photographs of the interior of the Hauteville House show how well such a Louis XIII style piece blends with Medieval and Renaissance styles. For other Louis XIII style pieces featuring torsades, see confiturier 1036, small cabinet 9230, and table 9310.

Although larger than the typical table-bureau of the 17th century, the size of this table allows it to serve a number of functions in an office, library, kitchen or any room where an ample horizontal surface and two drawers are desirable.