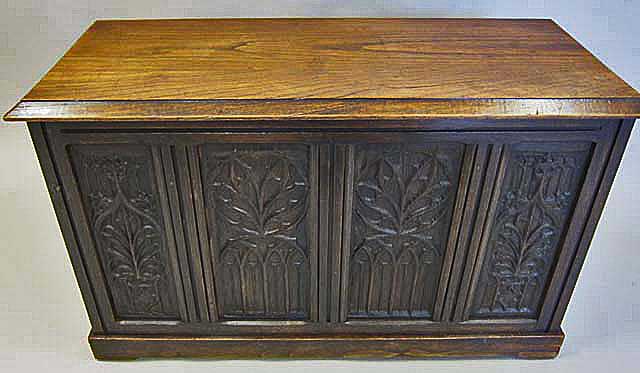 Ever since our first visit to the Louvre Museum, we have loved chests from the Middle Ages in the so-called Flamboyant Gothic Style. We return there often to marvel, not only at the genius of the artists who made them but also that these masterpieces have been preserved for over 500 years.

The following two photos were taken on a visit during one of the “yellow vest” protests. Public transport was halted and the streets surrounding the Louvre were blocked off from vehicles. Arriving on foot, we enjoyed the rare treat of a museum devoid of visitors. We had the furniture collections entirely to ourselves, to revel in the beauty of the rare and heavily-carved pieces from the Middle Ages and Renaissance.

With their elaborate fenestrage or tracery and magnificent carving, the chests in the Louvre’s collection celebrate and faithfully replicate the intricate patterns in stone of the cathedrals that were popping up all over northeastern France from the 13th century onward.

The fronts or facades of these Flamboyant Gothic chests were so magnificent that sometimes they were separated from the chests themselves and hung on walls to be admired as works of sculpture.

What makes the style flamboyant, as coined in the late 15th century, is the use of the ogee (ogive) or S-shaped arch whose gracefully curved top ends in a point. This point can take many shapes, including a fleur-de-lys, but the resemblance to the flame of a candle led to use of the term flambe, an Old French word for “flame.”

With the most intricate of carving and tracery, the flamboyant took Gothic design to the end of the line, making France susceptible to a new vocabulary of style based on that of ancient Rome. Sweeping northward across the Alps with the return of King Francis I from Italy, the Renaissance style took hold with artists such as Rosso Fiorentino installed at Fontainebleau and influencing French furniture designers for centuries to come.

The typical chest in Flamboyant Gothic style is comprised of panels of tracery across the front, anywhere from four to six, depending on the width of the chest. Each panel can be a different variation on the theme of tracery design (as in the first photo, above, from the Louvre) or those on one side can match those on the other, as in the case of our chest.

A smaller panel, usually with a family’s coat-of-arms, would be found in the center below the elaborate lock necessary to fulfill the chest’s function of protecting valuables. By the 19th century, the purpose of these Gothic style chests was decorative, rather than protective, and so no central panel or lock is found on our chest.

When we say “panel” we mean each completed thought as a design separable from others even though in the 15th century all the panels were carved from one piece of wood used as the front facade of a chest. By the 19th century, as in our chest, each panel was carved as a separate piece of wood and slotted into a framework comprising the front facade.

As in the architecture of Gothic cathedrals, the lower part of the central panels is populated by slender lancet arches atop which other elements are placed including, in the case of the two central panels of this chest, a circle imitating a rose window of a cathedral.

The matching panels on the outer sides of the chest are based on an elaborate fleur-de-lys design often found on Flamboyant Gothic chests. The lily flower is tall with multiple petals on each side draping gracefully downward until they morph into mouchettes (elliptical shapes).

We had the privilege of admiring (and touching!) two such fleur-de-lys panels of a 15th century oak chest in the preview for the sale of items from Bruno Perrier’s collection of haute époque (Gothic and Renaissance) furniture at the Drouot auction house in Paris on April 6, 1992. 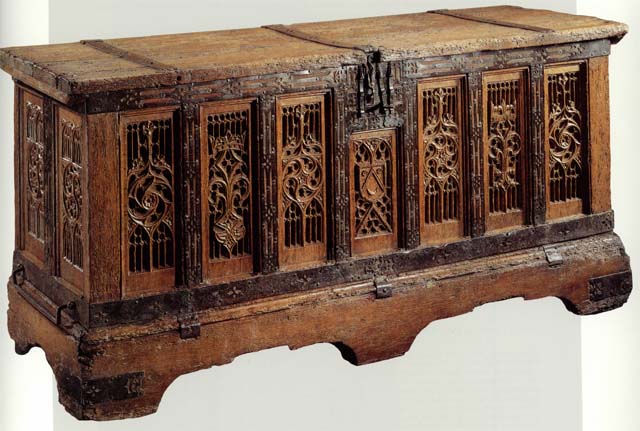 We find the 19th century versions of these chests to be like portable mementos of Gothic cathedral architecture gracing our collection of antique furniture. With a nod to the renewed interest in monuments such as Notre Dame de Paris in the latter half of the 19th century, furniture-makers reflected the enthusiasm of the citizenry for projects undertaken by Eugène Viollet-le-Duc to preserve the Paris cathedral and made chests such as this one celebrating Gothic style.

While the chests from the 15th century were large, sometimes as much as five feet wide in order to store vast amounts of linens and elaborate clothing, this chest is smaller, more compact, and better suited to modern uses while still capturing the essence of what it means to be Gothic.

Gothic chests with flamboyant-style tracery work well in any room but especially in an entryway with a Gothic caquetoires such as item 5188 or item 4118. Because of the smaller size of this chest, it could also work as an end table or occasional table.