A Honey of a Duck after the Hunt at Fontainebleau

In January, on one of those dark, damp, drizzly mornings that northern European winters offer in abundance, we ventured to Fontainebleau Castle, a rustic hunting lodge transformed over the course of several centuries into a sumptuous palace some forty miles south of Paris. As our train neared its destination, chugging through miles and miles of dense and formerly royal forest, we caught glimpses of modern hunters in florescent orange jackets with rifles at the ready but a far cry from the pageantry of the hunts that put Fontainebleau on the map. 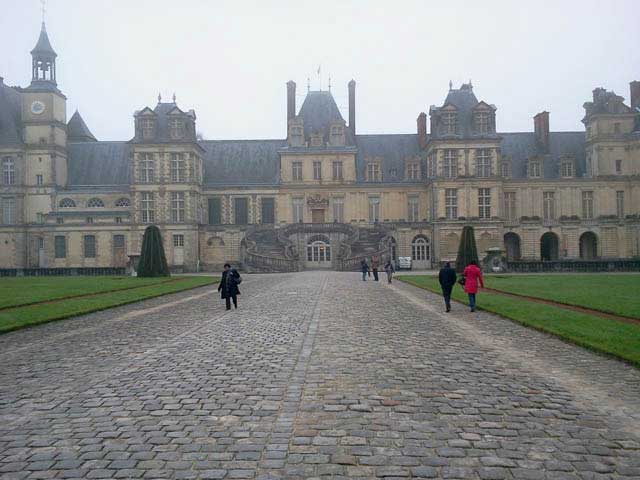 Our quarry? A tiny evanescent figure of a man, in a fresco no larger than a placemat, apparently eliminated or obscured in a recent restoration sparking an art historian’s quest to document it and our visit to the chateau to photograph it. Depicting the wing of the castle added during the reign of King Francis I (1494-1547), the fresco was painted by Rosso Fiorentino (1494-1540), the red-headed master from Renaissance Florence, whose greatest accomplishment was the design and execution of the Gallery Francis I to the delight of his royal patron and of art lovers down the centuries.

The diminutive fresco, below a larger one depicting Venus, was part of the transformation of a long narrow room, more like a wide corridor with windows, into an opulent gallery designed by Rosso to house over a dozen of his paintings glorifying Roman mythology and history, including a depiction of King Francis as Caesar. Rosso also designed the elaborate stucco figures surrounding the paintings and containing elements of ancient architecture, mythological creatures, decorative motifs such as bunches of flowers and grotesque masks, highlighted by gleaming gold leaf and mosaic tiles. Every inch of walls and ceiling was decorated, including magnificent wood paneling bearing in gold the letter “F” for Francis along with his royal emblem, the salamander, so there was no doubt in visitors’ minds as to the power and erudition of this king. Copied in books of etchings, prints, and engravings that circulated throughout Europe for centuries, these works established the School of Fontainebleau and themes embodied in furniture, ceramics, tapestries, and architecture well into the 19th century.

As kings go, Francis I was a fascinating character combining monarch and warrior as he sought to protect France from encirclement by the expanding Habsburg Empire after his arch rival, King Charles V of Spain, was elected Holy Roman Emperor. Drawn to the Renaissance art of Italy experienced firsthand on his military campaigns and when captured during the Battle of Pavia, King Francis gathered around him some of the finest artists and craftsmen the Apennine Peninsula had ever produced. He even convinced the aging Leonardo da Vinci to trek across the Alps (with his beloved Mona Lisa in tow), to reside in a house connected to the royal castle at Amboise by a secret tunnel used by the monarch to visit the legendary artist, whom he referred to affectionately as mon père or “my father.”

King Francis’ enthusiasm for Italy did not encompass wine, where his tastes were decidedly homegrown. His favorite was the dark purplish Malbec, the black wine of Cahors so prized by royalty on both sides of the Channel and first featured at the wedding banquet of England’s King Henry II to Eleanor of Aquitaine in 1152. To ensure a ready supply when he was resident at Fontainebleau, King Francis ordered a vineyard of Malbec grapes planted on the castle grounds.

Lavish banquets thrown by King Francis both preceded and followed the hunting forays that were the center of life at Fontainebleau. In the pre-hunt festivities, scat from a pre-selected stag would be presented on platters lined with leaves to demonstrate the worthiness of the quarry and give the dogs a sample of the scent. The privileged would then set off on horseback, preceded by the hounds and their handlers, until the stag was cornered and slain with lances. Similar rituals accompanied the hunt for wild boar, a more ferocious adversary, as well as large waterfowl such as swans and herons to be served with duck as a first course at lavish post-hunt banquets featuring musical pageants and dancing. Such celebrations at the court of King Francis I became the subject of Victor Hugo’s play, Le Roi S’Amuse (the King Enjoys Himself), which French censors shuttered after one performance. It became the basis for Giuseppe Verdi’s opera cataloguing royal excess but transplanted back to Italy as the Duke of Mantua in Rigoletto.

Because the needs of the over 500 troops, courtiers, and servants comprising the court at Fontainebleau quickly overcame the sanitation infrastructure, the entourage was constantly on the move among King Francis’ various hunting venues throughout France. Such a transfer could involve 18,000 horses bearing furniture, chests of decorative items, tapestries, barrels of wine, armaments, and other provisions. The tapestries he took along included those created in a workshop he installed at Fontainebleau to make copies of Rosso’s masterpieces from the Gallery Francis I.

Symbolic of the high regard in which he held Rosso’s work, the tapestries accompanied the king wherever he went to remind him of his beloved home at Fontainebleau and to acquaint his far-flung subjects with his supreme accomplishment there. Six of the tapestries eventually found their way into Habsburg hands thanks to the marriage of Francis’ grandson, Charles IX, to Elizabeth of Austria.

Although we never did detect the tiny figure in Rosso’s fresco, we enjoyed hours of wandering the castle and admiring the masterpieces of each succeeding generation of artists who called Fontainebleau home. What started life as a simple refuge for hunting deer amidst the forest remains a showcase on which the dynasties of France left their mark. We love that the Canadian telenovela, Reign (on the CW Network) evokes this style in telling a fictionalized story of Francis II (1544-1560), who was born at Fontainebleau, and his consort, Mary Queen of Scots. Royals engage in dangerous liaisons amidst luxurious costumes and sets, including some of our antique furniture. The series has run far longer than Francis II’s brief seventeen months on the throne, before he succumbed at age 16 to complications of an ear infection.

By the time we exited the castle, it was 4 o’clock and twilight was already enveloping the grounds. Famished after having skipped lunch, we looked around for a place to eat on the street facing the main gate. The fancy restaurants were already closed after the lunch rush with staffs taking a break before the dinner onslaught at 8 pm. Our only hope was an eatery on the corner, by the bus stop, where the lights were burning brightly. Peering inside, we spied a pastry case (always a good sign for my husband, Michael), a bar, and lots of people. A glance at the menu revealed confit de canard, sauce de miel, gratin dauphinoise or a leg-thigh of duck preserved in duck fat and pan fried, topped with a honey sauce, accompanied by a classic potato side dish. But could we have it at 4 pm, a time when no self-respecting French person would eat a meal? Thankfully the response was “yes” and we tucked in for a delicious dining experience.

The duck skin was crispy and luscious, the meat fork-tender and flavorful in a fragrant sauce combining pan drippings with a hint of sweetness from the honey. Much as I loved the duck, I had to admit that the side dish was the triumph of the meal. Thin layers of potato alternated with gruyere cheese in a creamy sauce spiced with nutmeg. Sadly, no Malbec was on offer and the wine, available only by the glass, was an unremarkable Brouilly. But nothing could diminish our enjoyment of the duck and potatoes that proved the perfect restorative for weary travelers on a cold winter’s day and a reminder that a delicious meal may be had where you least expect it. If such fare had fueled Rosso Fiorentino and his team of assistants, it is no wonder that the Gallery Francis I remains an artistic triumph attracting visitors from around the world on the hunt for Renaissance treasures.

Next time, back to school at Oxford to learn more about Morse Code.

The original version of this article appeared in the Winter, 2015 edition of the Quarterly Newsletter of the Wine Society of Texas, a non-profit organization dedicated to wine education and appreciation.