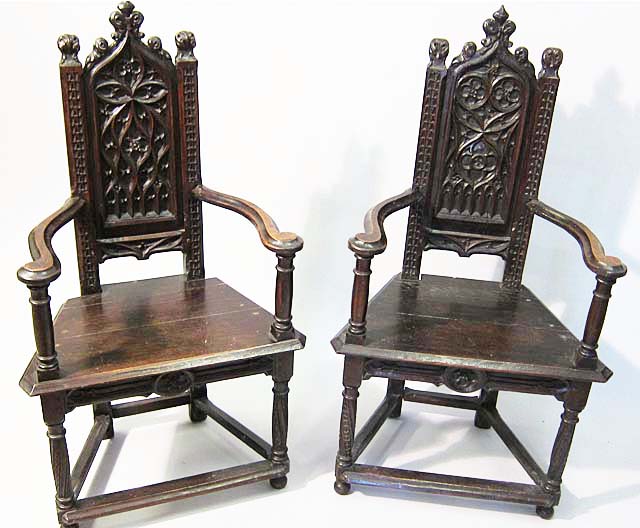 These two matching armchairs are fine examples of the 19th century revival in France of interest in designs of the Middle Ages. The armchairs are classic caquetoires – trapezoidal-shaped seat echoed below in the stretcher. This shape, also referred to ‘as in the manner of Tallemouze,’ is another charming example of design evoking food: the talmouse was a triangular puff pastry dating from medieval times but now recognized as the ancestor of the cheesecake.

The origin of the term caquetoire, however, is a bit sexist to the modern observer. According to the Rijksmuseum in Amsterdam, the caquetoire was developed as a conversation chair for women (the French verb caqueter means “to chat”). The broad, trapezoidal seat accommodated wide dresses worn by ladies of the 16th century who otherwise had been relegated to stools or window seats (except in the case of aristocracy and royalty) while their male counterparts sat on chairs.

Other features of the armchairs harking back to earlier times include the narrow back out of which curving arms attach to posts in the shape of columns extending vertically from the seat.

Characteristic Gothic flavor is found in the hand-carved tracery or fenestrage design of the backs. In keeping with the medieval belief that only God can make a perfect copy, the two backs are very different but each incorporates standard elements of tracery such as slim lancet arches, elliptical soufflets, and quatrefoils.

The tops are particularly interesting with the carved crocketing (stylized acanthus leaves) along the central arch to the middle, from which a small toupie arises. Being oak, the carving is less refined and more rugged than walnut but this works well with the very dark coloration and sense of durability these chairs impart.

As with all the chairs we offer, these are sturdy and ready for at least another century of sitting and chatting.

These chairs are ideal for a dining area around a small table or as occasional chairs in any room to comfortably seat members of either sex, despite their 16th century disposition in favor of ladies.