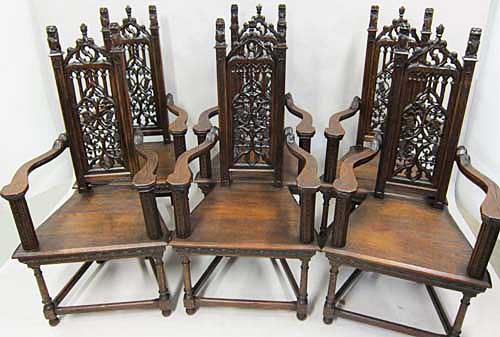 These are among the most beautiful chairs we have ever seen in the caquetoire design, owing to the open fenestrage or tracery of the six matching backs. In overall design, the caquetoire has its roots in the chattering classes of French history when women separated from the menfolk after a dinner and were expected to amuse themselves with conversation and games. The onomatopoetic French verb caqueter means to gossip or chatter and is the origin of the name for this style of chair. The caquetoire, with its trapezoid-shaped seat and sturdy arms, was the platform from which animated conversations could be launched.

The tops of these chairs are rich in ornamentation, including a decorative arch with crocketing encompassing a circle with two opposing and tapered shapes within. Crowning the arch is a carved flame, symbol of the late Gothic style known as flamboyant from the Middle French term for flame. This is in contrast to an over-the-top style or behavior characterizing today's use of the term.

The central panel of the back of each chair is tall, narrow and rectangular, typical of the caquetoire design. But unlike all the other caquetoires we have offered, the tracery is very elaborate and "open," i.e., the background is completely carved away. It is also unusual in how lancet arches are deployed. Tall and slender shapes, named for the diminutive of the medieval weapon called the lance, the arch ends with a point at the top and nips in on either side just below that top. The back panel is framed by such arches carved into the entire length of the panel.

Typically lancet arches are arrayed in groups at the base of a design such as a window in a Gothic cathedral or the front panel of a chest. Other figures would sit above it, such as quatrefoils, mouchettes and soufflets creating patterns of interlocking figures typical of Gothic tracery. Here, however, the elaborate tracery is below. The lancet arches sit atop a broad arch stretching from one side of the panel to the other and repeated near the bottom of the panel. Between these two arches is an intricate design of interlocking vines, leaves, and bunches of grapes. It is tempting to speculate that these chairs were created for the owner of a winery. Perhaps they were used in a salon in the city to remind the owner of an ancestral home in the countryside where grapes were grown.

Another remarkable feature not found on the typical caquetoire is the carving near the point where each curved armrest emerges from the back panel. There are two small humps arising from the arm and carved to mimic leaves partially unfurled. In some ways they resemble the crocketing used on Gothic spires to represent curled acanthus leaves but we can't be certain of their purpose in this instance other than to add ornamentation to an otherwise austere member. While the arms are not otherwise adorned, the column supporting each one is covered in interlacing patterns seen on columns in Gothic architecture.

The base of the chair is typical of caquetoires, employing a stretcher that is trapezoidal and mirrors the shape of the seat. In style it is basic, spurring a viewer to return his or her attention to the upper part of the chair and to focus on the intricate carving of the back panel.

In France, things come in groupings of six and twelve rather than four and eight as in the U.S. Whether dining room furniture, place settings, or wine glasses, six is the starting point for the French with twelve being the magic number for wedding gifts. These chairs came to us as a set of six and are offered for sale as such. They are a remarkable find and in excellent condition, in a world where ensembles of this beauty and quality rarely are found intact.

Despite their historical association with the distaff, these chairs in a modern setting are ideal for seating both men and women around a dining table or in a living room around an occasional table evoking the 19th century Parisian salon. Given the vines, leaves, and bunches of grapes carved so intricately in the back panels, these chairs would be ideal for a wine cellar or tasting room including armoire 5205.