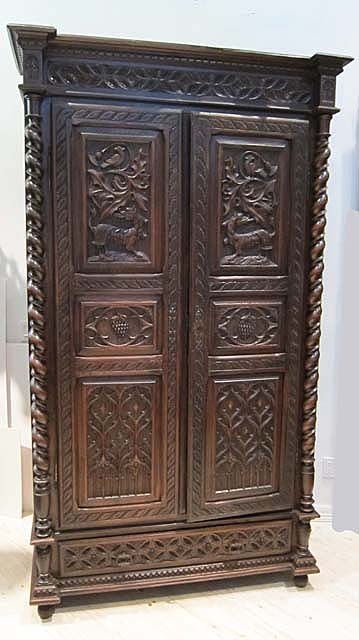 Part of the enchantment of being antique dealers is decrypting the riddles and enigmas built into the pieces we offer. These would have been readily understood by the original owners of centuries past. Indeed they may have commissioned an item with symbolism in mind, especially the heraldic elements. For modern viewers, cracking the code can be more daunting -- but worth the effort for years of enjoyment and with an intriguing story to tell.

In the case of this armoire, we were originally attracted to it by the beautifully carved bunches of grapes on the center panel of each door. They reminded us of many a wine adventure in France and so we figured the piece would be ideal for someone's wine cellar or kitchen. But there was more to the iconography than grapes and so the detective work commenced.

The four-legged creature on the upper panels of the doors fascinated us.

Maybe a dog? But it had a mane more like a horse and seemed to be wearing some type of armor on its hindquarters. Its claw feet looked more like a lion's. Out of its mouth, in a pose evoking a fire-breathing dragon, came vegetation in the form of a grapevine expanding with huge leaves swirling above it and a perch for a large bird. The quadruped seemed familiar but we just couldn't place it. Then we thought of the fire-breathing, six-legged dog with its head tilted backward, as seen on Agip gas stations around Italy. So close!

Our conclusion, considering all these elements, is that the figure is a chimera, a sort of catch-all fantasy animal first depicted in ancient Greece and re-interpreted throughout the ages including in the 13th century catalog of creatures or Bestiary by Pierre of Beauvais. While a chimera has varying characteristics depending on artistic traditions in an area, that it is related to a lion and a dog have remained fairly constant while the goat's head emerging from its back and the addition of wings are less common (and are absent here). The substitution of the grapevine for flames coming from its mouth is especially inventive.

We surmise that the creatures on this armoire were born of the fantastic imagination of the piece's designer who either was based in Lorraine (not far from Beauvais in Picardy and Pierre's bestiary) or worked for someone with roots in the region. This is because of the birds depicted above the chimeras. They are alerions, a mythological version of an eagle, used in the coat of arms of Lorraine because their name is a partial anagram of Lorraine. Here, the birds are perched on a branch of the grapevine that has split. The upper portion curves around the top of the alerion terminating in a thistle, another heraldic element from the coat-of-arms of Lorraine.

The panels with the bird, the thistle, the quadruped at the bottom, and swirling leaves in between reminded us of Armoire 4194 that we had sold several years ago. It was covered with fascinating creatures and intricate Gothic tracery but the similarity is uncanny in the composition of these two panels.

On a recent visit to the Louvre Museum, we were stopped in our tracks by the following chest and in particular the second panel from the right with similar imagery of a bird, thistle, and a quadruped amidst a design of swirling leaves. The bird might be an alerion. The quadruped, however, is quite distinct from the one on our armoire. It is more mythological in design with the addition of wings. However, like the one on both of our cabinets, the leaves appear to come on stems emerging from the animal's mouth, moving upward for the bird to alight upon. The last panel on the right of the chest at the Louvre is dominated by grape vines and bunches of grapes. Is all this merely a coincidence, or was the designer of our armoire inspired by what he saw in a 15th century masterpiece? 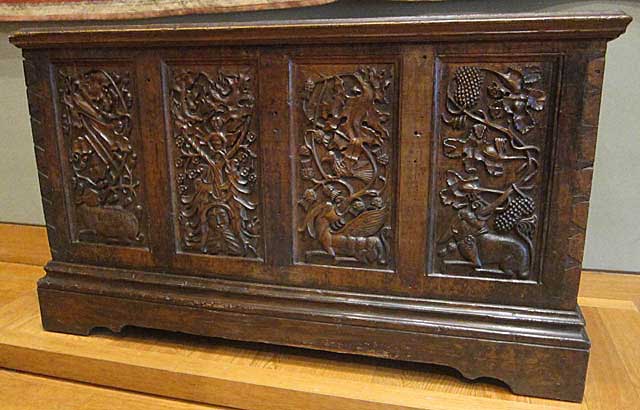 Panel with bird and thistle

The wine connection to Lorraine, through the alerion, is intriguing. Although not one of the celebrated regions in the French pantheon of grape-growing, the Moselle River flows from the Lorraine region of France through Luxembourg and into Germany where the more famous vineyards are located. Various designations exist for wines from the region in France, predominantly white wines, as are their German cousins including from the time after the Franco-Prussian War when Lorraine and Alsace were part of Germany. Indeed, it is likely that this armoire was built during the time the province belonged to Germany but the inhabitants still considered themselves French and adhered to traditional French designs. After World War I, Alsace and Lorraine returned to France.

The lower panels of the doors are comprised of traditional fenestrage or tracery design based on Gothic architecture. Elliptical shapes intertwine above a base of slim lancet arches. Circular tracery is the theme in the panels at the center of the doors, framing and tapering away horizontally from the intricately carved bunches of grapes.

An unusual design is found in the decoration for the framing of each of the panels on the doors. Small leaves with serrated edges are repeated, at the same angle, on the vertical and horizontal borders of the door. Typically, these framing elements would be unornamented. That these are adorned speak to the likelihood that the armoire was designed as a special commission with no decorative detail or expensive embellishment spared.

More tracery abounds in friezes spanning the top and bottom of the armoire. Both involve a flower in the middle of repeating patterns but the design at the top of the armoire is more elaborate.

Like book-ends on either side of the frieze at the top are corner blocks containing lancet arches with two interior arches.

The frieze at the bottom doubles as a facade for a drawer running the entire width of the armoire, with two bronze pulls.

At the top of the armoire is a row of dentil moulding as a final architectural flourish. From the photo, below, it is evident that a crack has developed but we cannot tell what caused the damage. It does not affect the structural integrity of the armoire, which is in very good condition. Typically this area would be in shadow and so the crack is barely visible.

Balancing the dentil moulding is a more geometric border in a zig-zag pattern along the bottom of the armoire, just below the drawer. The design evokes the serrated leaves in the frames of the door panels, as if giant pinking shears have sculpted them.

Bringing grace and symmetry to the overall design are the columns on either side of the front, in the spiral shape of torsades or barley twists. While we consider the torsade to be typical of Louis XIII style furniture, especially when used for table legs and the bases of chairs, we would classify this armoire as Gothic in style rather than Louis XIII. These torsades are complementary and pleasing, perhaps symbolic of the infinite spiral that is agriculture in its seasonality, including the growing of grapes and the enjoyment of wine.

As mentioned above, this armoire would be ideal for a wine room or cellar where its fascinating design could be the subject of admiration and delight while enjoying a glass or two of wine. It comes apart for moving and so could journey into a wine cellar.