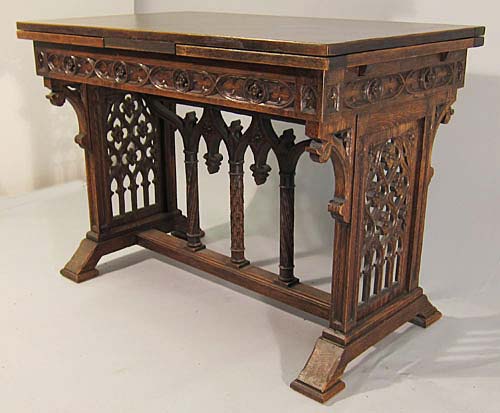 We find it hard to resist Gothic tables. The tracery and intricate carving that first attracted us to French Neo-Gothic furniture a quarter century ago still fascinate.

This table is no exception, especially with the added bonus of combining the small size of a library table with a draw-leaf mechanism to expand its length. Nevertheless, it reminds us in style but not scale of the first Gothic dining table we ever acquired and still admire for the richness of detail and the beauty of the oak.

Harking back to the design of walnut library tables from the Renaissance and their direct connection to marble tables found in the 15th century within the ruins of Nero's Domus Aurea in Rome, the dimensions evoke the Golden Section or Golden Ratio. In a nutshell, length is equal to 1.61813 the width based on formulas determined by the ancient Greeks and rediscovered the Romans and then by Renaissance artists looking to recreate the perfection of ancient design.

The library table design based on the Golden Section was popular throughout the Renaissance when the draw-leaf top was often part of the construction. Revived in France in the 19th century, furniture makers embraced both Gothic and Renaissance design elements but this is the first time we have seen a draw-leaf library table with Gothic ornamentation. In this case while not exact, the intent is clear.

The base of this table involves a traditional trestle design with four main arches in the center and flanked by perpendicular panels of open tracery or fenestrage within the confines of an arch. Rather than the traditional pointed arch of Gothic design, a rounded one is used to contain a row of lancet arches at the base and topped by quatrefoils. Framing the arch on either side are tall, slender lancet arches.

As in other Gothic draw-leaf tables we have had, this one has a magnificent top in parquet design. The square insets of oak alternate in the direction of the grain, now basking in the rich patina of age.

The top and baseare united by a frieze of elliptical shapes containing a quatrefoil and a fleurette in the center. This is the same floral motif that is found in the open quatrefoils of the support panels and between the lancet arches at their base.

Overall, the effect is a stunning variation on the library table theme reworked and reinterpreted for fans of Gothic design.

Given the narrow dimensions of the table coupled with the ability to extend the top it would be ideal for a wine cellar or other space where a larger horizontal surface occasionally comes in handy.