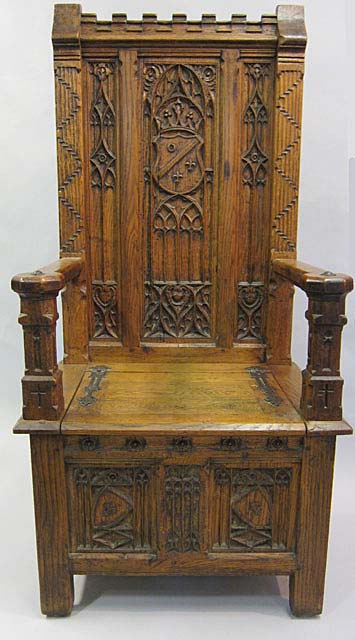 Game of Thrones may have ended its run but the passion for regal seating has not subsided. French designers of furniture in the late 19th and early 20th centuries loved thrones too and lead us to believe that many a Frenchman (or woman) longed to have one of these "lord-of-the-manor" chairs at home or at the office.

As we know from our research about the development of furniture in the Middle Ages, this style of throne chair began life as a chest whose top became the seat (and still opens for purposes of stashing away valuable objects). A tall back and a pair of armrests were added and, as in this case, the vertical surfaces are intricately carved.

Interestingly, these high-backed chairs were not the seat of royalty in the Middle Ages and Renaissance, as we know from contemporary records of the Fauteuil Dagobert and of the seat from which Henri II ruled France before his untimely death during a ceremonial jousting match in 1559. Even Napoleon, who crowned himself emperor in 1804, reigned from a low-back chair still on display at Fontainebleau Castle. 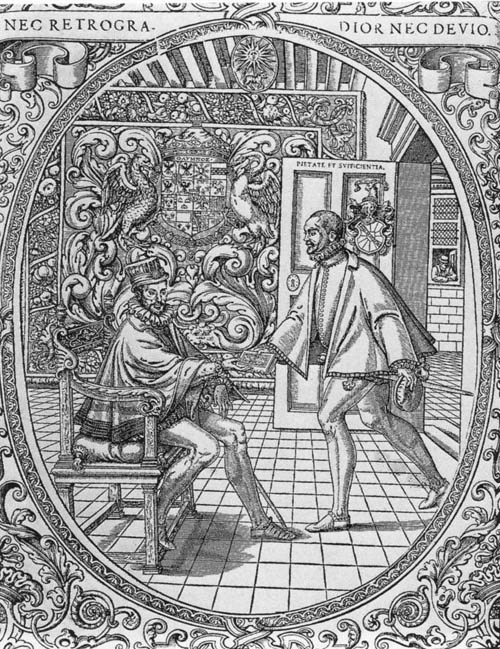 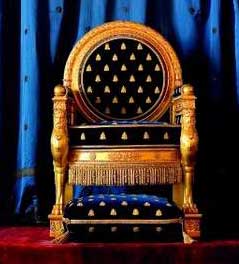 Throne of Napoleon I from Fontainebleau Castle

Rather, chairs with high backs developed in the Middle Ages for use in a cathedral as the seat reserved for its bishop. This style of chair was known as a chayre (sometimes chaire) or chaise cathèdre. The term “cathedral,” for church that is the seat of a bishop, derived directly from the use of this type of chair in early Christian basilicas.

Thanks to our research sparked by Agnes Bos' groundbreaking survey of Medieval and Renaissance furniture in the collection of the Louvre* we have found the piece that likely was the model for this chair, made around 1910. For the exhibition of French art at the Universal Exposition of 1900, at the Petit Palais in Paris, many collectors provided items as detailed in the Catalogue published for the event (and whose editors included Emile Molinier, a renowned curator and art historian at the time). Item 2798 in the catalogue, with a photo on page 153, is the following chair. The description indicates it is from the 15th century, made of walnut, and from the collection of the industrialist Michel Boy. 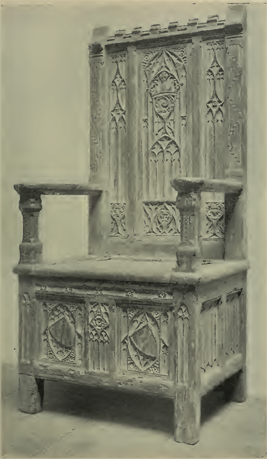 Chaire from the Boy Collection

In terms of overall design as well as decorative elements, our chair is a copy of the one from the Boy Collection, signaling how important the Universal Exposition was for the continuing interest in Gothic and Renaissance style furniture into the early 20th century. The photo from the Catalogue is a bit blurry and so some of the details cannot be compared exactly, but the overall impression is one of our chair being a faithful copy in oak of the original in walnut.

What happened to the chair after the exhibition is a mystery. It does not appear to have been among the items included in the sale at auction, in 1905, of the Michel Boy Collection in Paris by Georges Petit. From a catalog published in 2013 for an exhibit at the Metropolitan Museum of Art, including items from the collection of Georges Hoentschel acquired by J. Pierpont Morgan in the early 20th century and donated to the museum, we know that both Molinier and Hoentschel acquired pieces from M. Boy. However, they appear to have been statues and objets d'art rather than furniture. Whatever its life post-exposition, that the chair from the Boy Collection was copied illustrates the importance of fashion and its influence on the business of furniture-making while fulfilling a demand for objects inspired by the styles of centuries past.

History shows that when Gothic became stylish in the 19th century, sparked by the renovation of Notre Dame de Paris and other buildings dating from the Middle Ages, the high-backed chair experienced a Renaissance of its own. Apart from use in an ecclesiastical setting, the chairs were found in palaces and, in addition to “throne chairs,” came to be known in English as “hall chairs.”

The 19th century revival of Gothic style also spurred a renewed interest in heraldry and the use of coats-of-arms on cabinets, chests, and chairs. Here, the coat-of-arms is central to the design of the back of the chair. Visible when no one is seated, it may have been occupied regularly by the person who commissioned it to publicize his family’s crest by linking it to a 15th century chair from the Exposition.

The coat-of-arms consists of a badge-style shield below a crown. It is not the same as the coat-of-arms on the 15th century chair from the Boy Collection. We are not experts in heraldry but thanks to the website Fleur-de-Lis Designs we learned that the circle on the left side of the shield is an annulet representing the fifth-born son of a family and signifies fidelity and commitment. The two fleur-de-lys on the right side of the shield could mean sixth-born (perhaps two because of twins?) but we prefer to ascribe a link to French royalty who adopted the fleur-de-lys as their symbol, especially since the shield is capped here by a crown. The shield is divided in half by a diagonal bend or barre running from top right to bottom left. Beyond this speculation, our research has not linked the coat-of-arms to a specific family or place.

The chair is rich in other intricately carved elements, especially characteristic of Gothic style and almost identical to those on the chair from the Boy Collection. For example, lancet arches abound. These tall, slim arches, with a pointed figure atop notches or small indentations, represent one of the most basic components of Gothic architecture. In the central part of the back of this chair, lancet arches contained within broader arches form the base on which the shield (escutcheon) of the coat-of-arms rests. Enclosing the shield and the crown above it is a graceful ogee arch whose top extends upward into the top section of the larger arch running the height of the back. The larger arch is framed on either side by super skinny lancet arches poised on top of one another. Lancet arches are also found on sections filled with Gothic motifs on either side of the main part of the back containing the coat-of-arms.

The outer sides of the top of the chair include a spiral zigzag pattern that is highly unusual. We speculate that it is designed to remind us of the pillars in Gothic cathedrals with their intricate spiral patterns symbolizing eternal life.

Atop the chair is an unusual rail reminiscent of crenellations atop medieval castles. This is in contrast to the more customary topping for a throne chair in the form of a railing of open tracery. However, the crenellations may have been used to impart a sense of the chair as a fortress, the seat of authority for a powerful occupant whose coat-of-arms it displays.

At the base of the central and side sections of the back are blocks of Gothic ornament including a heart-shaped motif and soufflets or elliptical-shaped quatrefoils. Again, these mirror the Boy chair. While we have seen heart-shaped tracery in other Gothic-style pieces from our collection, such as bench 5202 and bench 4173, this element is different in that its outline is wider and it seems more akin to vegetation due to the curlicues turning inward at the top. We have not seen such a figure before.

The front of the base reminds the viewer that throne chairs evolved from Gothic chests whose fronts also involved elaborate tracery designs with lancet arches and trefoils (see, for example, chest 4158). Angled shields each contain one fleur-de-lys. It is not possible to discern, in the photo above from the Catalogue for the Universal Exposition, what is contained within each shield, but it does not appear to be a fleur-de-lys. However, this nod to chests continues on the sides of the base, where linen-fold panels are used, just as on Gothic chests and on the chair from the Boy Collection.

As mentioned above, the seat lifts up to supply a roomy storage compartment. Hinges connecting the chair to the top of the seat are original and highly decorative, in keeping with the tracery designs on the chair’s back and on the front of the base.

That the chair may have had some ecclesiastical function is signaled by the cross carved into the front of the armrests. Or it might mean that the person who commissioned it wanted to signal his or her faith by including the crosses. It is not possible to see these details in the photo of the chair from the Boy Collection.

Just as the top of the back reminds us of massive crenellated structures, the armrests are unusually wide and extend out to a hexagonal end-piece reminiscent of extensions of corners atop a medieval castle from which its defenders would shoot arrows and pour pots of boiling oil at any attackers below. The vertical supports are carved with vertical indentations at the four corners, mimicking architectural columns. Facing outward, and above the cross, is a single lancet arch.

The chair sits on short, square, unornamented legs, lending a further sense of importance and fortification – a castle masquerading as a chair.

As photos of the back of the chair indicate, it was made of three main rectangular panels, as the basis for the Gothic tracery on the front, separated by two verticals that are relatively unadorned on their front sides. The reverse sides of these verticals have several deep gouges. However, they do not affect the structural integrity of the throne chair and are not visible from the front.

There is some damage to the oak near the middle of the tall vertical piece at the right side of the back (when viewed from the rear) and to the horizontal member at the base (between the chair’s back legs).

The chair is well-preserved, especially its intricate carving that is quite extraordinary. This is reinforced when we consider that our chair is made of oak, one of the hardest of woods, compared to the somewhat softer walnut of the original from which it was copied.

This throne chair could function as a "hall chair" in the entryway of a home but could also be placed at the head of a Gothic dining table, including one used as a conference table.