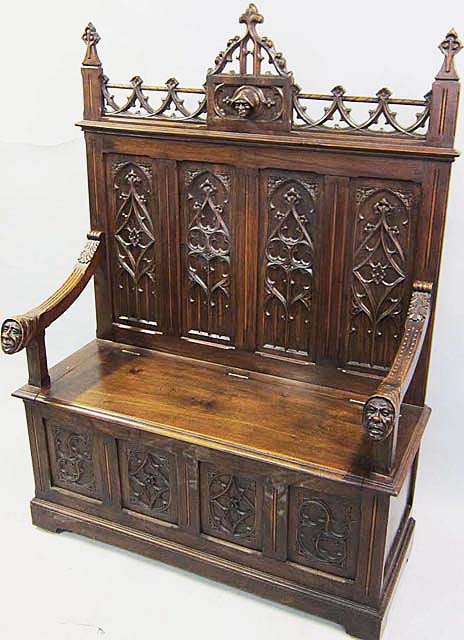 This bench is a paean to High Gothic styling as interpreted by 19th century French craftsmen whose originality and whimsy make this among the most captivating interpretations of French Gothic Revival we have seen. In its overall structure, it is faithful to its roots in the so-called Flamboyant Gothic, making generous use of fenestrage or tracery decoration whose inspiration lies in the elaborate designs of stained glass windows in Gothic cathedrals.

As a type of furniture, the bench or banc is one of the oldest forms and like others, traces its lineage to the chest or coffre. By adding a backrest and arms, the chest became a bench while retaining its storage feature with the seat flipping up to reveal the container that was once the fundamental purpose for a chest.

In chateaus, the vestibules or entry areas were typically ringed with benches which were heavily carved and often covered in pillows made of luxurious fabrics or draped with tapestries or carpets. Benches were also used in the bed chamber, frequently near the fire, in order to block drafts and increase warmth. Benches were also used at tables for meals in the main hall of a chateau.

19th century re-interpretations of earlier designs often included the contrast of happy and sad using figures at the end of the armrests. On the front of the left armrest might a frowning or melancholy face whereas on the right armrest would be a merry face. Here, the expressions on the faces are more ambiguous, although beautifully and intricately carved.

The skillfully carved fenestrage on this bench is made up of four panels on the back and four below the seat. In each case, the two outermost panels match, as do the two innermost ones. The central design of the innermost panels of the backrest of the bench is mimicked in the two outermost panels below the seat. The panels on the backrest of the bench use the typical design of pointed arches at the bottom with elaborate curving shapes above. In the case of the central panels, the area above the pointed arches includes two hearts, one of which is inverted above the other as when a valentine is cut from paper folded at the top of the heart and then opened. The finials on either side atop the vertical members are three-dimensional flames, the Old French term for which put the flamb in Flamboyant Gothic.

Typical of 19th century reinterpretations of bench designs from the Middle Ages, the armrests have shallow channels into which overlapping scales have been sculpted. Beautifully carved, scrolled acanthus leaves crown the armrests where they join the back of the bench.

Especially remarkable about this bench is the top of the back where a tall central piece of open tracery culminates in a flamboyant finial above a rectangular block from which protrudes the head of a hooded figure. On either side are railings of open tracery based on an interlocking half-moon design united by a slim wooden bar bearing a diagonal pattern. This is a typical pattern seen on Gothic dining chairs such as item 5116.

Just as its forbears retained the storage aspects of benches descended from chests, this bench also has a seat which doubles as the lid for the enclosed area below. In keeping with 19th century reverence for Late Gothic furniture in the flamboyant style, this piece is made from solid walnut and has attained a lush patina with age.

While ideal in an entryway or foyer, this bench would also work well in a living room, study, library or kitchen where its versatility as a storage space would also be appreciated. In very good condition, the bench is heavy, sturdy, and ready for centuries more of enjoyment.