Before we launch into the story of the glorious ornamentation on this throne chair, we must explain the piece of string visible in front of the bottom. It is included in some of the photos in order to show how it is possible to access a tiny hidden compartment below the seat but for which the cabinetmaker included no pull-tab -- so we used a string wedged into the opening. Considering that we discovered it quite by accident, the compartment may have been intended to be secret all along. The seat does not flip up to reveal a storage space, as with the typical throne-style chair.

In overall structure, this high-backed chair owes its heritage to a chaise cathèdre or throne used by a bishop in a cathedral. It is, however, decidedly not religious in its ornamentation. Rather, it is emphatically humanist in the style of the so-called Second Renaissance in France and harking back to ancient Rome.

In its design, the chair incorporates a number of elements from classical architecture as reinterpreted in the Renaissance. These include the tall columns extending upward from the armrests, the double-scrolled element at the front of each armrest, and the square panels on the front below the seat.

The scrolled element is especially remarkable. It reminds us of a design commonly used for spandrels uniting vertical and horizontal elements of a building. In keeping with those origins, it boasts an intricately carved palm frond. The frond is tightly curled at the base and then unfurls upward, flowing into a similarly rolled up design recognizable as the capital of an Ionic pilaster. In its use here, to frame the sides of the seating area, the scrolled element is highly unusual. But it also reminds us of the feet of Renaissance Revival items, such as library table 5192, library table 4137, and library table 4112, incorporating the motif of an unfurling palm frond.

The two matching and intricately carved panels comprising the seat back represent what was a tectonic shift in styles and tastes for 16th century France when Gothic tracery, in all its virtuosic variants, was consigned to the scrap heap of design history until its revival in the 19th century. With our backgrounds in the fashion industry, including our long stints in Paris and Los Angeles, we adore stories about how fashion — embodied by whatever is radically new and different — drove trends and changed styles of furniture design. For example, in the description of chairs 4129, we discussed how the headdresses of Brazilian Indians living on a farm in Normandy inspired the carvings used on cabinets and other furniture items during the 16th century in France.

Not to be outdone, the Italians succumbed to a fashion fad of their own in this same period. Known as grotesque decoration, after the grottoes or underground remains of long-buried Roman villas, Renaissance artists conceived an entirely new vocabulary of design from what they found displayed on the walls and ceilings. Painters, such as Raphael and Pinturicchio, had themselves lowered by rope into these archaeological sites while armed with torches to illuminate the ancient rooms and with sketch books to copy the intriguing frescoes. The result was not only a new array of decorative elements (volutes, tendrils, vases, candelabras, masks, acanthus leaves, festoons, etc.) used to fill space and to enchant the eye, but also a way of arranging these into integrated wholes such as the panels forming the back of this throne chair. These new elements spread like wildfire throughout Italy and beyond, as only a fresh fashion can, and were incorporated into everything from papal apartments in the Vatican, to altarpieces in obscure Umbrian churches, to the private residences of Rome's elite such as the Villa Farnesina. Ceramics works sprang up in towns such as Urbino, Deruta, and Gubbio, making more portable versions of these popular designs and inspiring their revival at Gien in the 19th century. Grotesque patterns even found their way onto armor and armaments.

Art historians have speculated that the wall and ceiling decorations rediscovered in the villas of ancient Rome, including the vast Domus Aurea built for Emperor Nero, were for private amusement. These are in contrast to the serious depictions of military victories, as well as gods and goddesses, found on arches, temples, columns, and on other public art around the city. As a result, private decoration alla grottesca had fantasy and diversion as its objectives. Included were figures suspended amidst larger-than-life props as well as male faces, later to be termed grotesques, of wild-eyed chaps with exuberant hair, flowing beards, and often with tongues hanging out of their mouths. Some of these faces appear as props or masques from theatrical works, depicted as details in larger scenes on the walls of homes. We saw the following ones at the Museo Archeologico Nazionale in Naples when we visited in 2014. 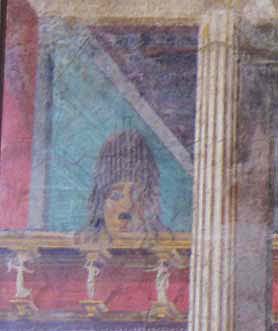 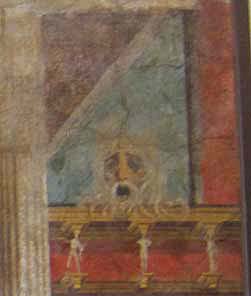 This last characteristic has not been adequately explained but is central to the two matching panels of this chair. The tongue extends downward from a face, whose mustache, beard, and ear coverings are carved acanthus leaves, and morphs into the slender neck of a vase. Atop the head is a pedestal from which acanthus leaves unfurl and extend upward from a central stalk crowned by the tip of an acanthus leaf. The carving is exquisite, both in detail and execution, resulting in the consummate example of grotesque decoration blending disparate elements into an imaginative whole.

Surrounding the bottom of the chair is a decorative trim of gadrooning. It is mirrored in the lower part of the "cup and cover" finials atop the broad decorative moulding that comprises the top of the chair. The gadrooning at the bottom is highly unusual because of the overlaid acanthus leaves at the corners and in the center of the front. These affirm a stylistic unity of upper and lower parts of the chair.

This throne chair is made of solid walnut in a light color that the French call "natural wood" or bois naturel. It allows the details of the carving to be admired amidst the fine grain and rich patina.

The chair is in very good condition with none of the cracks or splits often seen on the back panels of throne chairs. While there are some scratches on the top of the seat (shown in the detail photo below) we have not attempted to eliminate them. In keeping with norms in Europe prior to the industrial revolution, and especially for a chair as regal as this one, an elaborate cushion would always have adorned the seat. Such a hand-made textile would have been far more expensive than the furniture it graced, serving to validate the erudition and wealth of its owner while, and as in this case, obscuring any minor flaws on the seat.

A chair of this type with a commanding presence and with exquisite carving invites closer examination in a setting such as a well-lit entry hall. Matched with it could be other pieces with similar elements of Renaissance Revival style and made of light-colored walnut such as cabinet 1024 and table 5192.