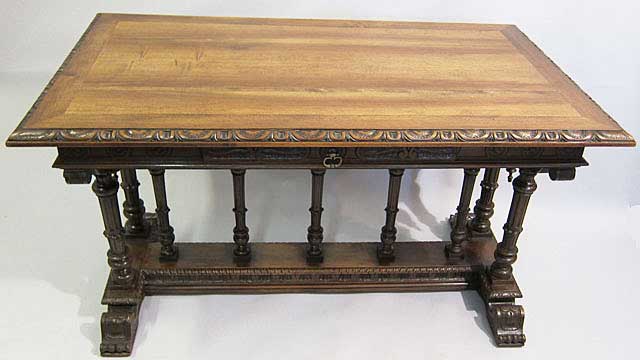 The library table on a trestle base has always been among our favorite designs, evoking as it does a 16th century high-ceilinged salon brimming with leather-bound volumes -- a place for contemplation and to indulge a love of learning. Such a table would be resting on a Turkish carpet in the middle of the room, rather than along a wall, so its owner could plunk down several volumes at a time and consult them in a centralized location. This placement dates back to Roman times when scrolls, stacked on shelves, were taken down and unfurled on a stone table fixed in the center of a room. Consisting of a massive top resting on carved pedestals at each end, the table was called a cartibulum. With the length of the table top approximately 1.6 times its width, the standardized size based on the golden section developed in ancient Greece, the library table as we now know it was crafted in walnut by artisans in Renaissance Italy evoking the marble versions discovered in the ruins of imperial Rome.

The trestle design for the base of a library table involves an H-shaped stretcher whose cross member runs the length of the table and connects to vertical supports at either end. Having replaced a board resting atop sawhorses, the trestle table was the standard for the refectory or dining room of monasteries where long, narrow tables hosted the monks' communal meals. When transformed for smaller spaces, the result was a table whose proportions were based on the golden section from antiquity. Retaining the H-shaped design, verticals were added along the length of the stretcher. Typically, these verticals were shaped as columns supporting Roman arches and lending a distinctly architectural feel to the structure. The result is a magnificent table such as this one blending the time-honored models of library table and trestle table.

With command of the basics, the creator of this late 19th century table employed numerous decorative elements based on French Renaissance design. For example, palm fronds (palmettes) and acanthus leaves are prominent. The table's top has a narrow border of semicircular palm fronds. Rectangular panels on either side of the drawer-pull feature undulating palm fronds extending outward from an omega figure. Smaller palm fronds frame the female face found at each end of the table, just below the top. The central stretcher is ornamented with small palm fronds. The base of the pedestals, facing outward, includes palm fronds radiating away from a design with a flower at the center. The columns also integrate elements of palm fronds. The wider columns supporting the ends of the table incorporate a palm design in the shaft. For the narrower fluted columns on the stretcher, palm fronds encircle the shaft just below the volute as if opening out to reveal it.

Acanthus leaves are less prominent than the palm fronds but remain the basis for the intricate carving that comprises the spandrels, at the corners of the table, with leaves scrolled and unfurling but not completely. The feet extending outward from the vertical pedestals at the ends of the table are based on a common Renaissance design of scrolled acanthus leaves. In this case, however, a palm frond has been carved into the top of the foot.

The female face on each end of the table is especially unusual in the use of curled strapwork above the forehead and framing the jaw. Her expression is clear-eyed with the mouth almost smiling, as if plucked from a Hellenistic statue. Especially luxuriant is the carving of the hair, somewhat tousled and falling softly around the face. When we see faces like this, representing neither angels nor demons, we wonder whether a real woman was envisioned -- the daughter of the owner, a friend of the craftsman, an idealized muse? The answers to these questions are lost to history.

The single toupie or suspended element at each end of the table poses an enigma. The ornamentation does not match any other elements of the table. Its location is unusual since toupies are used at the corners of tables. While these toupies do not appear to be an afterthought, their presence remains puzzling while adding little to the overall effect. Also at either end are ebonized panels, outlined in a lighter shade, designed to give the impression of inlay or intarsia. Again, the "why" is a mystery.

The color of the table is extraordinary. What the French call bois naturel is the natural shade of walnut without the dark stain often applied to Renaissance style furniture in the 19th century to make it appear older. The lighter color allows the rich patina of the wood to shine through, especially the grain of the top and the intricate carving of elements such as the palm fronds and hair. The most representative color, given the challenges of photographing dark furniture, is in the image at the top of this page.

Rich in architectural detail and carving that is both exquisite and complex, this library table is a magnificent example of 19th century French craftsmanship evoking the best of Renaissance design.

Library tables typically do not have drawers but this one has a single central drawer making it usable as a desk. It could also serve as a console table behind a sofa. However, we favor its highest and best use when it is placed in the center of a room, its beauty appreciated from all directions.