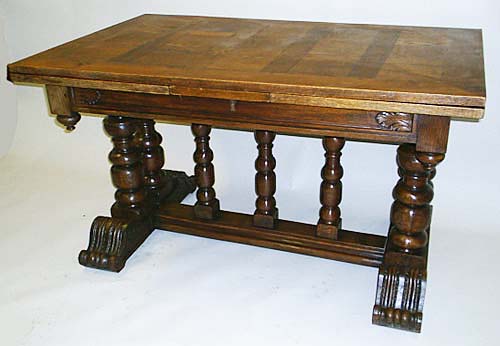 This solid oak draw leaf table is a recent acquisition that suggests Henri II or Louis XIII in styles considering its overall design based on a trestle structure. The top is inlaid oak in the French parquet manner, and it has two draw leaf extensions that make the total length 90" with them extended. The top has been refinished, so that the depth of the grain and color are at their best. The multiple coats of lacquer are sympathetic to the original finish.

It has four sturdy main oak turnings and three smaller ones, under the center of the top, attached to the central stretcher. At each of the four corners, under the top, are four poignés that resemble upside down finials or toupies. The base is stabilized with the massive scrolls at the ends of the supporting stretchers, that incorporate a double plume or feather motif that is typical of this style, and period. Age cracks are visible in the four main columns, but do not affect the extreme sturdiness of the table.

A unique feature of this table is its width to length ratio. With the extensions opened, it becomes an excellent table to place behind a sofa to accommodate lamps to light it's occupants, as well as the traditional use in a smaller dining space.