This table is so large we had to photograph it outside, leading to effects of light and shadow

Just as with Gothic architecture, items of Gothic style furniture sometimes require the viewer to make heroic efforts in order to admire the most interesting bits. In the case of architecture, it may mean craning the neck in order to catch a glimpse of ornament obscured in the heights of a Gothic cathedral. In the case of this table, it means sitting down and leaning under it to appreciate the magnificent open fenestrage or tracery at the center of the base. Both are worth the effort.

And so, we will start our description of this table from the bottom up. What makes it unique is the use of panels of open tracery and, specifically, the presence of three such panels: one in the center and two perpendicular to it, facing toward the ends of the table.

Their basic design involves two matching sections, reminding us of the designs we cut from folded paper as children and opened outward to reveal a complex design. The panel in the center is wider than the two on the ends and includes an additional section in the middle not seen on the panels at the ends.

Forming the main figure, used twice on all three panels, is a tall ogee or "S" shaped arch. Each extends the full height of the panel and contains other elements of tracery. Such a sweeping arch is characteristic of the late Gothic style known as flamboyant for the use at the top of the arch of a stylized flame (flambe in Old French). For more about Gothic style and the flamboyant era, see our page on stylistic origins. Here, such an ornament is used at the top of the arch but also to supply crocketing on either side as the arch curves upward.

At the base of the central panel is a row of lancet arches, rather shorter in stature than what we typically see. 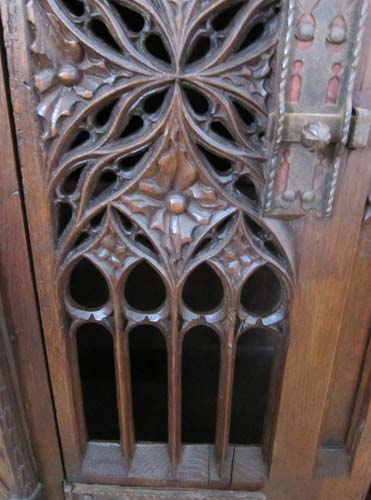 Compare to these taller lancet arches on Cabinet 4190

Sometimes with lancet arches, the indentations or cusps on either side meet in the middle, especially those carved from stone. In the case of arches made of wood for furniture, it is common to leave a gap because of the natural shrinkage and expansion taking place over the life of a piece and so as to prevent the arch from failing. In the case of this table, some of the tiny cusps forming the indentations are gone, as shown in the photos.

Above the lancet arches is a row including four trefoils or three-lobed figures. They resemble inverted heart shapes whose two open lobes at the bottom are soufflets or circular shapes tapered at one end, resembling bellows. The third or upper lobe is an open ellipse tapering to a point at the upper and lower ends.

Above the row of trefoils are two circles designed to evoke a rose window from a Gothic cathedral. The tracery within each circle is made up of four mouchettes or curving figures that are circular at one end and taper to a point at the other, ornamented by indentations or cusps on both sides. While both the soufflet and the mouchette are characterized by tapering to a point at one end, the soufflet is symmetrical in shape while the mouchette curves gently to one side and may be curved at one end.

In this variation of an "H"-shaped stretcher, horizontal supports radiate outward at an angle from the center, connecting four columns with the tracery panels.

The columns or legs for this table include additional elements of Gothic design. As with columns commonly seen in Gothic cathedrals and on which these legs were evidently modeled, they are fluted in a diagonal pattern that runs from top to bottom.

Crowning each column is an elaborate capital of carved acanthus leaves. Richly detailed, the carver has taken what is, in reality, a delicate leaf (of the kind much loved by the local rabbits who visit our garden), and bestowed a graceful sturdiness for the enjoyment of both the eyes and the fingertips of anyone examining this table's base.

Each column's base is made up of multiple levels of solid walnut similar to stone versions found in ancient Greece, such as the sturdy and long-lived ones from the Temple of the Olympian Zeus below the Acropolis in Athens.

Moving toward the top, just underneath it is a frieze in the design of simple moulding so as not to take away from the elaborate elements found below it in the table's base. Unadorned, it allows the beauty of the walnut in both the grain and undulating growth patterns to be appreciated.

As the following detailed photo shows, there are miniscule holes showing insect damage (more about that, below).

The top of this table, whether closed or extended with its inserts, makes one wonder why anyone would want to cover the top of a magnificent walnut table with a table cloth?

When we purchased the table in France it was missing its two leaves or inserts. This is not an uncommon situation, especially for tables dating back to the 19th century. As a result, our master wood-worker made two replacement inserts, including their frieze, from old growth walnut, a supply of which we had purchased in France some years back for just this purpose. (As mentioned above, we photographed the table outdoors, due to its size, and so areas of light and shadow appear on the top.)

Parts of the original table top show evidence of insect infestation in the form of minute holes. When the table arrived from France, we examined it closely and concluded that the damage dated from decades past and did not impact the structure. In the process of refinishing the table's top to match the new inserts, multiple layers of lacquer have filled the holes and have made them less noticeable. Apparently, French bugs treasure old-growth walnut as much as modern antique dealers do!

In order to make the insertion of the leaves and the extension process work smoothly, the table has been retrofitted with a modern German stainless steel sliding mechanism that can be used easily by one person instead of the two or three needed to wrestle the original system apart. Detailed photos of this mechanism are included in the description of table 4110. The mechanism of this table 5217 is partially visible in the following photo. Because it is made of stainless steel, the mechanism is not subject to the warping that often happens with wooden sliding mechanisms underneath antique tables. It also provides strength to support the top and to avoid sagging when fully extended. According to the manufacturer, the mechanism has a load capacity of up to 98 kg. This innovative stainless steel mechanism should allow for at least another century of use and enjoyment of this table!

Owing to the table's new leaves, this table is ideal for large gatherings in its expanded mode but downsizes quickly for more intimate gatherings. Complementing the elaborate open tracery panels of the table's base, dining chairs such as item 5138 would be ideal.