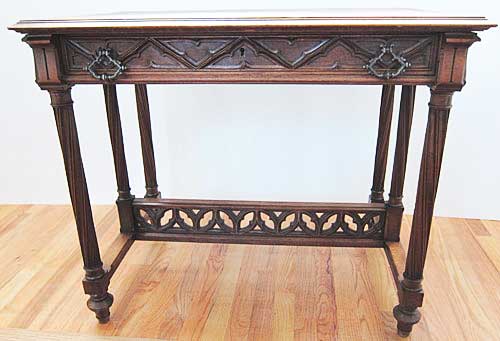 This writing desk is in the tradition of petite French tables used by authors for penning novels and hostesses for tending to correspondence. Stationery and other supplies were kept in the central drawer, always at the ready.

In today's world where people rarely write missives and instead use their computers, tablets, or smart phones, the utility of these small tables has proved especially resilient and they are more versatile than ever. With beds now on taller platforms, the table's height is ideal for a nightstand. Its narrow depth makes it ideal for a console table behind a sofa. Paired with a Gothic style chair such as 9221 or 4172, it could return to its origins as a desk for composing prose, albeit using a laptop. The possibilities are endless.

In overall structure, it is based on the trestle table from medieval times when an "H"-shaped stretcher ran lengthwise and included columns to support the table top. As tables got lighter in weight and drawers were substituted for the solid plank comprising the top, the supporting columns were eliminated but the stretcher remained, uniting the legs at the four corners. While there are several nicks on one of the legs, we consider this to be minor and have not attempted a repair.

True to its Gothic Revival style, the table features carved tracery or fenestrage both on the trestle and along the frieze below the top. The tracery at the base is "open," meaning that the interiors have been carved away from the pairs of elliptical shapes that unite at their tops to form half-moons. The tracery used for the frieze is made up of isosceles triangles in an alternating pattern. This includes the front of the single drawer which runs the length of the table. Especially enchanting are the two drawer pulls evoking Gothic style with their overall tracery design and the crocketing along the outer edges.

Inside the drawer a label is mounted, indicating that the maker is the legendary French furniture firm Mercier Frères. The company was in the forefront of all the major furniture styles from the time of its founding in 1828 and for over a century thereafter in the heart of Paris' furniture district, the Faubourg Saint-Antoine. Extremely successful, the firm even opened branches during the 1920s in Buenos Aires and New York. Items in the Empire and Art Nouveau styles are especially prized and still sell for top-dollar at Sotheby's and Christie's. While it appears that Gothic Revival was not among the styles produced in large quantities, to have found an example in excellent condition and including the original key for the drawer, is thrilling. As to dating this table, we know it cannot be older than 1867 when the Mercier company first adopted the name "Mercier Frères." We estimate that it was made around 1890 when the Gothic fashion was at its height in Paris.

In keeping with its highest and best use when created, the table could be a writing desk. It could also serve a number of other functions including as a bedside table, as a console table behind a sofa, or in an entryway between two Gothic style chairs.