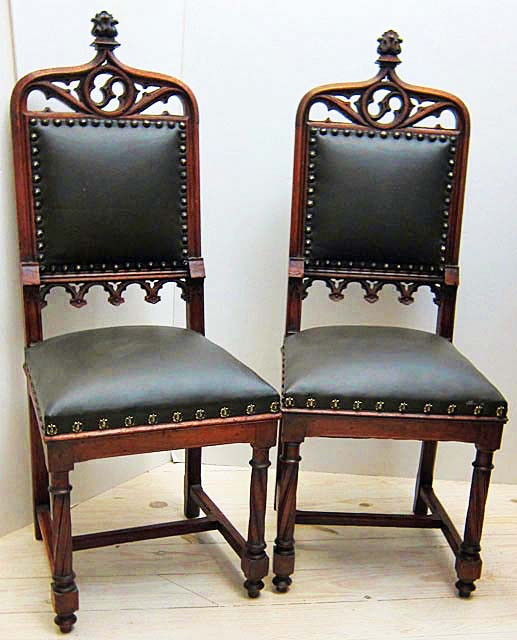 These two chairs are among the favorites of all those we have ever offered in the Gothic style. Involving two characteristics we rarely find -- solid walnut and rich leather upholstery -- they are unique in our collection and in our hearts!

While oak is more genuinely "Gothic," when you consider the centuries spanning the Middle Ages, during which durability and longevity were prized above all. It is, however, "hard as rock," making it difficult to carve intricate patterns such as tracery or fenestrage. Walnut, on the other hand, is somewhat less hard and so lends itself to the motifs so prized in that era yet so difficult to execute in oak. By the close of the Middle Ages, and continuing on into the Renaissance, walnut was favored in France for the more elegant and decorative pieces while oak remained a less expensive choice for less refined objects. As it happened, much of France was blessed with walnut trees and its artisans took full advantage of this material, beginning in the 15th century and continuing through to the 19th when these chairs were crafted.

The solid walnut from which these chairs were made is in the color the French would call naturel in that it is not deeply stained and so allows the natural beauty of the grain to shine through and to enhance a viewer's enjoyment of the carving. The designs incorporated in that carving include the basics of French tracery or fenestrage, including the mouchette, the soufflet, and the trefoil. Their origins are in architecture, including the elements of a Gothic stained glass window or vitrail.

The mouchette is a curved, two-lobed figure that is pinched in the middle, its origins owed to a candle and the motion of pinching a flame to extinguish it (moucher). The lobes can be symmetrical or, as in the case of the figures within the circle at the top of these chairs, at least one lobe must taper to a point -- like a flame. The notion of a flame is also important figuratively since the mouchette developed in what is called the flamboyant period of Gothic style in the late Middle Ages when ornaments, such as the toupie at the top of the back of these chairs, ended in a flame-like shape or flambe, the word in Old French for a small flame.

The figures at the top of the chair, enclosed in the curves at either side, are soufflets. Again, the name is evocative. Unlike the mouchette, which is always curved, the soufflet is not since it takes its name from the classic shape of a bellows used to blow air and coax a flame in the large and elaborate fireplaces of the time. Carved on a straight axis, one end is rounded -- like the central part of the bellows -- and the other is elongated and tapered.

Filling the last of the spaces at the top of these chairs is the trefoil or three-lobed figure whose name harks back to the words for three (trois) and the word for lobe or leaf (feuil). All of these figures are beautifully carved to bring out the richness of the walnut.

Continuing the architectural theme, the base of the chair is comprised of four legs connected by an "H" shaped stretcher. Each of the legs includes a central shaft based on the design for columns in Gothic cathedrals, including the diagonal lines sweeping from top to bottom at a gentle angle.

The chairs are covered in rich, dark brown cowhide to complement perfectly the lighter, natural color of the walnut and to set off its patina. Decorative nails have been used to attach the leather. They are modern reproductions of nails used in 19th century France to evoke the rosette or rose-shaped design that also owes its origin to Gothic architecture.

This pair of chairs would be ideal at a small table or on either side of a chest in an entryway. While serving elegantly as occasional chairs they could also be part of a dining set incorporating a variety of Gothic style chairs such as our items dining chairs 5116 and leather chairs 9221.