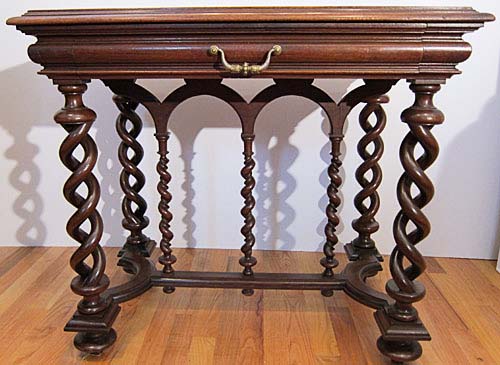 This side table belongs to a tradition of virtuosity and highly skilled carving that spanned more than a century, beginning in the late 18th century, as part of the revival of interest in Medieval and Renaissance styles. And while we feature several tables labeled "Louis XIII" for their use of torsades ("barley twists") they are more in the Country French tradition of massive and sturdy furniture and do not approach the level of refinement and delicacy of this table.

In reading accounts of furniture making of the 19th century, the ability to carve open torsades or spirals such as the four comprising the legs of this table was considered the height of professional accomplishment achieved by only a few artists. A table of similar design, although dating from the 17th century, was sold at auction in Paris in 1992 for $36,000!

In overall structure, this table can be classified as a "writing desk" because of its lone drawer, from the era in which people still wrote letters by hand on fine paper with pen and inkwell. Thankfully, unlike many 19th century writing desks we have encountered, there are no tell-tale ink spills on the top or in the drawer.

The open torsade of the legs is unusual not only for the difficulty of execution but also for the grace and weightlessness it conveys by the graceful spirals as they erupt from the base and then disappear into the top. The legs sit atop a base in the shape of an "H" but with crescent-moon shapes (echoing the curves of the torsades), as the outer members rather than perpendicular pieces of wood. Across the top of the uniting horizontal of the "H" and supporting the central section of the table's top are two central arches and two-half arches supported by intricately carved double-torsades - a larger diameter spiral interspersed with a smaller one.

This design for the supporting structure can be traced directly to the library tables of the late Middle Ages and early Renaissance periods and a fondness for architectural detail. See, for example, table 9210, table 9218, and table 9219. With a salute to furniture of the Middle Ages, the table rests on bun feet, also known as pieds de camembert for their similarity to the shape of the famous cheeses (and the French tendency to relate all things to food!).

The four sides of the top of the table reflect an affection for the massive yet detailed mouldings of more architectural pieces, such as armoires, whose crown mouldings balance that of a broad base and provide a pleasing symmetry. That same spirit is embodied in this table representing a small yet beautifully conceived jewel of 19th century artistry.

The central drawer in the top is part of that same moulding and, but for the drawer pull of bronze in an exceptionally intricate casting, one would not suspect that a drawer was part of the construction.

The table is made of solid walnut with a visible yet subtle grain, leading us to think that the wood came from the cache of old growth trees available to artisans in the Burgundy region in the 19th century.

This table can serve many purposes from its original, as a writing table or small desk, to a console table behind a sofa or occasional table in a living room, office, or entryway. Owing to its size, it could also serve as a table between two beds or as a stand-alone table at bedside.