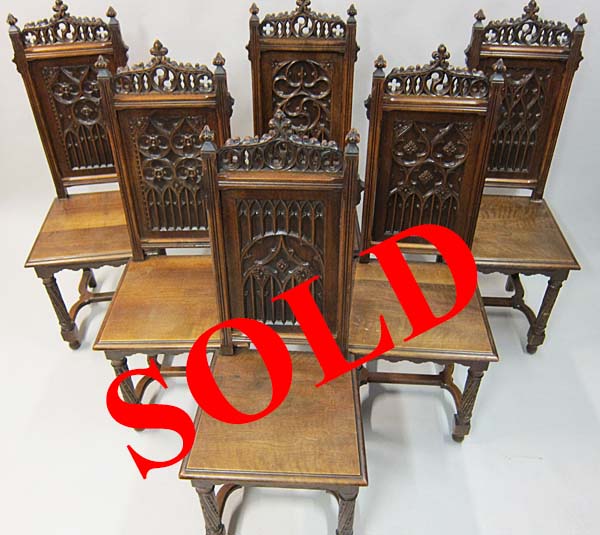 Dining chairs made in France in the Gothic style and over 100 years old are hard to find, but in walnut, intact, and a set of 6? Almost impossible. Most likely, these chairs once comprised a set of 12, the most common multiple from a time when dining rooms were grand and tables accommodated larger groups than today's typical dinner party. Being highly portable, chairs were easily separated from their cohorts whether at the time of the owner's demise and a divvying up among heirs, or destruction during the conflicts involving France. So a beautifully preserved set of six is a treat to behold.

Walnut chairs and Gothic design are the ideal pairing because of the ability to carve more intricately the details of tracery or fenestrage characteristic of Gothic architecture. Oak, harder by far and the more common material in both the Middle Ages and the 19th century revival of Gothic design in France, does not lend itself to the subtleties of expression we find in walnut.

All of these chairs have unique designs for the back. Although Chairs 2 and 6, below, are similar they are not identical. All share lancet arches at the base above which variations on a theme of quatrefoils, ellipses, and other standard shapes (mouchettes, fleurettes, and soufflets) abound. Two of the chairs (2 and 3, below) have a pattern called an entrelacs running from top to bottom on either side of the backs' central panel. The carving on each chair is magnificent, enhanced by the rich patina of the walnut from which it is carved.

The unifying element for the set is found in the top of each chair where a wide ogive arch frames open tracery. Alternating shapes based on the standard vocabulary of quatrefoil, mouchette and soufflet populate the interior of the arch which is topped by crocketing leading to a central toupie in the shape of a fleur-de-lys.

Virtuoso carving throughout makes these chairs masterpieces of the Gothic style even beyond the seat backs. For example, the base of each chair includes an "H" shaped stretcher and front support columns carved in the diagonal, spiral motif used on columns in Gothic cathedrals to symbolize eternal life.

This sturdy construction has served them well and, as with all the chairs we offer, they are intact and ready for more years of use and enjoyment.

Looking for 8 chairs instead of 6? Consider Item 4180. These chairs are substantially similar and would integrate well.

These chairs, including the possible addition of Chairs 4180, are ideal for surrounding a dining table such as Item 4110.