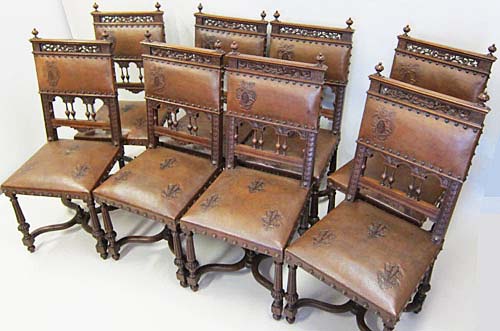 It remains rare and exciting to find not only a set of 8 French dining chairs intact but also that they would be made of oak and upholstered in Leather. These chairs are also unique in that the leather is embossed with a repeating design on the seats and with a monogram on the backs.

The leather on these chairs is wonderful - supple and richly decorated but clearly very durable. The pattern on the seats is a variation on the arabesque design so beloved by furniture designers in the Renaissance as well as its revival in the 19th century (see for example, credenza 3307 and cabinet 4157). Magnificently executed, it contrasts the pebbly texture of the seats with several different, smoother textures within the overall design.

The monogram on the upper back of each chair is flamboyant, incorporating the letter "B" surrounded by an escutcheon. Topping and surrounding the right side is a fearsome griffin, captured in the moment of landing and grasping the frame with one claw. Its mouth is open, and its head turned, gazing back toward its wings. Its tail wraps around the side of the escutcheon, coiling its way to the base of the design. All in all, a wonderful action scene is depicted, the griffin frozen in time. Whoever the "B" was, he or she had a fertile imagination and a love for Medieval and Renaissance heraldry, chivalry, and artistry.

The overall design of the chairs is architectural in nature, harking back to Roman designs that were revitalized in the Renaissance. Each back is comprised of three arches, elaborately carved, between the two, outer vertical members. These vertical members are intricately carved in an interlacing pattern of leaves, showing the attention to detail in designing and executing a part of a chair that is typically less ornamented.

Above the arches is the main section of the back, in leather, with the monogram described above. Capping the back is a magnificently carved railing in open tracery incorporating the acanthus leaf, that staple of Renaissance design and beloved element of 19th century re-interpreters. Atop the rail, at each side, are small finials (pinnacles) echoing the larger one, a toupie that unites the diagonal and gracefully curving elements of the stretcher supporting the chair. The fluting that defines the bun or bulging shape of the toupie is repeated, but with the narrower portion at the top, in the embellishments forming the base of each of the legs.

Another aspect of these chairs that makes them not only unique, but remarkable as modern seating, is the design of the decorative nails used to fasten the leather to the wooden frame. They are brass nails in an intricate circular design so popular in the late 19th century style known as Henri II but seen rarely today.

Combining disparate elements of the vocabulary of Renaissance design with the personalized monogram and the scary griffin, the designer of these chairs expresses a dedication to flawless execution while creating and preserving a new style known to the French as Henri II.

These chairs would be wonderful in the dining room of anyone whose first name, last name, company name, or favorite letter is "B." But their beauty and uniqueness should intrigue even those not having a relationship with "B" but longing to establish a heritage linked to these chairs.