Renaissance Style Antique Cabinet 4157 from France with Dolphins and Cherubs 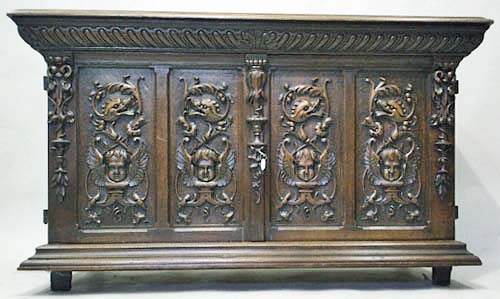 This cabinet is a pleasing reminder that decorative styles did not change from Medieval to Renaissance with the flip of a switch. In the 16th century, French craftsmen continued to employ medieval elements in what was otherwise a Renaissance piece of furniture, especially when adopting the Italian design vocabulary used by the craftsmen who came north with the future Queen of France, Catherine de' Medici of Florence.

In this decidedly Renaissance Revival style piece of cabinetry, a bit of the medieval remains in the form of the side panels in the plis-de-serviette or linen-fold design. Such panels, in richly varying versions of the linen-fold, were used to ornament the sides of cabinets, the fronts and sides of chests, and the backs of pot-boards of traditional Gothic dressoirs.

Renaissance elements are in full bloom on the front of this cabinet. Gone are the Gothic superstition that nothing could be completely identical to anything else, in favor of a more humanist delight in creating the same thing again and again. Here, the first and third panels, from the left, are identical to the second and fourth.

These panels reflect the affection of Renaissance artisans for elements of classic Greco-Roman design, known to them from casts and drawings used in workshops and adapted for more modern religious symbolism. The cherub (angel's head with wings) below swirling vegetation culminating in a dolphin's head is intriguing. In Italian Renaissance art, the dolphin was a symbol of salvation, and was particularly popular with Carlo Crivelli, who adopted the motif for armrests on the throne of the Virgin Mary in several of his paintings. In his "Mary Magdalene," now in the Rijksmuseum, he used a frieze of alternating cherubs' heads and dolphins.

With a nod to modern uses, this cabinet has a hole at the base in the back, as shown in the photo, below. We speculate that at one time the cabinet might have housed stereo equipment to play the intensely expressive madrigals of Carlo Gesualdo that evoke, in musical terms, the Italian style decoration gracing this cabinet.

Please note that the difficulty of photographing items of this size can result in color variations. We believe that the truest representation of the color is in the photograph at the top of this page.

Because it is fairly narrow, it would work well behind a sofa in a living room, in an entry way below a mirror, or even as an occasional cabinet in a home or as a credenza in an office.