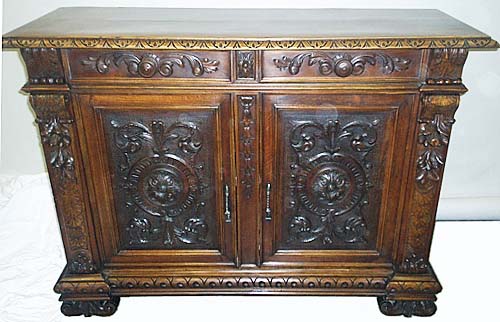 This richly sculpted Italian cabinet, along with the table that once accompanied it, fit perfectly with the recent trend for executives to opt for a table and "credenza" in their office rather than a desk with drawers, in the traditional sense. But even if purchased separately, the cabinet is a beauty in its own right and would work well in any setting.

Its origins are in the Renaissance cabinet called a credenza because people locked away precious food in it with confidence (credere meaning "to believe" or "trust"). It is typically a low cabinet (waist high) with a drawer (or two) in the frieze and one or two doors below. The credenza should not be mistaken for the French adaptation called a crédence, involving a design derived from a cupboard atop a table and eventually unified as one piece (also called a dressoir) with a pot board as an open shelf at the bottom.

In keeping with Italian Renaissance tradition, this cabinet is made of walnut, although some parts are impiallacciatura. We hesitate to call it "veneer" because it is far thicker than in the modern sense and is used sparingly on the unadorned horizontal and vertical surfaces. Like solid wood, it boasts a warm and pleasing patina.

This cabinet offers a cornucopia of Renaissance design motifs such as the acanthus leaf, palmette, scroll, rosette, and fruit garland. What initially attracted us to this cabinet was the intricately carved cascade of fruits. Popularized by Northern Italian Renaissance artists such as Carlo Crivelli with his enormous decorative vocabulary and used as a visual effect to separate the viewer from the picture plane, the cascade is particularly pleasing because it draws the eye from top to bottom, to focus on the virtuosity of the carving. It is also a reminder of the agricultural bounty of the countryside from which the design of this credenza sprang.

Although a bit more elaborate in its decoration, this cabinet reminded us of the magnificent 16th century credenza we saw in the Sitting Room during our visit in 2005 to Bernard Berenson's Villa I Tatti outside Florence, just as he was photographed with it in 1903 (as shown on the cover of Ernest Samuels' Bernard Berenson -- The Making of a Connoisseur).

As its Renaissance forebears did, this cabinet locks with a key (of which we have two) in order to give the modern owner a credenza that whatever is inside is safely tucked away.

Please note that it is difficult to photograph a piece such as this and capture the details without some distortion caused by flash, leading to the color being inconsistent among the photos. Ultimately, the cabinet is a rich, medium walnut color.

This cabinet is versatile and would do well in just about any room of a home or in an office.