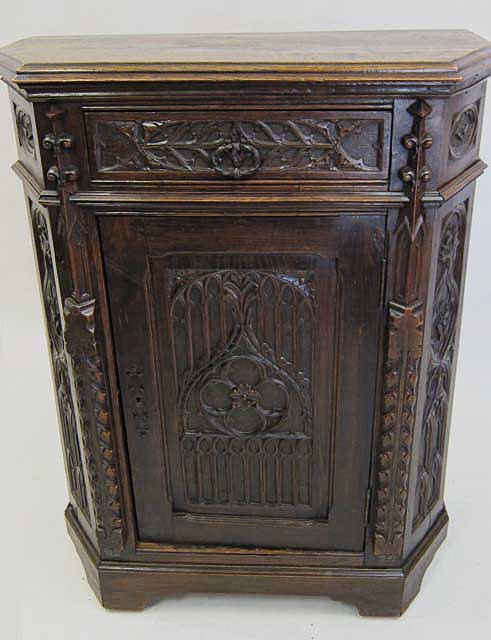 We were tempted to classify this small hexagonal piece as a confiturier, or a cabinet for storing jam, because its single drawer and central door fit this overall category of French antique furniture. However, that would not do justice to the elaborate carving and complex tracery or fenestrage that assures this cabinet pride of place rather than being relegated to a corner of the kitchen reserved for storage.

Digging into our collection of photos taken on visits to the Musée de Cluny (the National Museum of the Middle Ages) in Paris, we found a worthy ancestor in this hexagonal cabinet from the late Middle Ages. Although somewhat shorter in stature, the overall construction — a wide front section with two narrower angled sections on either side, the tall columns (pilasters) with spires on either side of the front — are all typical of the Flamboyant Gothic period at the end of the Middle Ages in France. This style was revived enthusiastically in the 19th century thanks to the efforts of architect Eugène Viollet-le-Duc and novelist Victor Hugo. For more about Flamboyant Gothic, visit our page on Stylistic Origins. It is in this broader category of exquisitely carved pieces that our Cabinet 5155 finds its rightful spot. 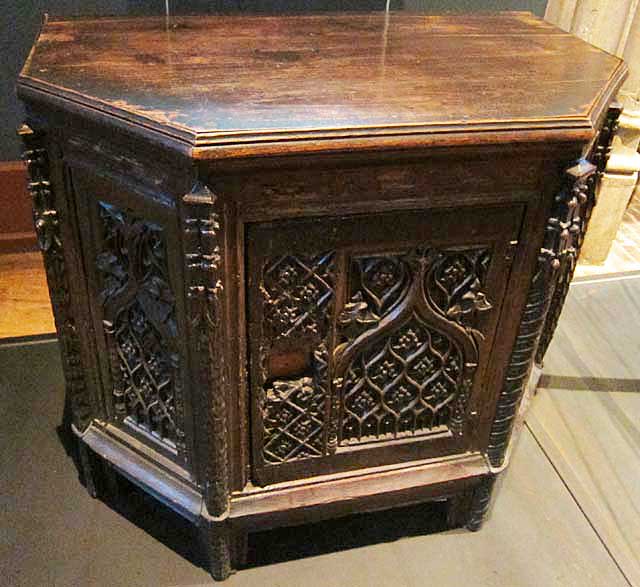 Similar to the Cluny cabinet, our cabinet has as its focal point (on the door panel) an ogee or S-shaped arch whose gentle curve is a hallmark of Flamboyant Gothic. Inching up the curved sides of the arch, like tiny caterpillars, are elements of "crocketing" or curled acanthus leaves used to ornament arches and spires in Gothic architecture. Surrounding the arch on the upper part are groups of lancet arches in graduated sizes and whose tops intersect a rounded arch that acts as the overall outline for the tracery on the door. Supporting the ogee arch is a row of lancet arches. For more about the eminently versatile lancet arch, see the section on Gothic in Stylistic Origins.

In typical Flamboyant style, the top point of the arch extends into an elaborate figure resembling a fleur-de-lys or the flame (flambe in old French) that lent its name to the Flamboyant style.

Within the widest portion of the ogee arch is a quatrefoil within a circle and having a square-shaped blossom at its center. This combination of elements proved a popular motif in the 19th century revival by furniture makers whose inspiration was Gothic architecture. For another example, see Bench 5301.

Above the door panel on the front of the cabinet is a single drawer.

The central part of the drawer is comprised of an elliptical shape extending outward from the drawer-pull. Within that overall shape are two rows of mouchettes. (For more about shapes such as mouchettes, soufflets, and other tracery designs, see the illustrations in the section on Gothic in Stylistic Origins). At each end of the drawer is a trefoil or triangular-shaped figure. Separating the ellipse from the trefoils are half-blossoms — a sort of decorative "space filler" used elsewhere on this cabinet (including between the top of the curved arch on the door and the corners of the rectangular panel).

A variation on the Flamboyant Gothic theme of the door panel is found on the tall tracery panels, two on each of the angled side sections, of this cabinet.

A quatrefoil contained within a soufflet sits atop a pointed arch separated by half-blossoms dividing the top section from the lower section of each tall, slim panel.

In these instances, the quatrefoil does not have four equal, rounded lobes. Rather, it is contained within the shape of a soufflet, resembling the bellows from which the term is derived in French. The top lobe of the quatrefoil tapers to a point whereas the other three are rounded. All of this directs the eye upward where the curves of the soufflet also act as an ogee arch topped by an ornament similar to that on the door of the cabinet. Surrounding this upper part of the panel is a rounded arch containing another arch that is ornamented with cusps.

The lower parts of these side panels involve a very unusual treatment of lancet arches in which a pair of shorter arches is contained in the lower sections of two taller arches. Each lancet arch is outlined by a pointed arch. These all comprise the bottom part of a larger, pointed arch spanning the width of this lower portion of the tracery panel. In the top part of the pointed arch is a pair of elliptical figures called mouchettes framing, along with the lancet arches, a blossom motif similar to ones in the middle of the quatrefoils.

At the top of the sides are ellipses containing hexafoils or six-lobed figures.

At the center of each hexafoil is a blossom within a diamond-shaped figure. As with the other shapes of tracery found on this cabinet, the background is stippled. This is evidence of great care and knowledge on the part of the cabinet-maker, who is conscious that the stippling will help accentuate the beauty of the tracery that it frames.

As mentioned above, another Gothic element that is prominent on this cabinet is the column (pilaster) with a spire at the top, acting as a vertical framework on both sides of the front — just as it does on the cabinet in the Cluny. The spires remind us of the origins of Gothic Revival style in architecture of the Middle Ages and of Viollet-le-Duc's magnificent flèche atop Notre Dame de Paris, destroyed in the fire of April 15, 2019.

The spire has typical crocketing in the form of curled acanthus leaves on either side. Just below the spire are angled niches with pointed tops and containing lancet arches.

In terms of overall condition, this cabinet bears few ravages of time. Its ornamentation is intact and the oak delivers the rich patina of age. A split is shown in the photos, above, on one of the lancet arches at the base of a side panel. It does not affect stability or use of the cabinet as a versatile piece of antique furniture. a repair is visible at the back section on the left side where moulding has been replaced.

We do not often see small cabinets with elaborate Gothic fenestrage such as this one. Therefore, it is ideal for almost any room in a home, adding a rich Gothic flavor wherever it resides. It could be placed between chairs such as 5213, whose rich array of Flamboyant Gothic elements complements those of the cabinet.