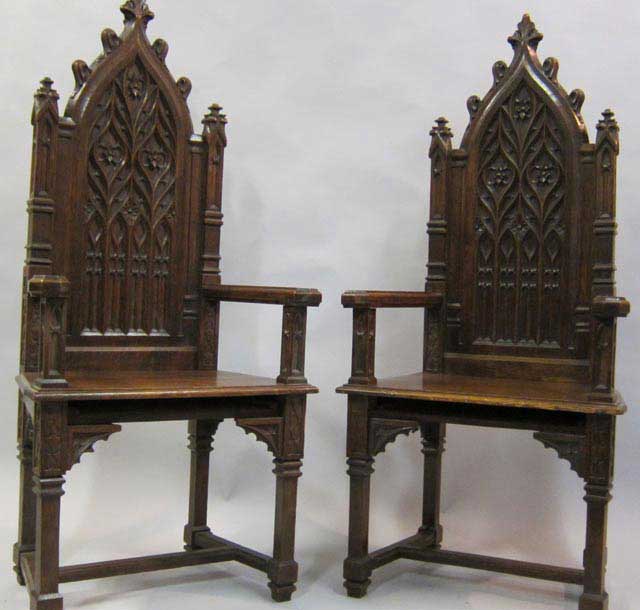 This pair of matching Gothic chairs with their perpendicular design are like a Gothic cathedral made manifest as seating. The back panels of the chairs are in the shape of a Gothic ogee (ogive) arch, a pointed arch with a slight curve on either side and topped with a flourish in the form of a stylized fleur-de-lys.

Ornamenting the angled sides of the arches is crocketing, small figures in the form of tightly curled acanthus leaves.

When analyzing stylistic elements such as the upper portion of the chair back, it is best to start from the largest shape and admire, successively, the shapes contained within.

The fenestrage or tracery design of the backs is based on elements seen in Gothic cathedrals where the lowest level of the composition is a row of four tall, slim arches, each of which is subdivided further into two arches below the elliptical shapes within the main arches. The upper portion of the back is based upon elliptical shapes within elliptical shapes, best thought of as two ogee (ogive) arches (pointed arches but with a gentle curve) joined at their bases when one is upright and the other has been inverted. Within them are mouchettes or smaller elliptical shapes, with lobes, to fill conveniently the spaces between the larger ellipses. At the center of the concentric shapes is a quatrefoil or four-lobed figure which is also elongated to a point at the top and bottom.

The rich vocabulary of Gothic design, manifested in these armchairs, originated in the 12th and 13th centuries when Gothic style swept across northern France into town after town seeking to outdo its rival with a taller and larger cathedral. As mentioned in the book about Notre Dame de Paris (see References, below), the new style was called opus francigenum or "French work" back then. It was not referred to as "Gothic" until some centuries later.

With their faithful representation of elements of Gothic architecture, these chairs reflect the 19th century passion for Gothic style beyond architecture, including literature, painting, and furniture. This more recent passion for Gothic was sparked by a 19th century renovation of the Cathedral of Notre Dame de Paris and the movement to preserve and appreciate other buildings from centuries past. For more about this, including the role of novelist Victor Hugo and his love of Gothic design, see our page on Stylistic Origins.

Lancet arches and finials are used beautifully here and emphasize the relationship to architecture. Lancet arches ornament the post below the armrest and the vertical that runs along the outer edges of the back above where it joins the armrest. Atop this vertical is a classic four-sided, pointed figure leading to a finial, as one would expect to see on the roofs of Gothic cathedrals.

The bases of these chairs are also rich in Gothic details, showing that whoever made them was cutting no corners on areas of the chairs less likely to be viewed and admired. For example, the corner pieces or spandrels uniting the base of the seat and the legs includes a triangle shape enclosing tracery and ornamented with a downward facing finial copying the stylized fleur-de-lys at the top of the chair.

Running the width of the front and just below the seat is an open area, handy for storing books about Gothic furniture while enjoying these chairs.

In keeping with the Gothic love or ornament and compulsion to leave no space unadorned, the sides of these chairs are also richly carved in motifs mimicking those on the front.

The most representative color, given the challenges of photographing dark furniture, is in the image at the top of this page. Additional photos are included, below.

Perhaps because of the richness of the Gothic ornamentation, these chairs invite admiration rather than seating. Moreover, their adherence to the perpendicular aspects of Gothic design mean that their backs are not slanted for comfort. In this sense, they may be better suited for an entryway, rather than a dining room. For example, they could be placed on either side of Gothic Dressoir 5203 or Small Gothic Table 5209 so that their elliptical tracery would blend beautifully with that of these other items.