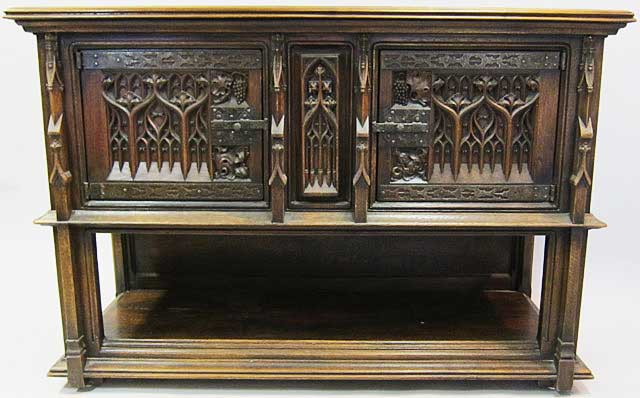 This cabinet is not as tall as the typical French Gothic style dressoir, but it is just as wide and still chock full of luscious elements of fenestrage or tracery. Sprinkled throughout are references to grapes, including vines, bunches, and leaves.

As we have noted in describing other examples, the dressoir is one of the oldest types of furniture developed in France. Its use dating back to medieval times as life became more permanent in towns and villages, it began as a chest placed on top of a table. As a result, the open pot board remains at the bottom while the upper portion became a case for storage. Typically, the items stored were the textiles used to cover tables and chairs. These hand-made items were far more prestigious and valuable than the furniture to which they related, and so they were locked away and preserved as precious investments for use on special occasions. By the 19th century, textiles were mass-produced in factories and were no longer more valuable than their storage containers, causing locks to be omitted from hardware on dressoirs such as this one.

The front of a dressoir proved the ideal setting for ornamentation and for expressing the endless creativity of craftsmen sculpting elements derived from Gothic architecture. The design for the wide doors of this cabinet includes a central ogive arch with a partial arch on each side, all surrounding multiple lancet arches that are tall, slim, and populate the bottom portion of the ogive arches. Above the lancet arches are multi-lobed shapes, such as the elliptical mouchette and the elongated soufflet, filling in spaces. Topping the central ogive arch along with the partial arches on either side, and proclaiming the flamboyant Gothic style, is the flame shape interpreted as the tip of an acanthus leaf rather than the more typical fleur-de-lys. Beyond their use in the lower part of ogive arches, lancet arches appear again in the space between the top of the main arch and the partial arch on either side of it. At the low point, where the main arches separate, are the tips of acanthus leaves identical to those that topped the main arches.

Above the latches on both doors is an arrangement executed in virtuosic carving and providing the main grape theme. It consists of a sprig ending with a cluster of grapes adjoining a grape leaf whose stem is wound around the sprig. Below the latch on the left door are beautifully carved acanthus leaves unfurling from a cluster. In the same spot on the right door is what we have speculated to be a pomegranate spouting or sprouting its seeds. All this vegetation combines to provide the sculpted equivalent in oak of a still life painting. While reviled or belittled as an academic exercise for an artist to display his technical chops at depicting detail, texture, and moisture, the still life as a genre of painting remains remarkable and well worth appreciating. In a similar sense, the highly skilled depiction of fruits and leaves in the carving of this cabinet — especially in a material as unyielding as oak — honor the genre while providing thematic material uniting the elements of the cabinet's overall design.

We can think of only one other dressoir in our collection that has included grapes among the carved elements. Item 9204, one of the first items we ever offered, had attracted us due to the exuberance of grape clusters and vines completely filling the surface area on both doors.

Not to stray too far away from the Gothic architectural elements that characterize dressoirs, the designer of this cabinet included an arch design in tracery for the narrow panel between the two doors. The graceful ogive arch sits within a larger pointed arch. It has an elongated central spire culminating in the tip of an acanthus leaf identical to those punctuating the arches on the cabinet's doors. Leaves of the same size appear as oversized crocketing on the sides of the spires. Dividing this central panel from the doors, as well as at the outer corners of the cabinet, are tall spires made up of two distinct levels.

In overall color, the cabinet is a dark brown with lighter highlights. This color would have been chosen in accordance with the mistaken belief of 19th century designers that medieval furniture was invariably dark — and so later reinterpretations should be as well. The patina is rich, especially on the top, the pot board, and on the subtle pattern of linenfold or plis-de-serviette figures comprising the sides of the upper part of the cabinet.

With the references to grapes, it is tempting to speculate that this piece was commissioned by a vintner or a lover of fine wines to telegraph his passion to everyone who beheld this beautiful cabinet. That we sourced it in a region of central France not far from Burgundy sparks further speculation of a close connection to growing grapes and making fine wines.

Because of the emphasis on grapes, this cabinet would be ideal for a wine cellar or any area in a home where wine is served and enjoyed. Since the height is around 20 inches lower than the typical dressoir, it would be a convenient platform for tasting wines while showing off the magnificent patina of the solid oak top. The interior of the cabinet offers an ideal space for storing glasses and decanters. Unlike most dressoirs, there are no drawers below the case for storing corkscrews and other implements. However, this problem could be solved by using another wine-themed item, the large oak box that is Item 9460 or armoire Item 5205.