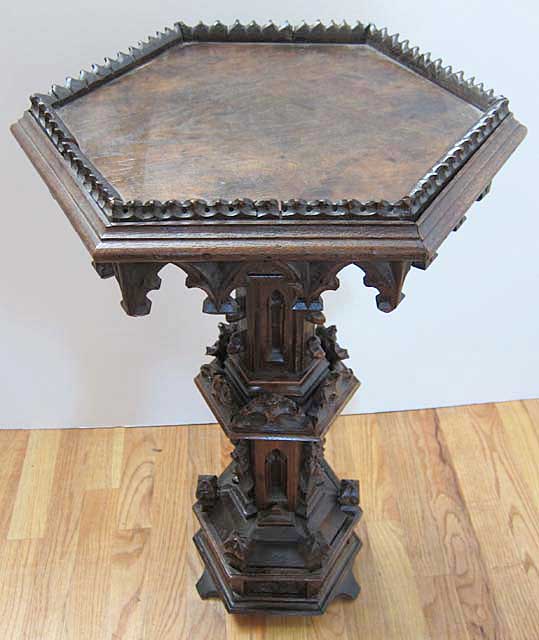 The term guéridon refers to a small table, usually having a central column or pedestal, with a round platform (in wood or glass) attached to function as the table’s top. Treasured for the last 200 years as a typical French occasional table or end table, the guéridon is the perfect ground for variations on a theme involving Gothic stylistic elements.

It should not be confused with gueridon service referring to the practice of finishing items at the diner’s table in a restaurant, for example, flaming crêpes suzette. Perhaps the most ambitious example is caneton de Rouen à la presse, where a heavy metal press is used to squeeze blood and bone marrow from the carcass for a sauce to be served over roasted duck breast heated table-side. A typical guéridon table would not have been suited for such a grandiose production since the central column design does not lend itself to the exertions required by the duck press.

We have offered guéridon tables in the past but in Renaissance Revival style, never Gothic. This one is a virtuoso example of Gothic elements from top to bottom. Uniting it all is a four-sided column divided into upper and lower parts. It reminds us of the bell towers at the western end of Gothic cathedrals, such as Notre Dame de Paris, with suitable niches and outcroppings for a Quasimodo to scale.

As we know from contemporary accounts of Quasimodo’s creator, Victor Hugo’s enthusiasm for Notre Dame de Paris (the title in French for what we know as the Hunchback of Notre Dame) is linked directly to his and the population’s passion for Gothic style amidst renovations of the cathedral and other medieval buildings by Eugène Viollet-le-Duc. Throughout the middle and late 19th century there was a fascination with all things Gothic and a hunger to recreate the style in furniture. Anyone with enough francs to afford a piece of furniture, such as this table, could enjoy in his or her home a memento of the artistry and faith represented by a Gothic cathedral.

While the table does not strictly have a front and back, we are treating as front or back of the table the sides into which a lancet arch is carved, forming a tiny niche. Ornamenting the four vertical segments of the column are intricately carved “crockets” or curled acanthus leaves. Such crockets abound in Gothic style architecture, especially on the outlines of arches and the sides of finials, ornamenting the basic lines from top to bottom while providing attractive stops where the viewer’s eyes can linger and enjoy.

Dividing the top and bottom parts of the column is a hexagonal outcropping that echoes the hexagonal shape of the top and base of the table. Reminding us of a convenient ledge for pausing on a climb up a Gothic tower, the acanthus leaf is the dominant ornament. The tip of a leaf is spread and acts as the outer edge for the outcropping, attracting the viewer’s attention to the ingenious design.

Lending stability to the table is the solid base in the shape of a tall three-dimensional hexagon. Each face of the hexagon includes a rectangle containing fenestrage or tracery design consisting of a tapered quatrefoil inside an oval. At the top of this base, where the sides of the hexagon intersect one another, are short toupies capped by a chubby design evoking a three-dimensional fleur-de-lys.

The top of this table is a crowning achievement. Hexagonal in shape, rather than the circular top typically capping a guéridon, each of the six sides of the top contains three bays of suspended, open tracery resembling the tops of arches. These remind us of the porch of a Gothic cathedral where elaborately carved canopies shelter statues of tall, slim saints, prophets, and rulers lined up on either side of doors. It is as if the table were meant to remind us of the column of stone out of which each figure is meant to appear transformed. 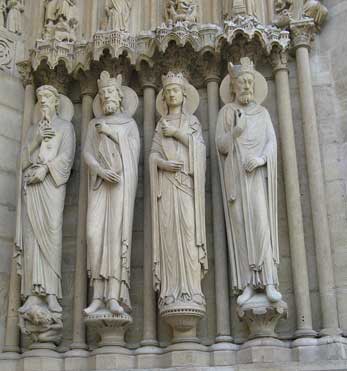 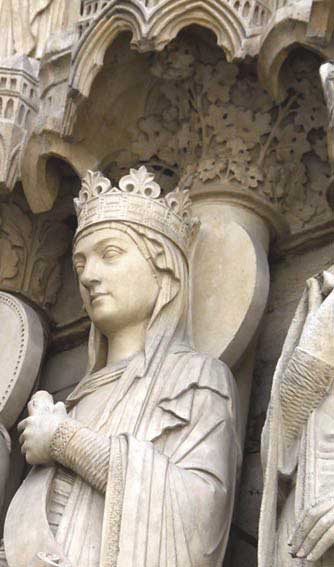 That the top is divided into sets of three arches also reminds us of the importance of numbers as symbols in medieval times to reinforce a liturgical meaning. As we know from accounts of composers Leonin and Perotin and their innovations conceived at Notre Dame de Paris, numbers and their relationships were key in architecture and art but especially in music where notes measured the passing of time (in addition to the relative pitch). Notes and phrases divisible by three took on a sacred meaning linked to the Trinity while those based on two were deemed inferior. Here the central column has four sides but the all-important top is based on the hexagon (itself divisible by both three and two) ornamented on each side by the three carved arches affirming the superiority of the number three.

Surrounding the top is an undulating border that is in keeping with the overall style while acting as a guardrail to prevent anything placed atop the table from sliding over the side.

Taking all these elements into account, we remain in awe of the creativity of this table’s designer. A love for and knowledge of Gothic elements, along with a desire to link his table to the style of the great cathedrals, must have been motivating factors in fashioning this triumph of Gothic design.

In order to admire this table from all sides, we suggest that it take center stage in an entryway or foyer.