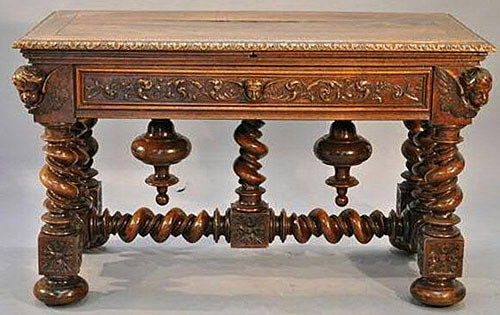 This table took our breath away when we first encountered it. The magnificent overall design, the spectacular carving, the rich patina of the walnut, all combine to make this the ne plus ultra of 19th century re-evocation of French Renaissance style.

In overall structure, it owes its design to a 17th century look perfected in the Loire Valley during the reign of Louis XIII. A small, oblong table made of walnut, its base would have been comprised of legs at four corners united by an H-shaped stretcher and by one or two legs joining the stretcher and the top. The legs would all have been torsades, those massive and elaborate double spirals (what the British call barley twists), alternating broad and narrow widths, while symbolizing not only eternal life but also a master carver's accomplishments. Heavy, four-sided blocks would have united the legs with the "H" elements of the stretcher. Multiple pendentives would have been suspended from a crossbar under the table, elongated but not far enough to reach the stretcher. Supporting it all would have been bun feet. Disguised within the frieze below the top, a single drawer, spanning the length of the table, would have been inserted.

If we stopped right here with our description, a glorious example of Renaissance craftsmanship would be evoked, such as the otherwise unadorned table, sold at auction for FF190,000 (approximately US$32,000) in 1991 from the Perrier Collection of Haute Epoque furniture.

Our table takes just such a basic object and elaborates on it to become its own distinctive work of art. The highlight is the set of four magnificently sculpted angelots (cherubs) at the corners of the top. The cherubim are especially enchanting, their heads slightly angled and hair wind-swept, as if they are in the act of turning to greet us. The detail of the carving, including the chubby smoothness of the faces, the wispiness of the hair, the slightly pouty mouths, and the intricacy of their wings, all evoke an Italian master such as Rosso Fiorentino or Bernini.

Another, smaller angelot, with a more stern visage, does double duty as a drawer-pull set amidst a frieze of grotesque decoration. Since our most recent trip to Rome, we have become fascinated with grotesque decoration discovered by Raphael and his cohorts in the underground remains (grotto) of Nero's Domus Aurea. Within a short period, it was turning up everywhere as standard ornamental motifs involving acanthus leaves and other vegetation in long flourishes, volutes, strap-work, and with the addition of masques and candelabra, all depicted within rectangular panels. Here, the vocabulary is limited to vegetation, but depicted in swirls and sweeping curves of various widths and sizes.

Flower motifs adorn the blocks uniting the legs with the stretchers and dividing the stretcher in two below the central leg. This too is standard ornament traceable to Nero's house, having a small central bud and long leaves pointing out to the corners of the square.

The pendentives or toupies suspended from the top are unusually wide, which may account for there being only two instead of the more traditional four. Magnificently rounded and balanced, they are masterpieces of the furniture-maker's skill.

If we stopped right here, the table would be sufficient as a triumph of 19th century reinterpretation of French design from the period known as the Second Renaissance. But there's more. The top of the table lifts up and stays perpendicular. Hinged supports, disguised as volutes, pull outward from the sides so that additional panels can fold out and sit upon them. Research has not yielded answers as to the uses for which these extensions were designed. We could not term this a worktable, since it is far too beautiful for drafting or designing. Nor does it lend itself to dining, since it is too narrow and could be awkward with the top up. Perhaps it was designed as a way to hide important papers in plain sight by secreting them between the levels of the top? Whatever the objective, the extension design remains an enigma and part of the charm of this remarkable piece.

This table deserves to be the center of attention and could serve as a library table or occasional table in almost any room. Due to the way in which the top folds out, it could be ideal for placing behind a sofa and using as a platform for a makeshift buffet.