Pining for Porcini after a Roman Holiday

Each time we visit Rome, the more captivated we are by this city of contrasts. There is the obvious juxtaposition of ancient and modern – the sleek buses parked by the Coliseum, the contemporary office buildings grafted onto antique foundations, the impersonators of Roman centurions posing for pictures with tourists. What strikes us most, however, are the contrasts of urban versus rural and of public versus private. These themes percolate just below the figurative surface of the Eternal City and bubbled up at the eateries we visited.

The small town feeling first became evident on an earlier visit to the city when we lodged at the Hotel Villa San Pio on the Aventine Hill. Having picked this residential neighborhood with several boutique hotels (and absolutely no restaurants) meant we were spared the roar of motorbikes as we awakened each morning to birds singing in the pine trees outside our windows. A short walk farther up the hill from the hotel was the fifth century Church of Santa Sabina with the austere design of a village sanctuary and a faith emergent. We wandered through the garden of orange trees next door to it, from whose edge we glimpsed the distant dome of Saint Peter’s Basilica, projecting to the world an urban church triumphant.

We got plenty of exercise striding down the Aventine Hill each morning to the Marmorata tram stop and then back up the Hill each evening after a day of sightseeing. In case we needed fortification for our climb, there was always Gastronomia Volpetti, the renowned purveyor of cheeses, olives, cured meats, wines, and gourmet prepared meals channeling the empire’s agricultural heritage. Next door was Pasticceria Barberini, a magnet for pastry lovers like my husband, Michael. 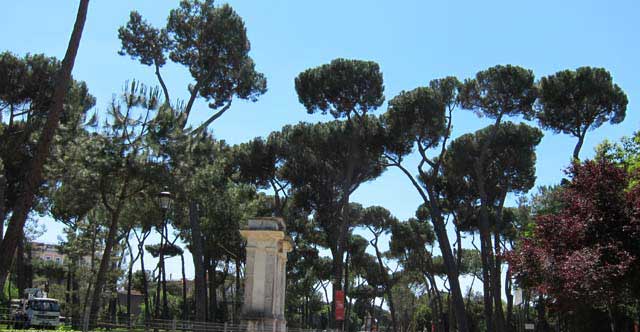 The schedule of early morning meetings on our trip to Rome this past May meant that staying in our urban oasis was out of the question, but we still longed to recapture the bucolic sensations of the earlier sojourn. A Sunday morning the day before our departure, with Michael battling the sniffles, compelled a restful hour or so on a bench in the expansive Gardens of the Villa Borghese. Like urban parks in America, it was filled with families strolling, playing games, picnicking, sunbathing, and enjoying a patch of green away from nearby apartments.

For us, the treat was sitting amidst the tall umbrella pines that make this park so memorable and inspired the first movement of Ottorino Respighi’s 1924 orchestral tone poem, The Pines of Rome. Their soaring height and powder-puff-shaped canopies are exotic and intriguing; so different from the pine trees of our neighborhood in The Woodlands. The sunshine shimmering through their branches, the dappled light and shadow playing on the ground, all are evoked in Respighi’s music as it shifts from a boisterous mood of youngsters at play to a hushed flute solo eliciting a timeless, pastoral setting. Although his repertoire did not include Respighi, the accordion player some 50 yards down the way pulled at our heart strings as he cycled through a classical hit parade from Vivaldi’s Four Seasons to Mozart’s A Little Night Music.

Hunger pangs eventually led us to depart and to stroll down the Via Veneto into the heart of urban Rome. We passed many tony restaurants with their extensions of glass-enclosed seating areas on the sidewalk. Nothing tempted us. 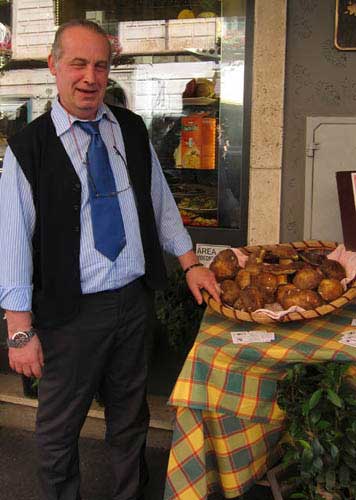 A turn from Piazza Barberini onto Via Sistina led us to Antonio and the Ristorante Leon D’Oro. Antonio was poised out front next to a table supporting a basket brimming with porcini mushrooms. He had either figured us for a couple of famished tourists or foodies in search of a taste of porcinis. Either way, a chat with Antonio (whose English was superb), the promise of the mushrooms and of pasta made fresh that morning by his wife, all proved irresistible. As we learned from him, the Italian porcini season was still a few months off. The mushrooms on which we would feast had come from an erstwhile and remote part of the Roman Empire – Turkey.

Mushrooms are nothing new to the Romans, occasionally portraying the murder weapon of choice in a drama of regime change. At least that’s the story about how Nero became Emperor after plotting with his mother, Agrippina, to murder her husband (Nero’s stepfather), Claudius, with a dish of lethal fungus. Patricide and intrigue aside, we opted for a plate of sautéed porcini on a bed of arugula. A creation of young and passionate Chef Matteo Alba, the dish was so simple yet utterly delicious. The mushroom slices were meaty with just the slightest hint of crustiness, the arugula crisp and peppery (unlike the "baby" version on offer at our local supermarkets), with just a scant trace of olive oil. The kitchen, being located just a few feet from our table, meant that the lingering aroma of the sautéing mushrooms was still wafting around us as we bit into the first succulent morsels. We were in porcini heaven, enlivened by a Sangiovese from Tuscany — Podere del Giuggiolo Corte alla Flora (2009).

After a main course of tortellini in cream sauce with mushrooms, for me, and a tender and flavorful Danish steak in green peppercorn sauce, for Michael, we passed on dessert and bade Antonio a fond farewell. Earlier, Michael had spied a gelateria just up the street. Our meal was topped off by another example of this incorporable Italian version of ice cream ̶ diminutive balls of extra-dark chocolate or hazelnut, packed with intense flavor, and a rich cream flavor notable for the absence of vanilla. 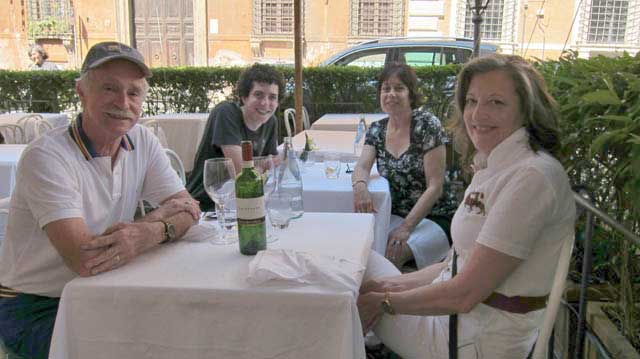 The more formal, public meal we enjoyed was at Vecchia Roma (Old Rome), discovered while wandering the former Ghetto after hiking up to the Campidoglio from the Forum. Its tables, spread out in the tiny piazza and covered by broad umbrellas, made the location ideal for a leisurely lunch starting off with fritto misto, a plate of delicately battered and fried scallops, cod, zucchini, red pepper, and cauliflower. Always on the look-out for organ meats, I had as my main course veal kidneys in a sauce of pan drippings with a dash of cream while Michael had veal liver, pan-sautéed to perfection with a similar, but lighter, sauce. Accompanying this was Arnoldo Caprai’s Rosso di Montefalco (2009) which we had learned to love the week before in Perugia. We lingered for several hours, enjoying the cool breezes on this sweltering afternoon along with the wonderful wine, while talking to the folks at the next table, Americans who happened to be from our former neighborhood in Los Angeles and for whom this restaurant was a priority destination. Stumbling upon it, for us, was serendipitous but equally memorable.

The culinary delights of a more private Rome were consumed with gusto at Trattoria dal Cavalier Gino on a tiny street near the Parliament. Our friends, Andrea and Fabiana, Romans through and through, were determined to introduce us to the hearty Roman delicacies they love but that do not generally grace restaurant menus because mothers (or more likely, grandmothers) make them at home. We loved the lively atmosphere at the trattoria. There were just a few tables, close together, full of friends sharing a meal and a carafe of the house white wine. 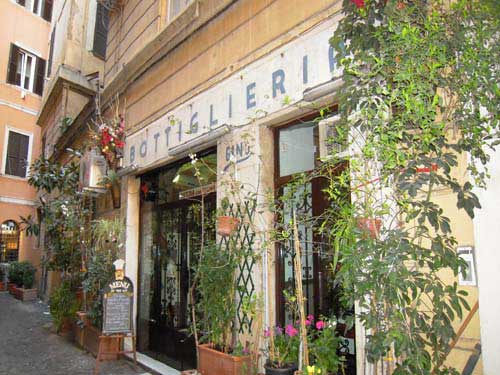 A revelation was the traditional Roman pasta dish known as Cacio e Pepe. Thick spaghetti is cooked first, al dente. Olive oil and cracked black pepper are heated in a skillet. Some pasta water is ladled in and brought to a boil. Then the pasta is added and generous amounts of Pecorino Romano and Cacio de Roma cheeses are sprinkled in until a creamy concoction results. While I subsequently tried to duplicate this simple dish at home, my efforts cannot compete with the perfect consistency and delicious marriage of the tangy sheep’s milk cheese and the fresh, spicy pepper at Gino’s. There’s something about fresh pasta, consumed in Italy with locally made chesses, that tastes like nowhere else. Michael and I split a plate of Cacio e Pepe, but I would have gladly eaten the whole thing myself, but for the need to save room for the next course.

We followed Andrea’s suggestions for what to eat next from the array of tempting, elemental dishes. I opted for oxtail stew, a dish dating back to the time when oxen were still used on nearby farms to plow the fields. It proved a lushly flavored, slightly spicy dish, the meat slow-cooked and tender in a sauce of red wine and tomato. Michael had rabbit, Andrea had tripe, and Fabiana had a veal dish. The only two with room left for dessert, Michael and Fabiana opted for Tiramisu in a superb, creamy, and perfumed version unknown to us in the U.S.

Dire warnings about the collapse of the Euro, concerns about the viability of the Italian economy, scandals at the Vatican, and other alarming headlines assailed us throughout our stay. But nothing could dampen the enthusiasm we feel for the sweet life of contrasts that make Rome eternally special.

The original version of this article appeared in the Fall, 2012 edition of the Quarterly Newsletter of the Wine Society of Texas, a non-profit organization dedicated to wine education and appreciation.