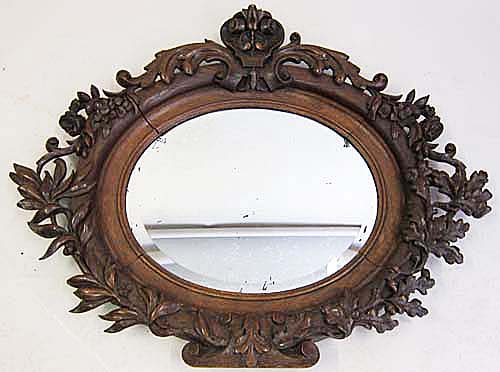 This mirror is a gem of the forest and a bit of an enigma when it comes to depicting the leaves of various trees and plants found in Europe. It is intricately carved and, has lost some small bits over the centuries, but the exuberance of design makes omission hard to spot amidst the masterful carving and minutest of details. Owing to its age, there are also some splits in the wood, which is not uncommon for curved articles such as this solid wood mirror.

We believe that the glass is not original because it is beveled, a characteristic of late 19th century and 20th century mirrors. It may be that the original glass had lost its silvering or was broken, but the replacement is pleasing despite some loss of silvering.

Overall, we might describe the mirror as Renaissance or possibly even Baroque in style, given the exuberance of the decorative elements, but it also has some elements that remind us of the output of Black Forest workshops (minus the bears!) and such philosophical yearnings from the 19th century as interaction with the countryside and a desire to bring nature indoors.

The oval shape, we believe, is designed to immediately draw the viewer's attention to the heraldic symbolism reminiscent of the wreath shape used since ancient Greece to denote special status for athletes, warriors, and even brides.

Starting at the center top and working counter-clockwise (as the series of photos do, below), we begin with the top, central part of the mirror. We emphasize that the decorative elements are carved from the frame itself and are not appliqués or pieces carved separately and then fixed to the frame. This makes the design and the virtuosity of the carving even more remarkable and meriting close examination.

The central scroll or escutcheon is topped by what visitors to the New Jersey seashore would recognize as an upturned horseshoe crab! Figuring that these were unknown to 19th French craftsmen, it is more likely another symbol from the animal kingdom associated either with the place where the mirror was made or perhaps the person who commissioned it.

On either side of the escutcheon are large, gracefully arching acanthus leaves - that staple of furniture design from the Florentine Renaissance onward and based on plants still plentiful in the Italian countryside.

On either side of the acanthus leaves are similar, but not identical, clusters of blossoms and buds in a tangle of leaves. The largest, open blossom resembles the Union Rose used in the United Kingdom coat-of-arms (see Item 3217). Some of the flowers resemble daisies or possibly poppies.

From this cluster on the left side and moving counter-clockwise, the next set of vegetation involves olive branches, leaves, and olives. In heraldry, the olive is associated with a number of concepts, the most renowned is likely peace. The olive tree is a symbol of fecundity owing to the large numbers of olives produced, and so brides of ancient Greece wore garlands of olive leaves to start their married lives. The carved olives on this mirror are particularly small and intricately carved, almost shriveled in how they are depicted. The symbolism may have been known only to the mirror's owner and carver (perhaps the same person).

The central part of the base, resembling a pedestal, incorporates all three main leaves of the mirror's design - a small acanthus leaf in the center, an olive leaf on the left, and an oak leaf on the right.

Continuing on, counter clock-wise from the pedestal, the oak portion of the mirror begins. As a symbol, the oak tree signifies strength and endurance (typically the last tree in our yard to shed its leaves in winter) as well as victory and military might. The rendering of the oak leaves with acorns apparently evokes eternity. These are the most richly detailed of the carved flora on this mirror and a delight to behold.

It is interesting to note that the heraldic elements of olive leaves on the left and oak leaves on the right are ancient, but have found their way into a number of 20th century symbols of France, including the coat-of-arms of the French Republic created in 1953 and still gracing the covers of French passports. These symbols were also associated with Napoleon in various official portraits of him.

When it arrived here, the glass was moving around in the frame, but has been stabilized. There have also been repairs to some of the leaves, including stabilizing them. This mirror must be handled with care and crated for shipment to its new home.

Owing to its compact size, this mirror is ideal for a number of locations, provided that those who see their reflection in it can also approach and admire the beauty of the carving, up close and personal.