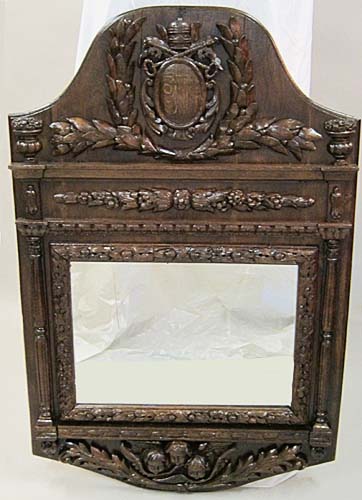 When all eyes were on the Vatican for the election of Pope Francis, we thought it the perfect time to find this magnificent mirror whose decorative focus is the coat-of-arms of the Holy See. Anyone who has ever visited Rome will recall seeing the image of the three-tiered papal crown or tiara above a crossed set of keys, heraldic elements dating back to medieval times tying the papacy to St. Peter and the basilica built on the site of his martyrdom.

The rendering of the coat of arms on this mirror is notable for the unornamented oval on which the tiara rests, meaning that the mirror is not associated with any specific pope whose individual heraldic elements would be found in this space. Perhaps the carver made it “on spec” and was hoping to present it to a future pontiff with that individual’s heraldic elements included? In any event, we can consider it a Renaissance Revival object and not one stemming from the 16th century since the decorative elements were not carved out of the frame, as would have been the case in earlier times, but rather shaped separately and affixed to the frame as with 19th century furniture construction techniques.

Overall, the decorative style is a banquet of Renaissance motifs from architecture and paintings but ultimately rooted in ancient, pagan Rome. On either side of the silvered glass are fluted pilasters topped by stylized Corinthian columns atop each of which a vase of flowers is carved. A laurel wreath surrounds the papal coat-of-arms in a salute to the ancient Roman practice of crowning victorious military commanders with a crown woven of laurel leaves. Separating the top of the mirror from the frame enclosing the glass is a horizontal motif based on the garlands of leaves and blossoms adorning architecture from Roman times and beloved by such Italian Renaissance painters as Pinturicchio and Crivelli as well as the ceramic designers of Urbino and Deruta. A similar yet narrower motif borders the glass itself.

While the coat-of-arms commands attention at the top of the mirror, this is balanced at the bottom by a grouping of three cherubim or angels’ heads with wings attached. Particularly masterful is the manner in which the wings of the lower two angels overlap and frame their faces in dramatic relief. The angels’ expressions are charming, their mouths slightly open as if about to proclaim something – perhaps the name of a newly elected pope?

This mirror would be striking in a place of its own or over a Renaissance cabinet such as Item 4157, also rich in symbolism and featuring cherubim.