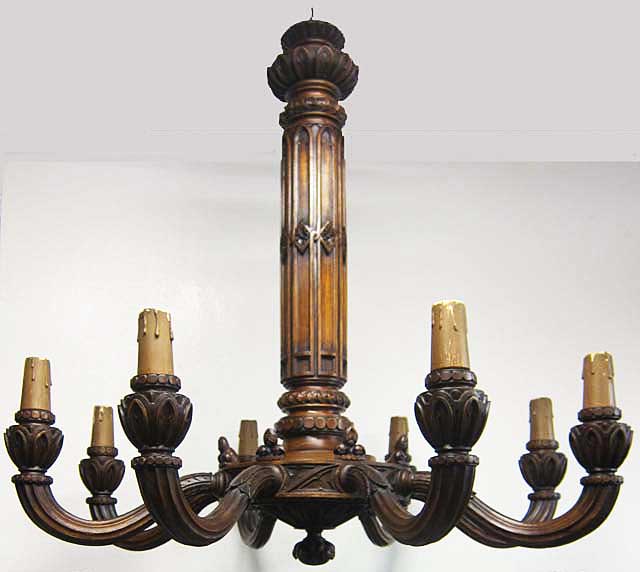 The last place that anyone should hang this magnificent chandelier is high off the ground where its exquisite carving and abundant Gothic details would be hard to appreciate. Hanging over a table, at a lower height just above the diners' heads, would be the ideal spot for enlightening conversations while savoring a scrumptious repast.

It was in just such a setting that we discovered this chandelier and purchased it as part of a larger group of Gothic Revival furniture that had graced a home in southwestern France for generations. Although this chandelier was the smallest of the items, it is perhaps the most exuberant among them in terms of the richness of Gothic and other decorative motifs and their roots in medieval art and architecture.

In overall shape it is as wide as it is tall, a full 34 inches. Eight gracefully curved arms, with an imitation candle at the end to hold each lamp, extend outward from the base of the central column. Since arriving here from France the chandelier has been modified and rewired for the US 110VAC electrical system. The lamps it uses have the widely available E12 candelabra base.

Nowhere in sight are the dragons, griffins, and birds found on pine chandeliers painted to look like walnut and described as "spooky" by antique dealers in Europe looking to attract American customers with a taste for Gothic. Our fixture is unabashedly French Gothic Revival in the sense of an earnest dedication to stylistic elements combined in a functional piece of art adapted for modern uses and inviting admiration.

Fundamental to this fixture is the central column. The main portion has eight lancet arches arrayed in a circle, harmonizing with the eight arms. For more about lancet arches, see the discussion of Gothic in Stylistic Origins. Above and below it are layers of ornamentation.

On this chandelier, lancet arches are found in several locations. Most striking are the elegantly tall and slim versions on the central column.

It is unusual to find ornamentation on a lancet arch itself, but small diamond-shaped figures frame intricately carved blossoms connected as if in a daisy chain.

At the top of the central column is a wider section flaring out from the center and ornamented with lancet arches contained within pointed arches that spread outward and upward like petals or leaves.

This same motif of lancet arches within pointed arches is seen on the base of the fixture when looking up at it from below, where it forms one of several concentric circles radiating outward from the center.

At the center of the base is a poignée or a sort of downward-pointing knob or handle that is carved to resemble vegetation.

After much research, we have concluded that this vegetation-themed knob is not meant to recreate any existing fruit or legume but rather is a fantastic ornament based on the pomegranate. What leads us to this are the channels of seeds represented on the knob and which evoke the interior of the orb-shaped fruit.

The pomegranate has been, since ancient times, a symbol of fertility and abundance as well as a popular subject for artists, especially for inclusion in still life paintings where the open pomegranate with plentiful seeds offers up interesting details inviting virtuosic treatment. 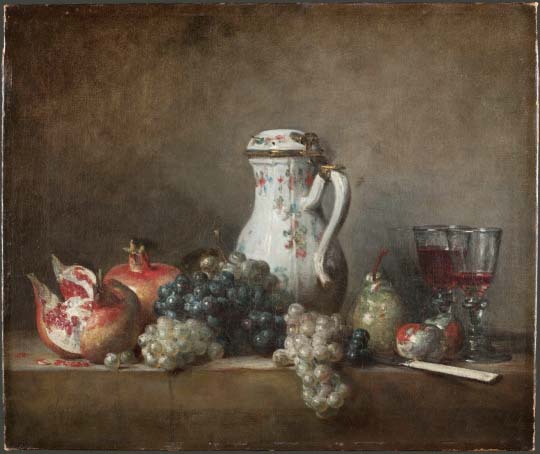 In French the word for pomegranate, grenade, gave rise to the term for the armament that was initially round but has always been filled with copious seed-like shrapnel. We prefer the earlier more peaceful symbolic connection, sparked by the abundant amount of seeds, to fertility and a bounteous harvest as the theme for sumptuous meals at a table illuminated by a fixture with a pomegranate theme.

The exterior of the knob is where the conundrum arises since the pomegranate is not covered in leaves. The outer leaves depicted on the chandelier remind us more of an artichoke (which contains no seeds). They do not resemble the leaves of a pomegranate tree but the uppermost row contains pointed leaves mimicking the outlines of the lancet arches just above the knob.

It would not be unprecedented for a furniture designer to invent ornamentation that is pleasing to the eye and inspired from actual fruits or vegetables but present only in the land of fantasy. After all, Gothic style in the 19th century was all about fantasy, such as the stone grotesques (both gargoyles and chimeras) designed by Eugène Viollet-le-Duc to grace Notre Dame de Paris.

A variation on the knob's theme of leaves and seeds is turned upright and appears in the form of figures sitting atop the base at the point where each of the eight arms thrusts outward from it. At the bottom of each figure is a row of six circles, perhaps representing two-dimensional seeds. These rows mirror the ornamentation on bands at the top and bottom of the central column. In this guise, the three-pointed figure begins to resemble a fleur-de-lys, but with seeds visible within each lobe. Or perhaps the head and torso of a helmeted man with large shoulder pads?

Whatever the designer had in mind, these elements of the base are imaginative and intriguing as well as beautifully carved.

One of these diminutive figures was knocked off the chandelier but has been remounted and reinforced thanks to an invisible repair.

Viewed from the side, the base of the fixture includes Gothic tracery in the form of a trefoil, triangle-shaped figures with cusps, shown on top of one another. These occur in between where the arms connect to the base. As with the lancet arches, each of the elements of tracery is contained within a larger shape — this time a modified triangle.

The arms are graceful and curving, ornamented with acanthus leaves where they join the base — as if the arms are growing out of a plant. While strictly speaking the acanthus leaf is planted firmly in the vocabulary of Renaissance design, its inclusion here is an affirmation of the pleasing mixture of elements from both the Medieval and Renaissance eras as adapted for the 19th century revivals of these styles in France.

Unusual for 19th century pieces, this one has a name on it, "A. Dumez." We have not been able to learn if this was the designer, the maker of the fixture, or perhaps the name of the workshop where it was made.

While this may be one of the smallest pieces we have offered, it is no slouch in terms of the richness of ornamentation and the originality of elements resulting in a triumph of Gothic design and of modern utility.

When the chandelier arrived from France, one of the arms had broken off. It was not a clean break but we were able to have it repaired expertly with the result that there is no weakness. The repair is barely visible and only when viewed from above.

The break revealed the complexity of the construction of the fixture's arms, with channels carved for routing the electrical wire through them from the central column to their tips. It was a reminder of why we find so few of these magnificently carved, large wooden chandeliers today. If an arm came off, it was probably impossible to find someone capable of repairing it and so into the poubelle it went. Thanks to careful preservation, we are happy to have the chance to postpone the demise of this remarkable example.

A Note about Fragility and Shipping.

This item will need to be safeguarded for shipment by being packed into a custom-made wooden crate. The shipper would build it as part of the packing for transport and delivery. Our preferred shipper is Plycon Transportation Group, which would provide a binding quote in advance.

Electrified for modern U.S. homes, this chandelier is perfect for illuminating family gatherings and gracious entertaining for generations to come. The exquisite details are sure to provoke many an interesting conversation about Gothic style. Although the massive buffet cabinet and the unusual dining chairs have been sold, the dining table and the fireplace remain available to be reunited and illuminated by this remarkable piece.