Dragon Barometer 5183T in the Style of Viardot 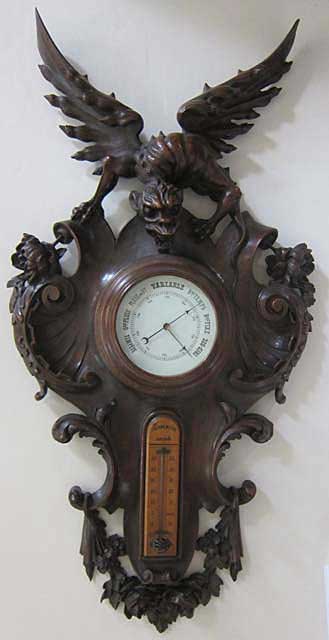 From the following photos, comparing the dragon atop a mirror by Gabriel Viardot on display at the Musée des Arts Décoratifs in Paris to the one atop this barometer, it is evident that whoever made our piece has copied the design of the dragon directly from Viardot's. The rippling flesh on the backs of both dragons, the sense of coiled energy in their poses, the muscular legs ending in splayed claws grasping the frame, the outstretched wings, the heads arched menacingly upward with mouths open, are all enthralling characteristics that confirm the relationship of these two works of art. That the creator of our piece was able to sculpt it so intricately, when translating the larger-scale dragon of the mirror to the small scale of this barometer, is nothing short of a marvel. Exquisite modeling and precise carving make both of them masterpieces of 19th century craftsmanship devoted to conjuring dragons and the fantasy they inspire.

Detail of dragon atop Viardot mirror

Detail of dragon atop barometer

For more about Gabriel Viardot and his history with furniture and decorative items involving dragons, see mirror 5304.

Perhaps this barometer was part of a set that included a large mirror but for us it stands alone and evokes the same emotions as when staring at Viardot's original in the museum.

The creator of this smaller piece has adapted well considering that his palette is the frame for a barometer and a thermometer rather than a large mirror in the shape of a crescent moon. For example, instead of the luxuriant tail curling along the left side of the mirror at the museum, our dragon must content itself with a diminutive sliver tapering away on the right side of the frame.

Dragon's tail on the Viardot mirror

Dragon's tail to the right of the barometer dial

Below the dragon, the barometer takes on a mannerist air with intricate carving of scrollwork and blossoms, as well as trompe-l'œil drapery and a flower garland evoking the stuccoes designed by Rosso Fiorentino for the Galerie François I at the Château of Fontainebleau south of Paris. We find it a glorious mash-up of fantasy and classic ornamentation.

The barometer still functions although the thermometer has seen better days. As far as we can tell, it was an alcohol or "spirit" thermometer and this medium has evaporated over time.

We enjoy imagining an era, before websites or forecasts on television, when the owners of this piece would consult it when planning daily activities based on what the barometer predicted. To be greeted by this exquisite dragon each morning must have been a delight.

The piece is not signed nor is there any marking that would help us to identify the artisan or workshop that made it.

As the photos, below, reflect, there are some small holes caused by insects. Our tests have confirmed that there is no current infestation. There are no breaks or repairs, leading us to conclude that this piece was treasured and safeguarded by those who owned and utilized it for generations in France.

This small barometer evokes in a smaller and more portable form all the mystery and drama of Viardot's grand mirrors.