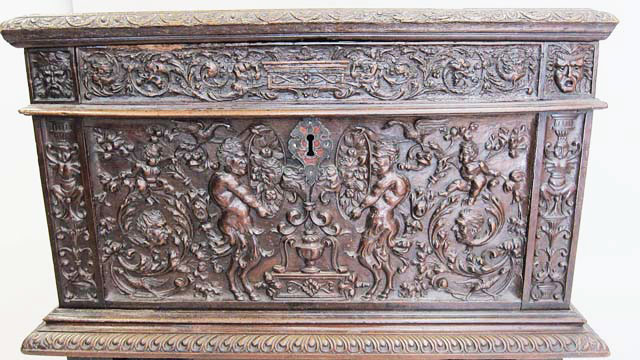 Made of oak, almost every inch of this chest is carved, mostly in low relief, in what could be considered a master class in art of the Première Renaissance in France. For more about it in the context of a post-Gothic Europe, see Stylistic Origins.

While the seller of this chest dated it to 1880, we suspect that it is significantly older although not dating back as far as the epoch of the Première Renaissance (1490-1530). Given the extent and artistry of the carving, we believe it was made several hundred years ago to copy Renaissance-era chests in French museums or from designs found in books circulating around northern Europe. That the oak panels comprising this chest are unusually thick and the presence of an ingenious locking mechanism indicate that it was meant to fulfill the role of protecting securely whatever was placed within it. The key is large, complex, and very old.

This chest combines two distinct styles characteristic of the Première Renaissance. The front boasts intricate carvings of swirling vegetation and mythological figures. This style, known in French as rinceau de volute, comes directly from the "grottoes" of Rome where Renaissance artists drew inspiration from ancient frescoes. It gives no hint that the other main motif of the Première Renaissance — large portrait medallions — would be relegated to the sides.

We delight in every detail, propelled from one virtuosic element to the next — candelabra, mythical figures, vases, volutes and tendrils, birds, acanthus leaves, masks, putti, as we are reminded what decoration meant both to artists and owners of furniture. In a time before mass production, mechanized manufacturing, and computer-aided design, talented craftsmen conceived and executed pieces such as this, demonstrating their own delight in the Renaissance style and their domination of all its intricacies, to make a timeless piece of furniture for its one-time owners and future generations to treasure.

The central scene of the front of the chest involves two slouching satyrs who face each other amidst the rich foliage characteristic of grotesque decoration. Popular in Greek and Roman mythology, satyrs were bearded figures with the upper body of a man and the lower of a goat or horse (including hooves). They were known for hanging out with Dionysus, the Greek god of wine and fertility (in Roman mythology, Bacchus), and participating in the orgies he was notorious for organizing. Figures of satyrs were found commonly on furniture of the Renaissance as well as in paintings, sculpture, ceramics, and tapestries of that time.

The clean-shaven satyrs are at the center of attention on the front of this chest. They are not mirror images of one another even though each one is represented as holding a mirror in which a bearded version of his face is reflected. Our research has revealed no ancient myth linking satyrs with mirrors so we prefer to create our own context based on the Renaissance in France. One of its key figures was the physician and astrologer, Nostradamus, who was born in 1503 in Saint-Rémy de Provence. Famous for his prophecies and predictions, including from using a "scrying mirror," perhaps a peek into the unknown is what the satyrs on this chest are attempting. Is it a future in which their beards have grown back? Or are they simply admiring themselves as they used to look in the past, symbolic of male vanity? In any event, these are interesting images chosen by the designer of this chest or perhaps by the patrons who commissioned it.

Between the satyrs is an arabesque motif consisting of a base topped by a vase from which some foliage connects to the mirrors that they are holding. Above that is the lock with an elaborate escutcheon and above it another box-like shape is at the center of a long horizontal panel.

Moving outward and beyond the satyrs are the motifs made up of spiraling bits of vegetation, key to the rest of the ornamentation on the front of this chest. The motif was used commonly on Italian chests in the Renaissance, typically depicting acanthus leaves whose girth is significantly wider than on this chest. Ultimately, the motif dates back to carvings on stone sarcophagi used by ancient Romans to bury their dead.

Sarcophagus from the Altalya Museum (Turkey)

These swirling bits of foliage convey a sense of energy, not unlike the satellite photos of spiraling hurricanes that sweep ashore each summer along the Gulf of Mexico near where our collection is housed. Each putto appears to balance precariously atop a swirl as if surfing on a hurricane-induced wave and hurtling toward the shore. While not mirror images of one another, they are portrayed with energy, their hair tousled and their hands reaching out to grab bits of foliage just as parts of stems and flowers brake away from the spirals. Appearing to materialize from the centers of the spiral are disembodied heads, clean-shaven and with lots of hair. Are they meant to represent the satyrs at some earlier point in time?

A chest — or at least the preserved front of one — made during the early 16th century out of walnut and on display at the Museum of the Renaissance in Ecouen, has similar spiral motifs and is described as having "two genies."

A complete chest, with a similar motif on the front, was part of the collection of the industrialist, Michel Boy, included as item 2841 on page 161 of the catalogue for the Retrospective Exhibition of French Art at the Petit Palais as part of the Universal Exposition of 1900. 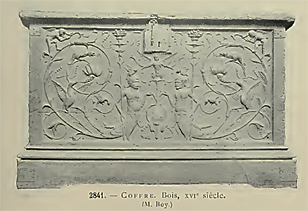 The spiral motifs with putti remained popular in France as stylistic elements of Italian grotesque decoration throughout the 16th century. As embraced in France, they appeared in various branches of decorative arts both during the Renaissance and the revival of the style in the 19th century, especially from the factories at Blois and Gien. 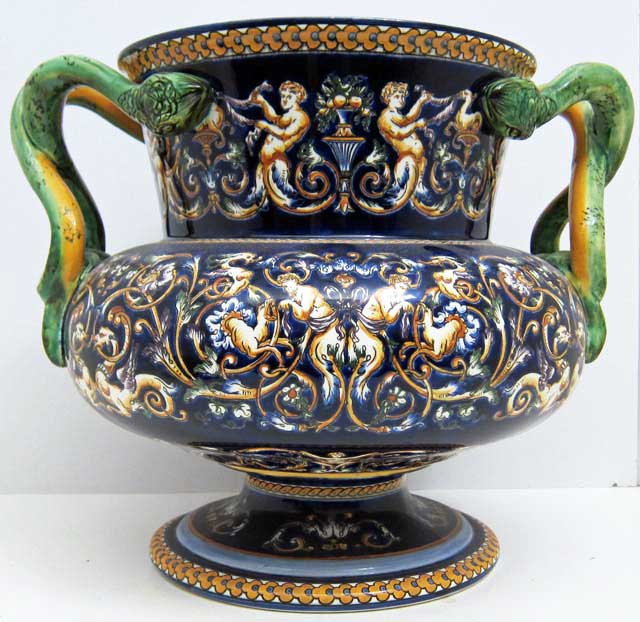 Birds, another favorite element in grotesque decoration, appear at the outer limits of the spiral motifs on both sides of the front of the chest. The bird in the upper part, with its long, curving neck, appears to be a swan launching itself in flight. At the bottom, and at a lower altitude, is a different type of bird running as if to catch itself in the up-sweep of the spiral.

Such birds appeared often in decoration, especially in the ceramics (maiolica) produced at the Fontana workshop in Urbino in the 16th century. They were especially common in the borders of plates and dishes or framing the central scenes of vases. Whether in flight, standing, or running, such birds enriched the decorative vocabulary of yet another form in which grotesque decoration of ancient Rome was embraced by masters of the Italian Renaissance. The same motifs were employed in France, including in the 19th century by artists at the ceramics works in Blois and Gien. 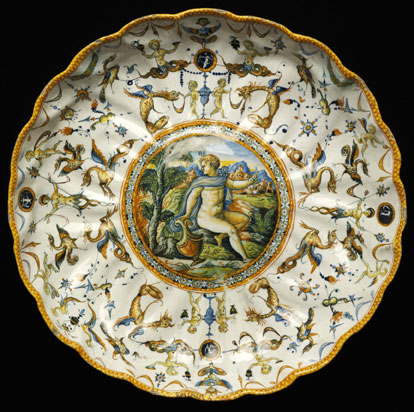 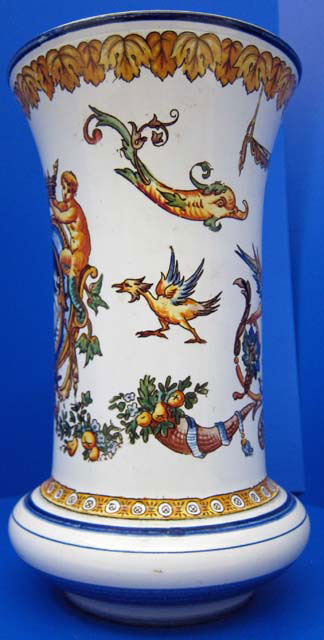 19th Century Vase by Gien from our Collection

The spirals on this chest are effective at forcing our eye to follow the action all over the front of the chest, from one side to the other, and rewarding us with a wealth of intriguing figures.

At either side of the front of the chest are carved pilasters in the classic sense of grotesque decoration popularized by Raphael in rooms at the Vatican and the Villa Farnesina in Rome. They involve a central candelabrum on which a figure squats. Elements of foliage surround it and substitute for arms, and even ears, of the crouching figure.

Above the fray is a long narrow panel, less refined in its carving but rich in elements of grotesque decoration including spirals and barely discernible winged creatures on either side of a central box. Harking back to the ancient Roman origins of the chest, perhaps the central box is meant to symbolize a sarcophagus and the winged figures on either side represent angels by a tomb?

At each end of this panel along the top of the chest's front is a grotesque mask. In keeping with the designs found in the ruins of homes in ancient Rome and Pompeii, both masks involve open mouths and wild hair-dos. The purpose of these decorative motifs apparently remains unclear to art historians but their popularity has endured.

The style of the side panels of this chest is completely distinct from the front although within the confines of the Première Renaissance in France. It consists of portraits in profile framed in circular medallions. Ancient Rome was the source of this style associated with coins bearing a likeness, in profile and often with a helmet symbolizing a military campaign, of important leaders. In the Renaissance era when the style first took hold in Italy, the owners of chests enjoyed having their likenesses treated as similarly important and putting their stamp on furniture for the ages. This practice followed when the style swept northward into France.

Oriented from the front, the left side of the chest is made up of a framed likeness, in profile, of a woman's head. The right side is of a man's head. The detail, including their intricately carved headgear and hair, is cleaner and more precise than the carving on the front of the chest. This leads us to believe that the side panels may have come from a different chest, perhaps one that dates to an earlier time.

Surrounding the medallions containing portraits is a square frame in which empty space between the two elements is filled by intricately carved foliage. The chest's handles have been secured to the upper portion of the medallions framing the portraits and can be shifted upward so as not to obscure them. At either side of the side panels are tall palm fronds, another ornament commonly found in ancient architecture and adopted into the Renaissance vocabulary of stylistic elements.

Above the portraits are horizontal panels mimicking the one on top of the front panel of the chest. Here, however, the central element is a vase instead of a box. The elaborate and intricate carving of tendrils of foliage unites the sides of the chest with the style used for the front.

Overall, the condition of the chest is very good. There are some minor scratches on the front but nothing unusual given its age. It opens and closes smoothly.

As we have learned over the years, examining and understanding the details sculpted into wood on pieces such as this chest only serve to increase our appreciation for the dedication of French artisans to preserving styles of the past in furniture we can use and enjoy every day.

This chest would be ideal for placement behind a couch or at the foot of a bed. Given its rich carving, it would command pride of place in an entryway, for example, between Armchairs 4149. Ideally, it should be visible from the front as well as the sides since the side panels are so exquisitely carved.