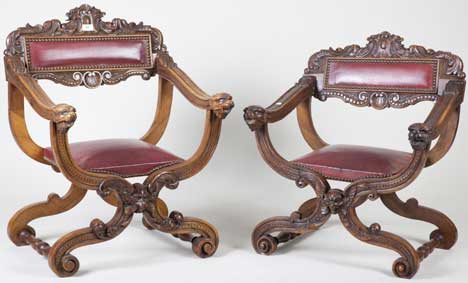 These chairs are old (possibly dating as far back as the middle of the 19th century) and are French through-and-through, but boasting a number of intriguing design elements from Italy.

In overall structure, the chairs can be classified as fauteuils Dagobert after the style of throne used by King Dagobert, the first of many kings of France buried in the Basilica of Saint-Dénis outside Paris. A replica of his throne is still on display in the Basilica. In English, the chair is also known as a curule, dating back to ancient Rome when it was sat upon by high-ranking dignitaries.

During the revival of interest in Renaissance style in the 19th century, the Dagobert design was embraced by furniture makers to show a direct link to earlier times just as the revival of Gothic style was sparked by a restoration of Notre Dame de Paris by Eugène Viollet-le-Duc. As part of that revival, the 19th century version of fauteuils Dagobert typically includes a back so that ruling from it could be more comfortable.

The Renaissance revival also re-ignited interest in the styles popularized by other rulers buried at Saint-Dénis such as François I (1494-1547) and his son, Henri II (1519-1559). Both kings were enthusiastic proponents of Italian style and enticed to France the likes of Leonardo da Vinci, Rosso Fiorentino, and Francesco Primaticcio. The latter two artists worked at the royal palace of Fontainebleau, initiating a revolution in furniture design that would last for centuries thanks to the books of prints and engravings that memorialized the elements of their styles.

In particular, Rosso Fiorentino introduced to Fontainebleau an array of figures and decorative elements as part of the stuccoes surrounding the frescoes in the Galerie François I. Some were full figures, reclining, as do the two on either side of the center part of the tops of these chairs.

Others were merely faces or masques such as those uniting the "X" members at the front of the bases. Rosso also made generous use of curls such as those on the bases of these chairs where they touch the floor.

The chairs were purchased at auction in France but without any background story of where they originated or who had commissioned them. Because the chairs are slightly different in terms of height, we are led to speculate that they were crafted for children born a year or two apart into an aristocratic family. The reason for the difference in height may have been to pose the children on the chairs for a joint portrait -- whether by a painter or a photographer. In the late 19th century through the first decades of the 20th, children were typically depicted in formal attire on such elaborate seating. And what better pose for the scions of a noble family than on chairs fashioned after a royal throne?

The wood itself is a rich walnut whose grain is almost invisible. This is further evidence that the chairs could be as old as late 18th century. The red covering is likely leather but we cannot verify this without damaging it.

These chairs could be used as seating for young children or simply enjoyed for their beauty as part of an ensemble with other chairs in the fauteuil Dagobert design.